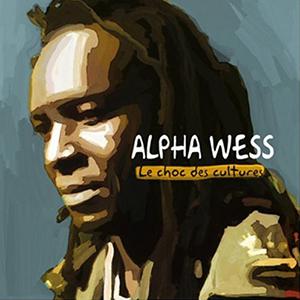 Makasound firmly keeps its focus on Africa. After releases by, among others, Takana Zion and Manjul, they are now introducing Alpha Wess. This native of Guinea Conakry's Dixinn district dreamed of a career as a writer, but in a country with an illiteracy rate of over 60% he realized that that was not the ideal way to spread his message. It was in music that he found a much more convenient medium and what genre better to bring accros a revolutionary message than reggae? In his native Susu language Wess describes things as he sees them, undiluted and without apology. Often recurring topics in his songs are subjects like freedom of expression, universal human rights and the sale of Africa's natural resources. His rhetoric has made him anything but popular with Guinea's ruling elite and after a shooting incident (read: assassination attempt) Wess made the best of a bad bargain and asked for asylum in France. There he had to start from scratch again, eventually leading him to Makasound. Fans of the recent wave of African reggae releases, will surely be able to flavor 'Le Choc Des Cultures', although Wess' narrating singing style might not be to everyone's taste. Another high level African release!