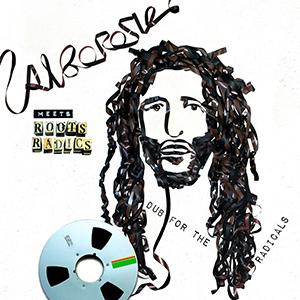 For a number of years now, Alborosie always provided us with a dub version of his most recent album, but for last year's release of 'Unbreakable', an album for which he collaborated with The Wailers United, he breaks with this tradition. For the appropriately titled and completely self-contained 'Dub For The Radicals', Pupa Albo joined forces with bassist Errol 'Flabba' Holt and the other members of Roots Radics. Not surprising then that several of the dubs got a strong Roots Radics flavor, like 'Midnight Dub Ravers', echoing Gregory Isaacs' 'Night Nurse', or 'Shotta Man Dub' sounding somewhat like John Holt's 'Police In Helicopter'. Our personal favorites: the bleeping 'Surveillance Dub', the aforementioned 'Shotta Man Dub', and title track 'Dub For The Radicals'. In conclusion we'd like to draw your attention to the original sleeve design for which a portrait of Alborosie was created, composed of magnetic tape as it was used and is used in recording studios.