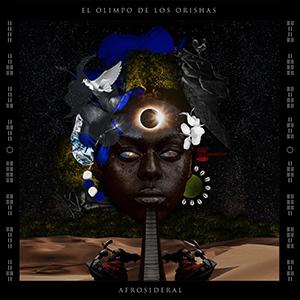 Afrosideral is the pseudonym of Dasari Kumar Mora, a Cuban who emigrated to Madrid, first made a name for himself in the hip-hop scene under the name Kumar Sublevao-Beat and already gained experience with bands like Havana Cultura, Afrikun and Electrorumbaiao (to name but a few), but with 'El Olimpo De Los Orishas' now takes a completely different musical route. On this album the man ingeniously mixes the Afro-Cuban musical tradition with influences from hip-hop, jazz, dub and especially electro, in a musical ode to the various Afro-Cuban orishas, supernatural divine beings from the popular santeria or lukumi religion known for its rhythmic chants, dances and liturgies, always accompanied by drumming on the batás or añas. The album only counts 7 tracks, but can be enjoyed as one elongated spiritual trip, for which Kumar invited the appropriate guests where necessary. For opener 'Osain Maribo' he invited Cuban percussion veteran Dreiser Durruthy (Irakere, Chucho Valdez), in closing track 'Eshu Odara', Cuban women's quartet Sexto Sentido can be heard, and he recorded 'Ode Ne Ire' in collaboration with New York based DJ and label mate Nickodemus. Finally, there's 'Filho Do Mar', a song meant as a tribute to the countless slaves that were brought across the Atlantic Ocean in inhuman conditions to work as slaves in places like Cuba and Brazil, and the only track on 'El Olimpo De Los Orishas' in which influences from the Afro-Brazilian music tradition and capoeira can be heard (for which Kumar collaborated with Brazilian musicians Alan Sousa - percussion and Jurandir Santana - guitar). It doesn't get more mesmerizing than this and 'El Olimpo De Los Orishas' is one of our absolute recommendations for 2019!