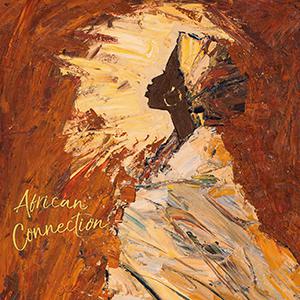 The story of African Connection started back in 2016, when members of Danish band Junglelyd decided to accompany Ghanaian musician Atongo Zumba for a tour in his home country. The chemistry evolved from being on the road together and sharing the stage for a month, proved so strong, the Danes decided to turn it into a permanent project. They extended their stay in Ghana, got a number of other musicians involved, and African Connection was born. Atongo Zumba has since disappeared from view again, but the Danes of Junglelyd (Lasse Aagaard - guitar, Lasse Enøe - saxophone and flute, Olaf Johannes Brinch - saxophone) filled the void he left with the presence of American keyboardist/percussionist Maggie Cawley, and for some Ghanaian flavor: bass player/vocalist Abdulai Issaka Kyemtore, guitarist/vocalist Kwass Dankwah and drummer, percussionist and vocalist Frank 'CCYoYo' Ankrah. Where African Connection's sound is concerned - a blend of highlife, funk, afrobeat, rock and Ghanaian traditionals - the latter probably plays the most important role as he's a student of grand master Tony Allen and in the nineteen eighties still played with Fela. In the year that saw #MeToo grow from a simple hashtag into a female revolution, the title of this long player debut, meant as a symbolic stance against the global oppression of women, is certainly a statement. The artwork African Connection used for the cover of the album, was designed by Ablade Glover, a renowned Ghanaian artist known for his portraits of Ghanaian women: "...if you notice, you see a lot of women in my work and people do ask me, why do you paint so many women? The first time I was asked the question, I didn't think about it. I just opened my mouth and said because they are more beautiful than one. That wasn't a serious answer. It was later, thinking about it, that it struck me they have courage. Women of Africa have some courage and they show it. When they walk the street, they are elegant. They are courageous, they are brave. When they are going about, they show it. We don't do that, do they?". On 'Queens And Kings' the vocalists alternate between English, Ewe, Ga and Hausa, drawing musical inspiration from African greats like Fela Kuti, Tony Allen, Mulatu Astatke and Ebo Taylor, but also Western bands like The Meters, The Who, The Doors and Led Zeppelin. Because of the language barrieer, we unfortunately can't tell you much about the content of the songs on 'Queens And Kings', but we can assure you it's a groovy little album. Our personal favorites from the track list: the solid 'Babanato', the groovy 'Dabina Meka', and of course their 'Fela Tribute'.