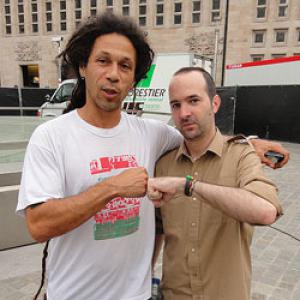 Neil, to start this interview, I want to take you back to where it all started. At the time you were studying biochemistry and had no experience whatsoever in music. How did you make that sudden transition from academics to music?
Neil Perch: "I think first and foremost you have to be a fan of music, which I was and I attended a lot of concerts as well, but the seminal moment was when I went to my very first sound system night and saw Jah Shaka play for the very first time. That night I made a quantum leap so to speak in my understanding of how powerful music can be. It's funny when I think back, because honestly the first time I saw him play was a three-way sound clash and I only heard him play half a dub plate!"

Dubheads will often put forward Jah Shaka as the absolute top of that sound movement, but in your view, what is it that sets him apart from all others?
Neil Perch: "First of all the sheer amount of energy the man had and still has. In his prime he used to play his sound two or three times a week, which I can tell you is no mean feat! Secondly there's the depth he managed to take his sound musically. Shaka really manages to squeeze out everything his sound system has to offer. He can take the electronics of the p.a. and give them an almost psychedelic twist and manages to turn his sets into complete sensuous experiences. On top of all that he plays his music with complete devotion and that still adds to the power of it all."

With Zion Train you never really played reggae music, but walked the dub path from the very beginning.
Neil Perch: "Yeah, absolutely and the two are also very different. I might be a bit of a purist about it, but I don't necessarily enjoy music that feels the need to empower me on a lyrical level; to me it's all about the power of the music itself and that is best illustrated when you play it purely instrumental."

There have always been two sides to Zion Train; going back and forth between band and soundsystem gigs. What's the difference for you as an artist?
Neil Perch: "There are huge differences to be honest. When I play with live instrumentation, my instrument is the mixing desk, but when I play on sound I use my own custom build p.a. system. The difference is only in the execution though, because we always try to create the same vibe. When I'm on stage with a band I'm one of the musicians, but when I play on sound I'm also part technician."

You're a nicely dreaded up vegetarian, so I have to ask: How much of a Rastafarian is in Neil Perch?
Neil Perch: "Absolutely none at all! I don't subscribe to any kind of faith except for my own personal faith in mankind and the planet we live on. I respect all faiths and have strong opinions about all of them, but the details of that is not something I feel comfortable sharing in public. I think you can find positive elements in just about all faiths though. In Rastafarianism that is the power of self, the power of the one where anyone can be divine. Some would call that the divinity of the soul, but Rastafarians know it as the concept of I&I. I'm no expert on any of the religions, but the only thing required to live a spiritual life is positivity really."

Something that somewhat defines what Zion Train is about is the fact that from the very beginning you've been independent. How important has that DIY-spirit been in the history of Zion Train and how difficult has it been to maintain that status?
Neil Perch: "Every day is full of choices, isn't it? We've had offers in the past and depending on the circumstances, we decided to go with them, but on other occasions we've steered our own course. I like to think I've learned from all those experiences. If you deal with art in a commercial world, then independence becomes a very coveted commodity, because financial independence means having the power to keep your art your art instead of corrupting it to suit the ideas of someone else. Of course it's easy for me to say, because by doing the music I want to do I manage to make a living. Your musical identity should never be compromised by money though, as it takes the light and soul out of the music. I guess these days being an independent musician is easier than ever, but getting your music heard is still as difficult as it ever was."

Your most recent album to date, 'State Of Mind', is definitely one of the more roots sounding album in the discography of Zion Train. In what state of mind were you when you started working on the album?
Neil Perch: "Quite a relaxed state of mind to tell you the truth. (laughs) With the 'Live As One' album and the remix project that followed it, there was a lot of work involved with a lot of different musicians and to top it all off the album release was followed by a big international tour that lasted for close to two years. It stands to reason that when I started work on 'State Of Mind' I was in dire need of some relaxation, but at the same time I also wanted to try some new things. In the case of ‘State Of Mind' those new things turned out to be the addition of more acoustics and more strings and a bit less vocals then ‘Live As One' had. I guess in a way it was about getting back to the original Zion Train sound, so back to our roots anyway. (laughs)"

The track list of 'State Of Mind' includes covers of Winston Francis' 'Let's Go To Zion' and Aswad's 'Rainbow Children'. Why those songs exactly?
Neil Perch: "Misty In Roots and Aswad were just about the only performing roots band when I was a teenager. The album 'Rainbow Children' was on, 'Showcase', was a seminal album in British reggae. Bands like Aswad and Steel Pulse were the voice of the black ghettoes in the UK. With the Winston Francis tune, I wanted to extend his essentially Rastafarian message into a state of mind that would apply to all people regardless of their faith."

You've been living in Germany now for a while. It's often said the reggae and dub scene in the UK these days is just a shadow of its former glory. Is that the reason why you decided to leave?
Neil Perch: "No, I left partly because I felt I needed a psychological change from England - like anywhere else the UK has great deficiencies and after having lived there for over thirty years I'd started to notice them too much for my liking - and also because my wife is German. Even when I was still based in the UK we still depended on the global dub scene in the rest of Europe to survive. There's absolutely no dub scene in Germany; we maybe play there once a year, when at the same time we still have several dates a year in the UK. That kind of puts things into perspective a bit."