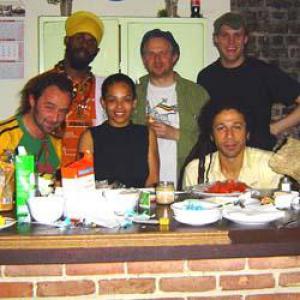 Molara, as an introduction, could you maybe describe in your own words the music Zion Train makes?
Molara: "Heavyweight sound system music mixed with dance influences, that's how I would describe it."

We can't really say that you play pure dub steppers like Bush Chemists for example. Is stretching those musical barriers important for Zion Train?
Molara: "What's the point of being stuck in one small corner of music? When you live in a city like London and you walk down the street or when you travel around the festivals of Europe, you hear Turkish music, Chinese music, Italian music, dub, hip hop and trance and then to say: "I'm going to close my ears to 75% of what I hear and just focus on the little 25% that's left!", is to limit yourself musically. I can't understand that. I could understand why people would do that for a commercial reason. If you want to produce commercial pop and you want it to work, you have to stick to a certain formula."

What were the inspirations for that? Where did Zion Train draw from?
Molara: "From a lot of Jamaican music from the seventies, people like King Tubby and Prince Far I and particularly Jah Shaka Soundsystem in the late eighties, early nineties. We heard the music of Russ Disciple who played a lot of Jah Shaka tunes and then we encountered Dougie (Wardrop, red.) from Bush Chemists who really showed and taught Zion Train how it was done. Thanks and respect to those people every time!"

Zion Train is almost into anything from T-shirts over websites to producing your own music. You guys do all those things yourself, is that independence of great importance?
Molara: "Yes totally. We've just started diversifying recently, but musically we've always been independent. Having our own studio, we started to run that as a professional enterprise and that has kept growing. Now things have changed a bit, but generally there's still the same vibe in Zion Train."

The marihuana leaf is often featured on Zion Train's album sleeves. How important is the herb in the whole Zion Train scene?
Molara: "It's not as important as it used to be because of the way how it is treated nowadays by the governments of a lot of European countries. In the U.K. marihuana is of the A-list now. Here in Belgium you're allowed 3 grams I think and in Holland it's been fine for a long while. The attitude of politicians and the way it's talked about has changed. It's something natural and we should have it. In my opinion drugs that were or have to be processed are a different thing, but we're talking about a plant that you can put on your balcony and grow, here! It's not of massive importance, but in the past when people were still being arrested just for smoking a spliff, it was something Zion Train was very vocal about."

I noticed your website is called www.wobblyweb.com. Why not just www.ziontrain.com?
Molara: "Well, that has to do with the origins of Zion Train. Perch had a soundsystem that was called Zion Train and he was invited to play at dance nights with a mix of eclectic music called: Wibbly Wobbly World of Music. That also became the name of the Zion Train studio and hence Wobblyweb was born."

The website is broader in content than just Zion Train. What is on there in short?
Molara: "It's more or less all different record labels. The Zion Train label was called Universal Egg when more and more dance influences entered our music. Universal Egg then had a little baby called Deep Root, which is a strictly 7" label releasing roots tunes. It's a collection of all those small side projects really."

Someone whispered in my ear that you yourself are involved in a whole new project. Can you lift the veil a bit?
Molara: "Yes, I can! I started a solo band a couple of years ago, moving very slowly sort of drifting along really, but I got involved now with the bass player of the Headmix Collective and with one of their singers as well as with the drummer of Dubmerge. We do some roots music, some more soulful tunes and there are even some drum 'n bass and jazzy elements. It's basically for me to sing really because in Zion Train I do an amount of singing but there's a lot of dub effects and other stuff too, when this is just me singing and having a bit of a blow-out. It's very different because I can't leap up and down like a lunatic, I really have to focus and regulate my breathing."

And what is the project called?
Molara: "Molara, my name."

Should we be expecting anything on CD or vinyl soon?
Molara: "You should definitely expect something on CD. I'm working on an album with various exciting people like Mad Professor for example; Russ Disciple is going to do a couple of tracks, Ben Balafonic from Dreadzone is there and I'm hoping to do a collaboration with a Polish band called Kapela Ze Wsi Warsawa (Warsaw Village Band, red). So it's going to be quite an eclectic mix of people working on it. It will be ready when it's ready, but until that time there are a lot of things on my website www.molara.co.uk. It's not just me, our trumpet player, Dave, just finished a new Love Grocer album, Neil is running his soundsystem, Abassi Hi Power in Cologne. The musical Zion Train family spreads out!"