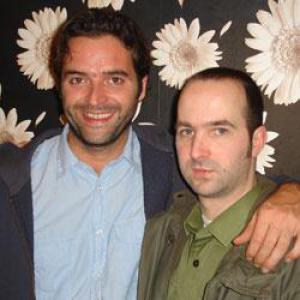 In Dutch "zeker weten" means something like "I'm sure" or "I'm convinced", and that's exactly what we were from the first time we heard Zeker Weten's music. When Simon Pleysier (guitar & vocals) and Fritz Standaert (guitar & vocals) presented their debut album at the Arenberg in Antwerp, we simply had to be there.

Simon, the album is finally out there. How much effort has that taken?
Simon Pleysier: "Well, in any case it has taken us quite some time. Last year we hastily put a demo together, but when the radio started plugging 'Liefde Is Overal' ("love is everywhere", red.) as a single, our first priority was getting together the right people to play the music on stage with. We didn't really see the hype that that song created coming, so it caught us off guard a bit. From out of nowhere the song was suddenly been played up to three times a day. The past summer we played about thirty concerts and it was only after the festival season ended that we had the time again to reflect on recording a real first album, this time including the musicians that now made up our live band."

Zeker Weten plays afrobeat, soukous, reggae, highlife, funk and I've probably still left out a few. In which section of the record store would you like the album to end up?
Simon Pleysier: "Well, I think above all else what we play is dance music or at least danceable music. My personal preference goes out to soukous and Congolese rumba, two genres that are an absolute godsend for a guitarist. It all looks dead simple from a distance, but really it's everything but easy."

Admittedly, you do often look quite serious when you're playing one of those riffs on stage. How difficult is it playing a white Congolese?
Simon Pleysier: "Difficult enough, that's for sure! Dance music in general is not easy to play live, mostly because you have to try to play the same beat or rhythm until the end of the song. The melody you play can be very simple, but you have to keep on repeating it for minutes, so it takes a lot of focus and concentration. When I played with Tony Allen (former drummer of afrobeat legend Fela Kuti, red.), I was amazed at how far these kind of musicians have taken their skill; seemingly effortless they turn you upside down with their never-ending rhythms."

Like you just said, the whole Zeker Weten story entered in higher gear when 'Liefde Is Overal' suddenly became a radio hit. Did that really happen totally unexpected?
Simon Pleysier: "It sure did, yes. We weren't signed to any record label yet and the demo we sent to the radio stations was something Fritz and I had hastily put together at home. When you send a demo like that to a big radio station, the chance they will give it some airplay is very slim, but to our surprise only days after we sent it the song was already played for the first time. Once became twice and before we realised what was happening the song was repeated two or three times on a daily basis! Radio still being the powerful medium it is, the impact of that airplay we got was huge. It was definitely a surprise, but a nice one indeed!"

During the show, just before you started playing the Latin inspired 'Laat Mij Maar Gaan' ("just let me go", red.), you called out to the "guajiros" in the audience.
Simon Pleysier: "Yeah, that really started as an inside joke between Dennis (Nickles, bass, red.) and myself. Guajiros are farmers and you can find them just about anywhere; in Cuba they can be found in Pinar del Rio and here in Belgium in the Campine region (laughs). They're all really straightforward people, no-bullshit types who love a good party."

With Zeker Weten you made a conscious choice to sing in Dutch and to combine that with a style of music people don't really associate with Dutch lyrics. Why did you choose to take that road exactly?
Simon Pleysier: "The thing is, I really have to focus when I have to play my guitar and sing at the same time. If I have to add to that the fact of using a foreign language and watching my pronunciation, that becomes a bit too much of a good thing. When we started with Zeker Weten, Fritz and I quickly decided singing in Dutch would be our best option. Singing in your native tongue can also surprise at times; a lot of lyrics that sound totally normal in English get a whole different feel once you translate them to Dutch."

Your music also hints at Belgium's colonial past in the Congo. Would the Belgian Congo still exist today, you'd probably be a hit over there.
Simon Pleysier: "That past gives me a somewhat double feeling. Not all we did in the Congo was bad, but we also have to assume responsibility for the atrocities committed. I ended up listening to Congolese music after having been influenced by Ghanese highlife and Nigerian afrobeat. A lot of the Congolese bands from the fifties and sixties came to Belgium to record their albums, often accompanied by Belgian musicians. Whether we like it or not, Belgium and the Congo are indissolubly intertwined."

How do Africans react when they hear you guys play?
Simon Pleysier: "Last year we played a concert on Sint-Jansplein here in Antwerp, at an event organised in celebration of the 45th year of Congolese independence. The place was packed with Congolese people and their reactions were really encouraging. Wherever we perform, it's usually the Africans there who get the party started. Especially the soukous songs we do are quite popular."

Is there a story behind the name Zeker Weten, or was it just one of the first things you came up with when you needed a name for the project?
Simon Pleysier: "We're not really people that keep pondering for months, looking for the right band name. "Zeker Weten" was a text message I got one day when we were looking for a name. It was really only intended as an answer to a question I had asked earlier, but the words got stuck in my mind and the rest is history."

No need to make things more complicated than they needed to be?
Simon Pleysier: "Exactly! (laughs)"

Simon thanks for doing this.
Simon Pleysier: "You're most welcome."