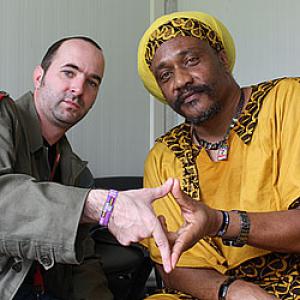 Yasus, before you started out as a poet, you worked as a telephone technician for a while and after that even went on to get another degree in telecommunications. Where did your interest in that field come from?
Yasus Afari: "When I attended the technical high I did an engineering course and subsequently got offered a job with the Jamaican Telephone Company. I started working for them in 1980. My fascination for that field really came from wanting to apply physics in a practical way; trying to use it in a tangible way and so enhancing people's lives. I then got a scholarship to study at The College of Arts, Science and Technology, these days the University of Technology, which I used to study Industrial Instrumentation. As I mentioned afterwards I went on taking jobs with the Jamaican Telephone Company and Jamaican Public Service Light and Power Company, but after a while I got disgruntled with the situation on the workplace, so I decided to focus all of my energy on developing my natural talent as a poet and try to impact people's lives on an emotional and intellectual level. I've always been someone who's concerned about humanity and believed we're all members of one human family and I wanted to use my art to propagate this message."

When you first started out as a dub poet, you performed under the name Toni Taam. Was your style back then very different to what it is today?
Yasus Afari: "That's interesting... how did you find out about that? (laughs) Toni Taam was the name I went by when I was still in college. I don't think my style was all that different from what I do today, though. Of course through the course of your career you evolve and along the way you pick up new ideas and techniques. I didn't choose that name, it was given to me and I always felt it didn't give the best description of who I was and what I stood for; Yasus Afari is much more concise and holistic in that aspect."

You did quite a few duets whit the late Garnet Silk...
Yasus Afari: "Well, my first album 'Dancehall Baptism' (1993, RAS Records, red.) had a song on it called 'People Dancing', which I produced myself, and then there's the even more popular one called 'I Can See Clearly', which was recorded by Courtney Cole of Roof International. That last song was recorded at the beginning of the nineties and helped bring Garnet Silk to the forefront of the music scene in Jamaica. I also want to mention 'I Pen', which is also the title of one of my books, another duet with Garnet I produced myself which has never been released on CD  as it was only featured on my vinyl only LP 'Honour Crown Him' (1997, Senya-Cum Records, red.). Garnet had asked me to do a video for that song and I'm still intent on fulfilling that promise."

The title of your first album, 'Dancehall Baptism', also summarizes a bit how you were hyped in those early days as the new upcoming dub poet mixing poetry with dancehall riddims. Have you abandoned that concept over time?
Yasus Afari: "No, not really, but all things evolve of course. I've got a book out called "Overstanding Rastafari" which was released in 2007 and has really changed the course of my career; I do a lot more workshops, research and spoken word performances now. I rarely go out to chant alongside a sound system anymore. My concept was always to overwhelm negativity with positivity, be it in the dancehall, the classroom or even in prison. I'm also an ambassador to the parliament of world religions; we just had a meeting in Melbourne, Australia and the next one will be right here in Brussels in 2014. Again it's "Overstanding Rastafari" which has given me access to these platforms to which I didn't have access to in the past. I have some plans though to reenergize my experiments with dancehall by using the dancehall as a workshop space. A lot of dancehall artists come from so-called underprivileged parts of society and haven't really been given the tools of social empowerment offered by education. I know a lot of these artists on a personal level, so I can ask them man to man: "Are we really being the best we can be?" We have to look at our history, see where we came from, what we've already accomplished, but also what could have been and where we would like to be. I don't want to put down dancehall music, but we have to dare ask ourselves what lasting legacy the message we're putting out there is going to have on the impressionable minds of our youths. The same is of course true for other media; things like Hollywood cinema or the internet for example."

What inspired you to write "Overstanding Rastafari" and what did you feel you could add to the books already out there?
Yasus Afari: "I had submitted a proposal about using "edutation", meaning the fact of using art and entertainment to educate, in Jamaican high schools, to Bertram Whiteman, who was at that moment the minister of education, youth and culture. He accepted the proposal and from there it developed into the cultural agency programme, which made us go into the schools to try and change values and attitudes and self-esteem and self-confidence issues. By spending so much time in the schools, I noticed that the books they were using to teach the youths about Rastafarianism were often outdated and more importantly seldom written by Rastafarians themselves. I just felt that wasn't good enough and in essence the book developed from the idea to want to offer an answer to that deficiency. I tried to make "Overstanding Rastafari" a comprehensive reflection on Rastafarianism from someone on the inside. It's something that wasn't done all that often yet, so I definitely think I could make a difference there and the success the book has had so far can count as proof of that."

You're also the driving force behind your own annual poetry festival called Poetry In Motion.
Yasus Afari: "The idea behind that festival was to bring poetry together with other forms of cultural expression, like dance, music, storytelling and fashion to provide clean intelligent fun for the entire family. Again it's all about edutainment, trying to educate through entertaining. We've been organising the festival for nearly ten years now and it has been growing in popularity both with the performers as with the patrons and even with the sponsors. We've now developed a pomedy show which has been a tremendous success as well. With the proceeds of the events we organise we always try to support a needy cause and help sustain the community on an economical level as well. I've also started the Jamaica Poetry Foundation in which Mutabaruka is also involved. We want to enforce the idea that ordinary people can express themselves literally as well and although the focus is foremost on having a good time we also want the people to walk away having learned something."

When I talked to Benjamin Zephaniah and asked him when he first started putting words to paper, he stated that at first poetry was an oral thing for him. How is that for you? Where you a writer from the very beginning?
Yasus Afari: "When I was still in high school at one point I was asked to write a poem for a school project. I was born in deep rural Jamaica, a place without electricity or running water, television or clocks. To tell time we looked at the position of the sun, so I drew on that idea for my first poem which was called "The Travelling Sun". Some of my poems I've never put to paper though; I just perform them from memory, but in large I guess I'm more of a writing poet. Although even if you're more of an oral poet like Benjamin says he is, the tongue is still the pen of the ready writer (Psalm 45:1, My heart is inditing a good matter: I speak of the things which I have made touching the king: my tongue is the pen of a ready writer, red.) It doesn't matter if you write your thoughts down on paper, once you think them up they are added on the hard drive of your mind. Many deejays, who are very versatile in their lyrics, have never penned anything down. That's why I see no problem in inviting a dancehall icon like Macka Diamond, because in a way what she is doing on stage is also poetry."

In Conclusion, what is Yasus Afari really about?
Yasus Afari: "As an artist and performer I want to challenge the rest of the Jamaican music fraternity to take up responsibility for the works they turn out. As artists we should aspire to write and say things that we can still be proud of in years to come. We have to try and instil a sense of responsibility within the community of performing artists. The internet has permitted us to spread our message worldwide in a matter of seconds, so we have to be very conscientious about what we put out there and take time to reflect before we act. On a larger level I want to make people aware of the fact we all inhabit the same planet called earth, all belong to the same human family and share a common history, so wither we like it or not, we have to find a way to peacefully coexist. Never mind the colour of your eyes, the texture of your hair, the form of your nose or even your religion or sex, we all breathe the same air!"