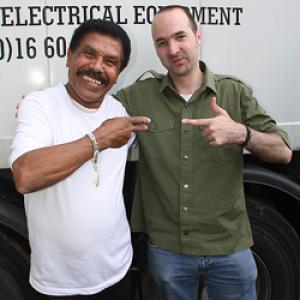 Winston, most reggae lovers will know you as being one of these iconic Studio 1 artists, but before started working at Studio 1, you found yourself working in Miami. How exactly did you end up there?
Winston Francis: "I went there with a band called Carlos Malcolm and his Afro-Jamaican Rhythms. These were still the days before reggae music was invented and there were lots of old school big bands all over Jamaica. At that time the base player of the band was still Boris Gardner and Derrick Harriot also joined for a while."

Working at Studio 1 meant working with the late Coxsone Dodd. Opinions about him tend to differ a lot; what were your experiences working with him?
Winston Francis: "Well, almost every artist who has worked at Studio 1 will tell a different version of events. As far as I'm concerned, Mr. Dodd was not only a great producer, but also a great humanitarian and someone who cared for people in general. You have to understand that at that time a lot of people in Jamaica were hardly earning a living, so a lot of aspiring artist who came to Studio 1 to do audition would even arrive barefooted and in ragged clothes, so whenever Mr. Dodd would travel to the US, he would bring back big bags of clothes and shoes. If he didn't pay you in cash, you'd always be sure to leave with some clothes or shoes. I think there's a lot of misunderstanding surrounding the figure of Mr. Dodd, because he passed on a lot of worldly wisdom. When I talk about Mr. Dodd, I always talk about him with a lot of reverence, because simply put, if it wasn't for him I wouldn't be having this interview with you here today! (laughs)"

Story goes that when Mr. Dodd heard you singing 'Mr. Fix It' for the first time, he immediately told you this would be the tune that would stay with you for the rest of your life.
Winston Francis: "What happened was we were recording some tunes in the studio - if I remember correctly I was recording my version of Bob Andy's 'Too Experienced' - and I asked him to turn up the music as I couldn't hear it. Mr. Dodd turned to me and told me: "Winston don't listen to music with your ears, listen with your heart!". After we were done recording we listened to the songs I had had voiced that day and when he heard 'Mr. Fix It' he told me: "Winston this song will stay with you for the rest of your life!" and oh was he right! It's still the nickname I'm known by till this day! Just talking about these things makes me get all emotional again. The things Mr. Dodd did for me I could never have repaid. To know that song would still be with decades after I'd recorded it proves what a visionary mind he was. When we recorded these tunes, we never imagined they would ever reach the other side of the Atlantic; our life was just then and there."

You just mentioned 'Too Experienced' there; on that tune you had none other than a young Bob Marley singing background vocals.
Winston Francis: "Bob and Ken Boothe! I had already finished voicing the tune and normally Mr. Dodd had three girls to do the backing vocals, but that day they were running late. Now Bob was waiting to use the studio to record one of his tunes and not to have to wait any longer he decided to step in and do the backing vocals for my song himself. The funny thing was that when Mr. Dodd came in and listened to the recording he remarked: "My God the girls were in good shape today!" (laughs)"

Working for Studio 1 your career seemed to be heading in the right direction, but for some reason you relocated to the UK.
Winston Francis: "One of the songs I recorded for Studio 1 was 'California Dreaming', which together with ‘Too Experienced' became hits in the UK. I guess you could say I was "following the gravy" and headed over there to do some concerts. When I noticed I could make a good living for myself over here, I decided to stay."

You even performed or recorded under the pseudonym King Cool for a while.
Winston Francis: "To be honest, that wasn't anything planned. First of all you have to know that in the reggae business it wasn't unusual for producer to put a different name on a record, just to avoid having to pay you royalties afterwards. I remember recording a tune called 'Ten Times Sweeter Then You' which Jet Star pirated and released under the name Tony Gordon. Apart from King Cool I also recorded as Wayne Vandross, Billy Cole. When I recorded the 'Stand By Me' tune with Dennis Bovell and because apparently I looked so cool in the studio they started calling me King Cool and released the single under that pseudonym. It was just a bit of fun really."

Apart from 'Mr. Fix It', the other Winston Francis tune every reggae lover in Europe still knows is 'Let's Go To Zion'. Tell us how that song came about.
Winston Francis: "Every Friday night after we had finished voicing at the studio, we used to hang out at a local bar close to Studio 1. That particular night Jackie Mittoo had stayed behind in the studio to finish one of his compositions on the piano and when I returned there the next morning I found him asleep on the instrument. I tiptoed in and slammed the piano lid down with a bang, making Jackie jump up in a fright. He told he had this wicked melody in his head and when he started playing it I immediately started chanting: "Let's go to Zion...". A little later the other musicians started coming in - Ernest Ranglin, Leroy Sibbles, Sylvan Morris - all commenting the tune sounded wicked."

Throughout your career you've been known as a balladeer, a crooner, but 'Let's Go To Zion' was a true example of a Rastafarian inspired roots song. What's you're take on the Rastafarian philosophy?
Winston Francis: "Even though I've never had dreadlocks, I've always considered myself to be a Rastafarian! In the history of Jamaica a lot of atrocities were committed and the only ones preaching love and unity throughout all that were the Rastafarians! As a kid growing up I always thought Zion was a place in heaven, but when I was singing: "Let's go to Zion!", I was thinking of a peaceful, loving community. Reggae has circled the globe several times now and has succeeded in bringing millions of people together."

August 6th 2012 marked the 50th anniversary of the Jamaican independence. What does that anniversary represent to you?
Winston Francis: "First and foremost it represents celebration, because independence means freedom. Fifty years ago our shackles were finally broken and we became a free nation. And look what Jamaica has given the world already, from sports to music; all of that greatness from such a small nation!"