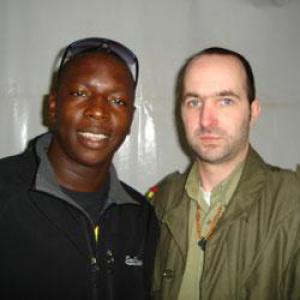 Vieux, at the beginning of your career, your father, the late great Ali Farka Toure, wasn't fond at all of the idea of you wanting to follow in his footsteps as a musician. Reconciliation only came at the very end of his life.
Vieux Farka Toure: "Yes, I've had to be very patient, but I didn't want to force things. My father was a very understanding individual, and once he understood music was really the life path I wanted to follow, he backed down."

Some of the songs you recorded for your debut album, 'Vieux Farka Toure', were still done in collaboration with your father. Was he difficult to work with as a musician?
Vieux Farka Toure: "He understood the art of criticizing whenever it was required. That's not really a bad thing, because he who never gets criticized won't better his skills. In the end, only hard work pays."

You attended the Institut National des Arts in Bamako. Do you feel it to be important for a musician to get at least some academic schooling?
Vieux Farka Toure: "I'd even go as far as saying I think it's a necessity. Having the ability to combine theory and practice can only boost one's skills."

Someone who's supported you almost from the very beginning was Toumani Diabate.
Vieux Farka Toure: "Toumani has been like a second father, a musical mentor too. He taught me a lot, not only in music but also on life in general."

As instruments go, the guitar isn't authentically Malian, but if I say the Malians at the very least reinvented the instrument, am I exaggerating?
Vieux Farka Toure: "(laughs) Just a little maybe, but I can't deny we have our own unique style of playing it; just like the American bluesmen have developed theirs. The Malian style of guitar playing really evolved from the way the traditional ngoni is played."

In the West that guitar sound is often referred to as the Mali blues. Is that a term you're happy with?
Vieux Farka Toure: "I do believe the blues has its roots in Africa and in consequence naming our sound the Mali blues, the African blues, describes it very well."

Apart from your father, who else would you cite as your musical influences?
Vieux Farka Toure: "Oh, there are quite a lot... There's John Lee Hooker of course and the other great American guitar players, people like B. B. King or even rhythm & blues artists like Ray Charles."

It might surprise some people to hear you didn't really start out as a guitarist but as a drummer.
Vieux Farka Toure: "(laughs) Yeah, I still play percussion once every so often."

I want to end the interview by confronting you with some words. You can just respond by explaining what they mean to you. The first one: Africa?
Vieux Farka Toure: "Africa is home; it's the place where I was born and where I grew up. Having said that, I would like to add a musician does not really have a home; wherever you play, you have to try to bring that feeling of home along."

Your hometown, Niafunke?
Vieux Farka Toure: "Niafunke is at the core of everything I do. Whatever I might try, if it does not work in Niafunke, it will not work anywhere else either."