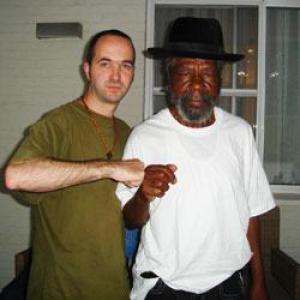 U Roy, how and when did the whole Sturgav story start?
U Roy: "I used to have a little joint in Southfield, Saint Elizabeth, a little bar, but after a few years I realized I didn't want to spend the rest of my life serving drinks. I already played a small sound system in those days and I decided to focus all my energy in running that. Now, I have two sons, one named Gavin and the other named Sturdock ((U Roy repeated the same trick to find names for his two labels Mego-Ann and Del-Ma: for the first he used letters from the names of two of his daughters, for the second those of the names of two of his baby mothers, red.), so I took three letters of each and came up with the name Sturgav. I more or less grew up in the sound system business. The first sound I used to play with, was Dr. Dickies (later known as Dickies Dynamic, red.), followed by Sir George the Atomic, eventually to end up with King Tubby's. I still consider the time I spent with King Tubby's as the best part of my career, because that was the period when people started to give me recognition and it was also the time when I did my first recordings. To me the soundsystem represents 99,9 % of my life; it's what I know best, my God-given talent if you want and my purpose in life."

How did Sturgav evolve into the legendary sound it is today?
U Roy: "Sturgav really became most famous when Charlie Chaplin and Josey Wales joined up. Those two formed what I consider to be the greatest deejay combination the island has ever seen. I don't know if they even realize that themselves. Back in the day people came from miles to see them perform."

Did you set out from the very beginning to make Sturgav a conscious sound?
U Roy: "Yeah man! When we started out we still played the odd rude boy tune because that was just what was happening then, but when Rastafarianism came on the scene it made us look at things on a more conscious level. A lot of people still looked down on Rasta's in those days and some still do today, but I give praises to His Imperial Majesty Haile Selassie I of Ethiopia, who lived in a palace and was one of the best dressed people in the world! That's why I always respected a certain dress code. Apart from that it was also a way to differentiate ourselves from other sound systems. From the very beginning Sturgav was known as a rub-a-dub soundsystem and we've never changed our style to suit fashion, even at times when our popularity was declining."

What makes doing a set with Sturgav different from your other shows?
U Roy: "When I'm performing with Sturgav, I wouldn't feel comfortable without Charlie, Josey or any of these guys around me. I'm an old man now and they still know how to mash up the dancehall. They might say they look up to me, but I can tell you I've been following their careers for years as well. Whenever someone is talking consciousness, I'm interested and these guys talk pure consciousness. We play the kind of music you can even listen to in front of your mother without being ashamed!"