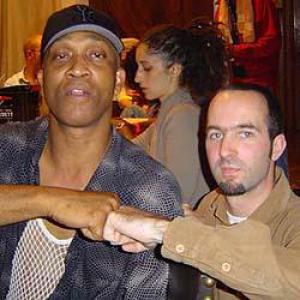 U Brown is a pupil from the school of U Roy, who maybe never got the attention he deserved. He virtually disappeared from the scene during the latter part of the eighties but was put back into the spotlight by the UK Blood & Fire label when they re-released his album 'Train To Zion'.

U, big respect! Welcome to Belgium. I hope you liked the vibes here at Hove Live?
U Brown: "To be honest I enjoyed it a lot. It never has to be extra big for me to enjoy it. In Jamaica we say: "Good things come in small packages!" The people were great and energetic. I only wish I could have continued a bit longer, but the show was running late. I gave what I had to give but there's more, hopefully for a next time!"

Did you want to pursue a career in music from an early age?
U Brown: "No, it never entered my mind! In those days when I started, if you were a singer like Alton Ellis, Delroy Wilson or John Holt, you could think of making a career of it, but as a deejay chanting over the rhythm tracks of a sound system, it was not that easy. I just did it because I loved doing it and it was a way to show people what I had in me. When I noticed reggae started to grow in popularity worldwide and I was asked to do some recordings, I started to take it a bit more serious."

As a deejay a lot of the time you have to voice over existing tracks from other artists. That's how the business started really.
U Brown: "Yeah, that's how it started, but nowadays it's not so much the case anymore. You just go into a studio and voice over your own rhythm tracks now."

When you do sing over an existing tune, can you do it over just about any song or do you look for singers or songs that suit your vocal style?
U Brown: "Well to be honest, it depends on the deejay. Back in the days, if you were a deejay that was in high demand, like U Roy, Big Youth or Dennis Alcapone, you had more or less free choice in the tunes that you wanted to do, but if you were just starting out, trying to build up your name, you were glad for the chance you were given. You just tried to get on whatever riddim they played for you, because once you could get on that riddim, a producer might hear you and want to record you."

Your main influence, your teacher let's say, was of course U Roy, but why U Roy? You might just as well have chosen Big Youth or Alcapone.
U Brown: "All of them gave me inspiration, but the first one was U Roy and the simple reason for that is that he lived in the same community where I was living. King Tubby's sound system was close to my house as well, about a 10 to 15 minute walk, so there were a lot of dances held in my area. I used to sneak out of the house and go and stand at the entrance and listen because I didn't have any money to get in."

One of your biggest and most well-known tracks is 'Weather Balloon'.
U Brown: "Most definitely!"

It's a bit of a strange topic to write a song about. What is that tune all about?
U Brown: "Well, a weather balloon is what it is, a balloon they let up to take measurements to predict the weather, but what I'm saying in the song is that no matter what weather it is this weather balloon will get through."

Tonight you were on stage backed by a full live band, but as a deejay often enough you just sing over a soundsystem as well. Which of the two do you prefer?
U Brown: "I like doing both things. They both give me a different type of inspiration. With a sound system you are closer to the people. In Jamaica a sound system is not put on a stage so the people just come and dance around it. A concert with a live band is more complicated technically, it's easier to mess up and with the big crowds you really need a stage for everybody to be able to see something. But both of them are music and that's what I'm all about."

You are known as being strongly against everything gun- or violence-related on stage. If we look at reality, the situation in Jamaica never seems to have been worse. This year over 1000 people were already killed in gun-related incidents. Where do you see that heading?
U Brown: "I'll tell you the truth! It's not only getting worse in Jamaica, it's a worldwide phenomenon and that is simply because the powers that be and the media keep promoting this kind of music. I love sex very very much; but there's a time and place for everything. Nowadays people just don't seem to focus on anything but sex and violence. A gun doesn't do anything good for you and sex is nice, but if you don't do it in an appropriate way it's going to leave you hurt as well. The gun thing definitely is a big no no no for me! There's too much of that. Kids don't make guns, so how do they get them then? There are big people behind that, who are bringing the guns into the country, but now the situation has escalated and it's beyond their control. Music is powerful; the power of word and sound is a mighty thing, so when you are communicating something in a song, you always have to be careful what you are putting out there because what goes around comes around. A lot of artists that sung songs about violence and guns ended up getting killed by the same guns they were singing about. There's no goodness in it!"

All right U, great message there, respect for that!
U Brown: "Bless up, respect to you too! Keep it burning!"