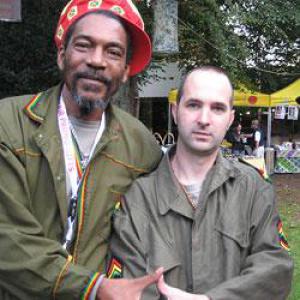 Tuff Lion, I know you as a guitar player, but these days you're not shy to take the mic either.
Tuff Lion: "Well, I still primarily think of myself as a musician. I've done some vocal work in the past but never as a lead vocalist, so that's definitely a new development in my musical career. I guess I'm just trying to find ways to reach as many people as possible with my music."

When and where did your musical story start?
Tuff Lion: "I discovered music at a very early age and taught myself to play the guitar by following a kind of mail correspondence course. Later on other instruments followed and I also learned the workings of the whole recording process. I've given myself completely to the service of His Majesty through the work of music."

Did you focus on reggae music from the very beginning?
Tuff Lion: "Not really, I started out listening to and playing blues music, but I've been focusing on reggae for over thirty years now. They say a man who wears one watch always knows what time it is, when a men who wears two watches is never really sure. I love music, but the one thing I'm sure of is reggae; that is the one watch I've chosen to wear. Music is music, but when you realise the potential and the power of reggae music, you will realise that this is a music that carries a message directed at the entire world."

When one mentions Jamaica, people immediately think of reggae music. This is less true for the Virgin Islands. We're only just starting to discover artists like Midnite, Dezree and yourself of course. How important is reggae in the Virgin Islands?
Tuff Lion: "In the US Virgin Islands you've primarily got folk music called quelbe (a form of topical folk song, quelbe is commonly performed by scratch bands which use improvised instruments like gourds and washboards, though their folk origin lies in individuals, who sang the songs in informal settings, celebrations and festivals. These songs typically contained sexual innuendos and double entendres, as well as other hidden meanings, red.) and apart from that calypso and soca are still dominant. Youths listen to a lot of hip hop and R&B like in the rest of the United States. The voice of the people is still expressed through reggae music though. Reggae music has something that really transcends all boundaries. You can easily sell out a dancehall show in the Virgin Islands, but the voices coming from the islands are definitely Rasta and roots-oriented."

The reggae music coming from the Virgin Islands is also a lot less in-your-face as its Jamaican counterpart.
Tuff Lion: "I think that has a lot to do with the temperament of the people. Virgin Islanders are cool and laidback. We don't believe in ramming things down your throat and we don't like sloganesque propaganda. You can bring about change by speaking in a very simple way. I also think the urgency of being heard does not come from poverty and desperation in the Virgin Islands like it does in Jamaica. It does exist and we have some fire chanters on the island as well, people like Volcano or Ambush, but still their style is different from what's coming out of Jamaica these days."

Have you ever been to Africa, and if not, is that still an aspiration?
Tuff Lion: "Well, I've had the opportunity to work with a Ghanaian artist called Osagyefo. Jah brought us together in 2006 and that collaboration gave me the certain knowledge that we are bridging the gaps and can unite all Africans under the banner of reggae music and, who knows, maybe one day the opportunity will come for me to play over there as well."

Compared to genres like hip hop or r&b, reggae has a hard time piercing the music market in the United States. Even the great Bob Marley never really succeeded there. Why do you think that is?
Tuff Lion: "Reggae just isn't considered to be an American product. That's a corporate point of view though, because on the ground the people are supporting reggae music. Without huge sale numbers and corporate sponsorship reggae is still holding its ground. Reggae is the music of the oppressed and the suffering; it's a voice of consciousness that certain elements in western society don't really want to be heard. Most Americans just don't travel enough, some have never been further south than Florida and that limits their world view. Freedom is only a word without freedom of movement. People need to travel and see and experience the world for themselves. That's the only way to fully comprehend what a marvellous place it is."