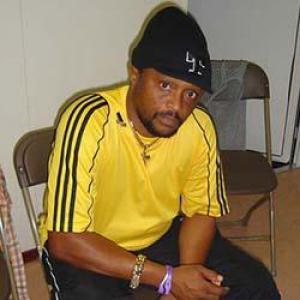 Triston, the first song you ever recorded was a tune entitled 'Love Is A Message' which you voiced at Bunny Lee's studio. Apparently you started at a very early age. How old were you exactly when you did that tune?
Triston Palmer: "Eight years old!"

How does an eight year old boy get into a studio with Bunny Lee?
Triston Palmer: "Well Bunny Lee heard about me and came to check me out. I think he knew one of my aunts at that time and she spread the word that he wanted to get me into the studio."

A lot of your major hits you did together with Jah Thomas. How did you meet him?
Triston Palmer: "In a similar way really; I did a tune called 'A Class Girl' that did very well in England and then Jah Thomas approached me and we went into business together."

You are quoted as having said the only thing you ever did in your life is music.
Triston Palmer: "Yes, that's right!"

Was that hard at times, making a living of music?
Triston Palmer: "No, not really. I've dedicated my life to music. That's also why I built my own studio, Star Creation music."

Your biggest tune to date is still 'Entertainment'. How did that song come about?
Triston Palmer: "It started with an incident at a dancehall where some men started to fight over a woman and ended up mashing the dance. Jah Thomas came up with the idea and, working on it together, we created a hit."

We can't leave out talking about your collaboration with Linval Thompson...
Triston Palmer: "(laughs) Well, Linval has become like a brother you know. He came into my life, guided me and showed me a lot of things. I respect him a lot for that."

You just told me you started your career at a very young age, but at which stage of your life did Rastafari enter into the story?
Triston Palmer: "When I was still a youth, my father already liked Rastafari, so I guess you could say it was an inborn thing. Furthermore I used to hang around a lot with bands like Soul Syndicate where you used to see people like Dennis Brown and Big Youth. I really learned the ways of Rastafari from them."

To end this interview I would like to give you some names and you can just respond by explaining what they mean to you. Let's start with what you regard as the most important thing in your life: music?
Triston Palmer: "Well the most important thing in my life is really praising the Most High, because without him I wouldn't be here! When I talk about music, I talk about myself, because I eat, breathe and sleep music. Triston Palmer is all about music! The Most High gave me that strength."

Jamaica?
Triston Palmer: I love my country! Jamaica is a good place. There are certain little things, but Jamaica is the best."

In conclusion: His Imperial Majesty?
Triston Palmer: "I'm alive for the Most High! I'm a straight up Rastafarian, there's nothing better. Jah Bless! Selassie I!"