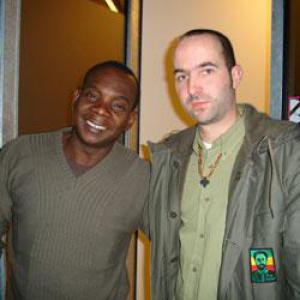 The kora, the twenty-one-snared traditional Malian harp, is an almost mystical instrument and no one plays it with more virtuosity than Toumani Diabate. He already received a well-deserved Grammy for his work and did some noticeable collaborations with the likes of blues legend Taj Mahal and pop nymph Björk. A conversation with an artist of his caliber can never be a dull one, but please be your own judge.

Toumani, first and foremost, welcome in Turnhout.
Toumani Diabate: "Thanks. I'm very glad and proud to be here because Belgium is a great country with a lot of history. You've got different communities living together here, the Walloons and the Flemings, just like we do in Mali. The only difference is that in my country there are a lot more; you've got the Bambara, the Mande, the Bobo, the Peul, the Songhai, and so on. I'm also very happy to be back in the country where my career started all those years ago. I started touring and performing back in 1988 and I had a Flemish manager, Tony Van Der Eecken. I owe him a lot!"

Can you tell us a little bit more about your instrument, the kora? When exactly did that instrument make its entry in Mali's musical history?
Toumani Diabate: "The kora is a Mandinka harp that, together with the balafon and the ngoni, the traditional Malian guitar, made its entry in the Manding empire somewhere in the 13th century. It's been around for about seven hundred years! Back then Mali had no written history, books simply did not exist. The Manding empire was much larger than Mali is today; it covered the whole area that is now divided between countries like Senegal, Gambia, Guinea-Bissau, Guinea-Conakry, Burkina Faso, Mali, Ivory Coast, Niger, Mauritania and parts of Nigeria. Sadly, the whole empire was dissolved and split up under colonial rule. The griot caste - of which I'm also a member - represented the living historical memory of the Manding empire. This history was passed on orally from father to son. The griots composed songs that described great victories or accomplishments of the king and his noblemen."

We know Toumani Diabate as the king of the kora, but your father also held that title. What can you tell us about him?
Toumani Diabate: "My father, El Hadj Sidiki Diabate - God bless him - was the king of the kora. He was awarded this title in 1977 at FESTAC (African Festival of Arts and Culture, red.) in Lagos. He developed a technique that allows the player to play the bass line, the accompaniment and improvisation at the same time, something that is now known as simultaneous playing. He was a great master. I represent the 71st generation of kora players in my family, a tradition that was passed on from father to son without interruption. My father was also among the founders of the Ensemble Instrumentale du Mali, just after Mali declared its independence in 1959 and he was a musician in the Mouvement de Résistence Culturelle Contre la Colonisation in the forties and fifties. With Batourou Sekou Kouyate he recorded an album ('Ancient Strings', red.) that no one has been able to copy until this day. The whole album was recorded in one day without rehearsing."

A whole new generation of kora players are already making their mark now; people like Ba Cissoko for example, who plays his kora as if it were an electrical guitar. Do you like these evolutions or do you prefer to keep things on a more traditional level?
Toumani Diabate: "I'm very happy about it, because these guys are like family. Ba Cissoko, Ballake Cissoko, Mamadou Diabate... I like their style, because what you hear is still the kora. All these artists did is taking their individual route, but in the end their paths converge. Personally, I've chosen to stay on a more traditional course, playing acoustically but mixing in lots of foreign influences. I already did collaborations with people like Taj Mahal or Ketama, a Spanish flamenco band, and most recently I've worked with Björk. Twenty years ago my great brother Mory Kante shook the world with 'Yeke Yeke', a song in which he combined the sound of the kora with that of western instruments. The world is constantly evolving and one has to try and evolve with it."

What do you look for when doing a collaboration?
Toumani Diabate: "I always look for some kind of exchange. In every collaboration I've done so far, I always gave a little something of myself and got something else in return; call it a cultural exchange if you want. I never play their music, though. When I worked with Ketama, I did not play flamenco; I played Mandinka music and made the two genres interact."

You also teach at the Conservatoire des Arts et Multimédias in Bamako. I can imagine learning to play an instrument like the kora takes time and effort. Are today's youth still motivated enough to do that?
Toumani Diabate: "Of course! It's like most other things. A great step forward has been the decision to teach kora-playing on an academic level. The instrument in a way represents our culture and tradition. It's really like learning to play the guitar: if you want to learn, you can, but above all you have to love your instrument."

Continuing on a completely different note, all countries surrounding Mali have had their share of civil war, famine and other misfortunes. What is the secret that has shielded Mali from suffering a similar faith?
Toumani Diabate: "God! We have to praise God and God is peace. The wars in Africa are often commandeered and the instigators are not to be found in Africa but over here (in the West, red.). Ali Farka Toure once said that instead of selling us weapons, they should be selling us hoes, axes and plows, so that we can cultivate our land. Unfortunately it's still the weapon dealers that are doing the most business in Africa. Our continent was and continuous to be pillaged. Today we see Africans willing to try their luck in the West, being sent back. Human rights don't seem to exist for the African. That's a very sad fact, but I thank God every day for bestowing peace on Mali. I wish this peace to the whole of Africa and even the world in its entirety. The key to reaching such peace is love and understanding."

I would like to end the interview by giving you some names. Just tell us what they mean to you. Let's start with: Soundiata Keita?
Toumani Diabate: "Soundiata Keita was the king of the Manding Empire. He unified the empire and dictated the first constitution. That means that Mali has already been a democracy for over seven hundred years!"

Ali Farka Toure?
Toumani Diabate: "Ali Farka Toure - God have mercy on his soul - is the lion of the desert; the man who showed the world the true roots of the blues. Apart from his musical skills he was also a great and strong man. When you met Ali for the first time, he would immediately make you feel like you'd already known each other for years. He was a wise and glorious man too, and to me personally he was a brother and a great musical master."

Toumani, thanks a lot!
Toumani Diabate: "(in Dutch) Dankuwel! (laughs)"