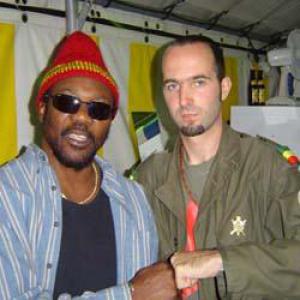 Crowning a career spanning over 30 years, in 2005 Toots Hibbert was awarded a Grammy for his latest album 'True Love'. We found the Jamaican superstar relaxing backstage after his performance at the Reggae Sundance festival and talked to him about reggae, soul and the importance of awards.

Toots, you're the man that introduced the world to the word "reggae" with your song 'Do The Reggay'.
Toots Hibbert: "Yes, that's true. Before that tune the music really didn't have a name. That word just came to me; I never planned it or anything. I was just writing a song. In Jamaica there was a slang word we used, "streggae", to describe someone who wasn't dressed too nicely, but I'm still doubtful if there's a connection."

You're also known as the man that fused reggae and soul. Was that something you set out to do or simply an evolution in your music?
Toots Hibbert: "That's my talent. My voice is very flexible, so I can do almost anything I want with it. I can do country and I started out doing gospel. Music is in me and I deliver it from a lot of different angles! I'm an R&B singer, I'm a reggae singer, I'm a gospel singer, and I'm a country singer..."

Let's talk a bit about that country part then. On your last album, 'True Love', you do a lot of duets and some of them are with well-known country artists like Willie Nelson and Bonnie Riatt. Did you choose to do these duets with them yourself and do you listen to their music?
Toots Hibbert: "Yeah! I chose them because they are my fans and I am theirs. Everybody, like my manager and V2 records, was very excited to do it, and in the end the album won a Grammy!"

Tell us what that felt like. After all these years you finally got rewarded with a Grammy.
Toots Hibbert: "It felt like nothing! It's just another thing. I had a lot of number one records in Jamaica and even in the rest of the world, from the time when I was only 15 or 16 years old. For them to recognize me only now is a shame, so I didn't boast about it. It's good to receive, to show people I'm worth more, but I don't worry about these kinds of things. My real reward is God. An award is no reward, God is! He allows you to clear your spirit, clear up your mind and do good; that is much better than a Grammy. A Grammy is nice to put on a shelf so you can show it to your grandchildren, but I don't like to boast. You won't hear me say: "Hey look at that! Only I could get that!". It's just what it is."

We also have to talk about that other big hit '54-46 That's My Number'.
Toots Hibbert: "We shouldn't really have to do that!"

Well, could you tell the story behind it one more time, for those that haven't heard it yet?
Toots Hibbert: "It's the last time I'm going to tell it then, because it's not a good thing to talk about people who do bad things. There were some people who were jealous about the way I was coming up in ska music, about the way my career was going. They tried to frame me for possession of ganja, when I wasn't even smoking yet at that time! So I wrote a song about it, also to let people know I could write songs. I sung about it to let people know how innocent I was (starts singing): "Do you believe I would take sensi with me and give it to the policemen? I wouldn't do that! No, no, no, I wouldn't do that! And if I did that I would say so! ...". That became a hit all over the world."

Alright Toots, I want to thank you for taking out the time to do this.
Toots Hibbert: "Yeah man! It's a pleasure to do this for you because you're a cool guy."