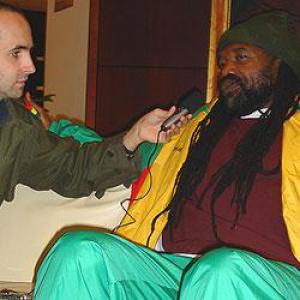 Tony, as an artist you use the name 'Tony Rebel'. What does the ‘Rebel' part of that name stand for, what does it represent?
Tony Rebel: "'Rebel' represents a kind of iconoclastic personality, the kind of person that tears down things that are negative. When you have a rebellious personality, you'll disagree with certain things and you will try to change them. When you look in the dictionary, you'll find a rebel is someone who fights against the government even by violating the law, but I'm a positive rebel. I see myself more as the guerrilla type, fighting for freedom, equal rights and against things that are bad for the family of humanity in general. My actual name is Patrick George Anthony Barrett. They used to call me Anthony which got shortened to Tony."

Your biography states you didn't grow up with your parents, but were raised by your grandmother. Did that mean you had to become independent from a very young age?
Tony Rebel: "Very much so! You got it totally right. My mother died when I was four years old. She was only twenty-one  herself and already had me when she was still a teenager. I didn't know my father and grew up with my grandparents. But again I lost my grandmother when I was only twelve, so I needed to have a sense of responsibility from an early age. When all of my friends could turn to their mother for support or solace, I had to turn to myself. But it was by turning inward, that I discovered the divine power that was within me. I became a very spiritual person from that young age. It is still the foundation for most of the things I do today."

At which stage did you become convinced then of the fact that music would be your future?
Tony Rebel: "Well, I can remember that around the age of twelve to fourteen I already liked music a lot. We used to have some comics in Jamaica that we as kids used to read, things like "The Rawhide Kid" and so on, and in the back of these would be a coupon to enter a song writing competition. Some of my cousins used to participate and I really wanted to too, but I couldn't write a song. What I did used to do was imitations of certain artists. It was just for a laugh, but I got told by my friends and classmates anyway that I was really musically inclined. I then combined their encouragement with my love for music and decided to give it a go. I certainly wasn't the only one trying, but apparently I was better at it than most, and looking back on it now it seems to me as if it was a divine mandate that was given to me. I was really born to do this."

Talking about the divine or the spiritual, when did Rastafari find you? I don't want to ask you when you became a Rastafarian, because I know from experience most Rastafarians will reply: "You are a Rasta from birth!"...
Tony Rebel: "Well, maybe I'll give you a different answer... I discovered I wanted to be a Rastafarian when I was in my early teens and still going to school. A teacher asked us to write a descriptive note on a person. About six people in my class took me as their subject and all of them described me as a Rasta. I didn't want to comb my hair during the holidays and I had an apparent interest in the Rastafarians I saw on the street. Around the age of 17 I decided to grow my locks and also went into the hills to acquire all the knowledge I could find."

You're very famous, both as an artist and as a festival organiser. Rebel Salute, a festival that grew out of your birthday celebrations, is now one of the most popular events on the island. Is the story completely correct? Was it a birthday party that swung out of control?
Tony Rebel: "(laughs) It's a birthday party that swung into control! It started in 1994 as a birthday celebration. My birthday is on the 15th of January and the first one was held on the 14th, so it went over into my birthday. Because I'm someone who doesn't eat meat, we didn't sell that on the festival. And the same was true for alcohol. If I wanted to celebrate my earthday, I wanted it to be fitting to my livity!"

Did that ital food part of the festival catch on with the public right away?
Tony Rebel: "No, at first people were very weary and said it couldn't happen. At the traditional festivals in Jamaica they sell curry goat and rice, jerk chicken and beer and so on. We wanted to do something different and that's also why I chose the name. Usually when people do something for their birthday, they call it a birthday bash. I decided I didn't want that, neither in name as in vibe or atmosphere. At first people just came out of curiosity, to see what it was like, but every time they came, they saw the production of the show improving and the quality of the entertainment was getting higher. Now it's just one of the great festivals on the island."

Now, so many editions later, almost every roots artist in Jamaica has been on the Rebel Salute stage. Is there still anyone or any group left that you would really like to play there?
Tony Rebel: "(laughs & thinks) Let me see... Well, ok, maybe Aswad, Steel Pulse and UB40."

I notice a UK connection there...
Tony Rebel: "Yeah, that's because everybody in Jamaica from Ziggy over Damian, Bunny Wailer, Burning Spear, Max Romeo to Jimmy Cliff, has already played at the festival."

Is there any performance that stuck in your heart?
Tony Rebel: "(determined) Yes! Jimmy Cliff! That was a wonderful show. Secondly there was Junior Byles. He hadn't performed for over 30 years!"

That was true magic, yes!
Tony Rebel: "Yeah! To get him off the streets and back on stage was wonderful. Jimmy Cliff on the other hand gave a performance of over 2 hours and he's over 60 years old now! He was still doing his dance moves like a 20-year-old and had the crowd eating out of his hands."

Getting back to your own music then; your last album 'Connection' already dates back to 2003...
Tony Rebel: "My second to last album now, because I just released a new album entitled 'I Rebel'. It's out on my own label called Flames Productions. I took two tracks of the ‘Connection' album and put them on this one as well, but all the rest are fresh new tunes. At the same time I also put out Queen Ifrica's first album called 'Fyah Muma'."

Let's return to the 'Connection' album. It was quite a good album, but distribution- and promotion-wise the album could have used some more attention. I know very few people who got a hold of it. What went wrong there?
Tony Rebel: "What happened is that the company who put it out, Next Music! in France, went into bankruptcy soon after its release, so that was the end of the pressing of the record right there."

So, it's kind of a collectable now?
Tony Rebel: "(laughs) Yeah, something like that."

Then there is what has almost become your signature tune, 'If Jah'. I know it in three languages now; maybe there are even more versions, but what was your philosophy in doing that song in so many translations?
Tony Rebel: "The philosophy behind doing that is that I thought the words of that song were so powerful and spiritual that I wanted as many people as possible to hear it. It's all about the Supreme Being, who- or whatever you want to call him, guiding you. Most spiritual people believe that, but they all speak different languages. I wanted it to reach as wide an audience as possible and since Cuba is only 90 miles away from Jamaica I decided to do it in Spanish first. Then I came to France, to do the 'Connection' album and got encouraged to do a version in French which I subsequently added to the album. Just last night I was talking to someone in Germany and I told them that if they translate it in German, I will do a German version as well."

I often conclude my interviews by giving the interviewee some names. He or she can just respond by explaining what they mean to him or her.
Tony Rebel: "Ok, go ahead."

Let's start of with your home country, Jamaica?
Tony Rebel: "Jamaica means home. It's the place where I draw my inspiration from. My family is there. A small island in the Caribbean that is a small version of what Africa should be in terms of the energy and vibes stemming from the rebellion and emancipation of the slaves. It has put the Caribbean on the map, not through its geographical size but through the size of its culture and the attitude of the people."

A logical next one then: Africa?
Tony Rebel: "Africa is grandmother. Jamaica is the mother and Africa is the grandma. The people of Jamaica come from Africa and you have to look to your ancestors for guidance, teaching and so on. There's a saying that even when you put a sheep into a cow pen it will still give birth to a lamb not a calf! That means that our African roots are still within us. You can't take that out of the Jamaicans. We are proud of our African heritage, but at the same time we realise that economically and politically there's still a lot of work to be done."

In conclusion then: Tony Rebel?
Tony Rebel: "(laughs loudly) Tony Rebel: 6 feet 4 inches, 220 pounds. Born in Manchester, Jamaica, but came to Kingston to struggle in music and is now just going around preaching and giving peace, love and unity through music to the family of humanity!"