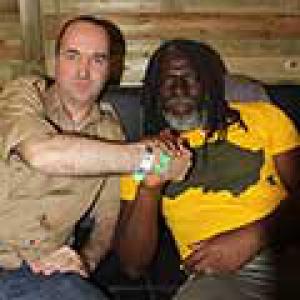 Tiken after the release of 'African Revolution' in 2010, you took some time out to involve yourself in a project in Africa.
Tiken Jah Fakoly: "Yes, I wanted to show the African youths over there that there's still a lot of value in tilling the soil. You have to realize that most of the youngsters in Africa have left their native villages to try their luck in the big cities and those living there are already contemplating migrating to Europe. Agriculture is vital in the survival of the human species as it's thanks to the efforts of the farmers everywhere that city dwellers all over the world are able to feed themselves. I used my profile as an artist to draw attention to the issue at hand; if these youths see that a "big star" like Tiken Jah Fakoly isn't afraid to get his hands dirty, they might start to question their goals and values."

Following a series of albums focusing on your African heritage, for 'Racines' you once again travelled to Jamaica.
Tiken Jah Fakoly: "True, with this album I wanted to pay homage to the golden era of reggae music by reinterpreting a series of hits from artists like Peter Tosh, Max Romeo, Ken Boothe et bien sûr Bob Marley. At the same time I wanted to prove once and for all that reggae has its roots in Africa. If one can add a few lines of ngoni or kora to a song like 'Get Up Stand Up' without much effort, that means that even if the reggae genre was invented in Jamaica, its roots are African!"

One by one all the "greats" in reggae music are slowly disappearing. Did that fact influence your decision in wanting to record this album in any way?
Tiken Jah Fakoly: "I believe we should at least make an effort to keep their work from slipping into oblivion. Personally I try to do that by not simply covering these songs, but by adding a fresh African touch. After all, it's thanks to these greats that reggae is a worldwide phenomenon today, so we have to pay them homage!"

Did you just select a series of well-known tunes, or is there actually a deeper level to the tracks on 'Racines'?
Tiken Jah Fakoly: "In fact I tried to select tracks that had some significance, like Ken Boothe's 'Is It Because I'm Black', a song that was originally released in the era of the Civil Rights Movement in the US and talks about the racism and discrimination blacks were faced with on a daily basis back then. Unfortunately recent events in the US have proven the song is still as relevant today as it was back then. Another example is Bob Marley's 'Get Up Stand Up', which Amnesty International turned into a human rights anthem. They're all songs that were recorded several decades ago, but haven't lost their appeal."

In Jamaica you once again joined forces with Sly & Robbie.
Tiken Jah Fakoly: "Yeah, but even though I'd already worked with them on 'Françafrique' and 'Coup De Geule', joining forces to rerecord these iconic tunes was completely different as most of them had also been present when the original versions of the songs were recorded all those years ago! Most of them hadn't played these tunes in a studio setting since, so that definitely stirred some emotions."