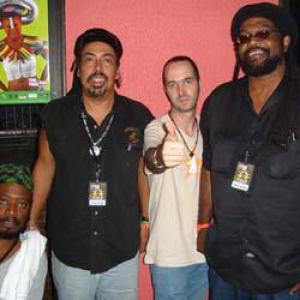 You got your education, for a part at least, at the Jamaica School of Music. If I'm correct there are two institutions in Jamaica where you can learn to play music, being the Jamaica School of Music and the Alpha Boys School. What would you say is the main difference between the two?
Cat Coore: "I would say that Alpha Boys School tends to deal more with children at a secondary school level that want to learn music or with special cases like children with bad behaviour and so on. Plenty of good musicians came out of Alpha though, famous ones like Don Drummond and Jackie Mittoo to name but two. Jamaica School of Music is an institute that is solely devoted to teaching music (be it on a more traditional and classical level, red.). Both are very good institutions and have turned out tremendous musicians. My personal music teacher was Miss Noel Foster Davis. She had her own school and played a big part in Jamaican musical history to."

As a twelve year old, you already played with Inner Circle. The line-up of that band changed a lot over the years; Bunny (Rugs, red.) was also a part of it at one stage. Were you still in the band when Jacob Miller was part of it?
Cat Coore: "No, I didn't play with Jacob, but I knew him very well. When Jacob joined Inner Circle, Third World just had a big hit with 'Now That We Found Love'. They had just signed with Island records as we did, so we were all very close. Even though we're kind of competing now, because we're both bands that want to do well, we're still very close friends."

What set Third World apart from all other bands in Jamaica, was that unique blend of musical styles ranging from reggae over soul into African music. Was that something you envisaged from the start?
Cat Coore: "No, it was a natural thing. Not a lot of people realise it, but when you read some books on reggae or on Bob Marley, you will find that reggae was very much influenced by rhythm & blues. Curtis Mayfield and Sly & The Family Stone had a big influence, James Brown, Marvin Gaye and famous groups like The Delphonics, The Manhattans and so on. They are the ones that we copied in the early days."

Who came up with the name?
Cat Coore: "A friend of ours, Clancy Eccles (singer and producer, red.), came up with that name. He recently passed away."

Your most recent album 'Black, Gold & Green' was a dedication to the place you all come from, being Jamaica. Why did you choose to do that album at this time?
Cat Coore: "The main reason for doing that was that we were invited to go home and play for the athletes who had just won a lot of medals at the Olympics (the 2004 Games in Athens, Greece, red.). The girls did very well, the men did very well, and we had a triple jumper medallist in there, a hurdler... Jamaica really got a tremendous result at the last Olympic Games and we wanted to pay tribute to the greatness coming from this small island, so that's what we did."

You got your first record deal from Chris Blackwell, who subsequently sent you on tour along with Bob Marley. How do you remember Bob?
Cat Coore: "Answering that question could turn into a whole book. Bob has been dead now for 30 odd years and the more Jah allows me to live, is the more I learn and remember about him. When you read about a person, listen to his music and combine that with having known him in person, you're really able to form an image of the spirituality of that person, more than the physical aspect of his life. I remember Bob as a great brethren, like an older brother to me and a very fine human being in his own right. I'm not even talking about his talent as a singer and a musician, because he was a champion for black people in that aspect, but he was a fine, good man to!"

In the beginning of the eighties, you did a movie called "Prisoner In The Streets" (1980, directed by Jérôme Laperrousaz, red.), the soundtrack of which is still one of my favourite live albums in reggae music, but just recently you worked with the same director again.
Cat Coore: "Oh you mean Jérôme?"

Right!
Cat Coore: "It's a brilliant project (called "Made In Jamaica", red.), you will definitely like it. What he did is he came to Jamaica and made all the artists play live."

The song that still gets the most response in my opinion is '96 Degrees In The Shade'...
Cat Coore: "Yes, I agree."

On the album by the same title, the song has a different title, namely '1865'. Could you shortly explain why that is?
Cat Coore: "Yes, the song itself was telling the story that happened in 1865, of a giant in black history, called Paul Bogle, who opposed English colonial oppression. So the song goes: "96 degrees in the shade, 10.000 soldiers on parade, taking I&I to meet a big fat boy...". What it's saying right there is that Paul Bogle was a rebel. The "10.000 soldiers" represent the system of Babylon. That's the whole vision that's portrayed in that song. The "..., taking I&I to meet a big fat boy" is like when black people were arrested and held prisoner by the Babylonian system. We're trying to show that the fact that Paul Bogle was hung has relevance to all things that are going on around us today. Some will suffer, some will burn, one day people might learn! Respect!"