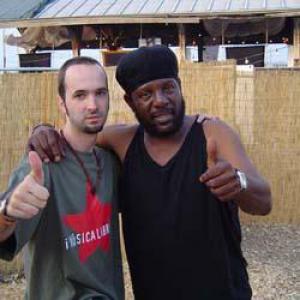 If the name Bunny Rugs doesn't immediately ring a bell, Third World definitely should. Bunny Rugs is the superb voice of this legendary band and for some years now also has been working on a solo career. We caught up with him at the Couleur Café festival where he performed with what he considers to be his new family: Sly & Robbie and The Taxi Gang.

Bunny, it's the second year that I see you on the road with Sly & Robbie. Are you going to continue that in the near future or are you teaming up with Third World again?
Bunny Rugs: "I'm very fortunate and I give thanks to be able to do what I do. I have found a new family in Sly & Robbie and the Taxi Gang. I still have my old family in Third World. They just did a tour in Australia and we just finished a new album called 'Black, Gold And Green', which are the colours of the Jamaican flag. We might be going on tour in Europe next year, but we're not sure yet. So I'm still with Third World, yes, but I really enjoy the opportunity to play with what I consider to be Jamaica's best: Sly & Robbie. They are responsible for carving out the Jamaican sound and have had hit songs with just about every artist you can think of. I am convinced that Sly & Robbie have recorded up to a million songs! (laughs) In any case it can be no less than 600.000. I like performing with them; it's a different form of expression. Everybody's happy, we enjoy ourselves when we're on stage and the audience appreciates it because they don't often get the chance to hear dub music being played in that manner: very aggressive, no thrills, no frills, just instruments and heart!"

From the beginning Third World didn't stick to just playing reggae, but instead went totally crossover.
Bunny Rugs: "You have to try and reach as many people you can! You have to try to touch their hearts by trying to experiment with colours, shapes and sizes, and that's what we tried to do with Third World. In the beginning we were criticized for going that way, but eventually everybody saw what we were trying to do and really appreciated it. It wasn't a deliberate thing though. With the talent of the musicians in Third World, like Steven 'Cat' Coore on guitar and harmonies, Michael 'Ibo' Cooper on the keyboards, Richard Daley on bass and, you couldn't help but getting that sound!"

On the '96° In The Shade' album, Third World's hit song '96 Degrees In The Shade' has a different title, just the year number '1865'. Could you explain what that year stands for?
Bunny Rugs: "'96 Degrees In The Shade' has two titles. In the year 1865, Paul Bogle was hung by the British and that is what the song is all about. It was 96° in the shade in the year 1865 when Paul Bogle was executed. Let me explain who he was. Paul Bogle was one of Jamaica's first heroes, a man who stood up for his people. He rebelled against the English and belongs in that line where you'll also find Marcus Garvey and Bob Marley."

You were born as William Clark. What's the story behind your nickname 'Bunny Rugs'?
Bunny Rugs: "In Jamaica everybody has a nickname. My grandmother gave me the name 'Bunny' because she said I kept jumping around the house like a rabbit when I was little. A road crew member from Third World, called Dallas, gave me the name 'Rugs' because I love to sleep on the floor. If there's a rug on the floor, I put my mattress there and go to sleep. That is just the best place for me."

At the end of the nineteen eighties and during the nineteen nineties you did quite a number of duets with artists like Marcia Griffiths and Prezident Brown. Did you have a favourite amongst them, someone whom you loved to team up with?
Bunny Rugs: "No, not really. The last few years I've been trying to reach out and do as much collaborations as possible, like recently with Wayne Marshall, but I don't have any favourites. I like to work with all of them because every time it's a different way of expressing yourself. I like to experiment."

You are part of that tradition of great Jamaican singers, but nowadays singjays like Sizzla or Capleton seem to be more in the spotlights. What are your thoughts on that evolution?
Bunny Rugs: "I like it! I think real singers needn't be afraid. A lot of singers are a little afraid of this evolution, but I think the time for singers is coming again. We in Jamaica need to pay more attention to our heritage and to the formation of new talent. Chanting is the in-thing right now, but we, the older generation of singers, have to teach the youngsters."

I found the names of the first bands you played in, but to me, and probably a lot of people from my generation, those names don't really ring a bell. What kind of music did you play in those days?
Bunny Rugs: "Charlie Hackett & The Souvenirs was the first band I performed with. I'll give you a quick story of what happened: in Jamaica there's a road by the name of Maxfield Avenue and on that road there's a club with the name Kitty (Mack, red.). At that club Charlie Hackett & The Souvenirs were the resident band. I auditioned on a Wednesday, they liked me and I was on stage by Saturday. I was only sixteen years old at the time. Charlie Hackett lived behind where my house was, so I heard them rehearse a lot, but I didn't know it was them until I went to audition at the club. (laughs) I became their lead singer because the band leader, Charlie Hackett, played the sax himself. The transport of the band's instruments was done on a three-wheel-bicycle. Then I was with Inner Circle for a while. Michael Cooper, Cat Coore, William Stuart and I were original members of Inner Circle. I then left and went to New York where I ran into Hugh Hendrix & The Buccaneers. They played Top 40 cover songs. It was a dance band that played 3 or 4 sets a night. That experience is responsible for giving me the versatility to do different things. You had to sing 23 songs from different people, from Patti Labelle to The Drifters."

Recently a worldwide event in aid of Africa called Live 8 was held. It got some criticism as well though, because some people claimed far too few African artists were invited to participate. What is your opinion on that event?
Bunny Rugs: "I commend the people who made the effort to stage an event for that purpose, but we all know that most of the time such events are used for self-promotion. Everybody's on television worldwide with six million people watching. I think there should have been not only more African singers but artists from all over the world represented there. Sly & Robbie should have been there or Burning Spear. In Jamaica we sang about Nelson Mandela for years to ask for his release. We sing about Ethiopia, about the struggle in Zimbabwe and so on. We've been singing songs about Africa for years. There should have been a Jamaican contingent present there, together with artists from Brazil and Africa. I hope something comes of it and that the intentions were for real and Africa does benefit, because right now Africa needs some serious attention. If we fail in Africa, the entire world fails! Africa supplies the whole world with raw natural materials. Everything started in Africa; in the Bible, Genesis 2 v 13 refers to Ethiopia (And the name of the second river is Gihon: the same is it that compasseth the whole land of Ethiopia, red.). We know the truth!"

Any final words of goodbye for your European fans?
Bunny Rugs: "I would like to tell the people all over Europe that every Jamaican artist and entertainer loves them! They kept our music alive, promoted our artists and loved us, so we love them back. Each time we come we learn more, have fun and always hate to leave. Europe, reggae music says: "One love!"."