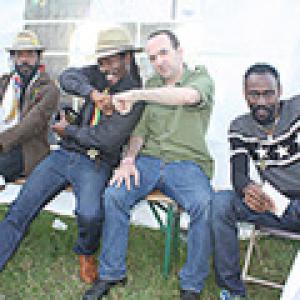 Kush, of course you're the sun of the legendary Winston McAnuff. How important would you say has your father been in your musical upbringing?
Rashaun 'Kush' McAnuff (drums & vocals): "Basically, everything I learned, he taught me. I grew up watching him rehearse and perform and I've come to regard him both as a father, a friend and a mentor."

I got to know you as the drummer for the Inna De Yard project.
Rashaun 'Kush' McAnuff: "I kind of regard The Uprising Roots Band as a progression of Inna De Yard as it was in Chinna's yard that the band got its name. The Inna De Yard project never really stopped as such, but when the Makasound label in France had to file for bankruptcy things kind of grinded to a halt."
Lloyd 'Akinsanya' Palmer (keyboard & dub poetry): "It was also in Chinna's yard that we first linked up, singing and jamming together."

Are you guys self-taught or did some of you get some schooling as musicians?
Lloyd 'Akinsanya' Palmer: "Most of us are self-taught, yes, but music is everywhere in Jamaica. Kush's story you know and as for me, like in so many Jamaican families my mother sang in church, as did my grandfather, so I guess you could say the musical gene ran in the family."

Lloyd you're the one flavoring the music of The Uprising Roots Band with dub poetry? As a poet, who would you say were your influences?
Lloyd 'Akinsanya' Palmer: "First and foremost the mother of Jamaican culture Miss Lou, but also people like Mutabaruka. I've been writing poems ever since I was still in high school. When I met Kush I decided to fuse my poetry with music and from that initial idea The Uprising Roots Band eventually developed."

Kush, similar question for you… In the world of drumming, who are the people you look up to?
Rashaun 'Kush' McAnuff: "Definitely the late Style Scott, but also Sly Dunbar, Carlton Barrett and Leroy 'Horsemouth' Wallace, a few of the heavyweights the island produced! (laughs)"

Ruel, how did you come by your Pot-A-Rice nickname?
Ruel 'Pot-A-Rice' Ashburn (bass): "I got that name when I was still at school. Some of my classmates started calling me 'Pot-A-Rice' and as so often happens, when they call you a name you don't like it usually sticks. In time I've come to embrace it though and I now found it makes an excellent stage name. I also partly used it to name my own label which is called Rice Field Productions. I've got my own home studio and with that label I want to help upcoming artists break into the music business."

Bopee, you're the veteran in the band. How did you get involved with these youngsters?
Winston 'Bopee' Bowen (guitar): "Well, I was already doing some stuff with Pot-A-Rice and at one stage he invited me to meet the rest of the band. I immediately liked what they were trying to do as they are all about roots and culture and that's me as well, so here I am! (laughs)"

Being the elder in the band, is it always easy to keep up with these guys?
Winston 'Bopee' Bowen: "Oh yeah, we kind of function like a family. I see myself as the elder of the band, steering them in the right direction where needed."

Is that also how you guys see Bopee?
Rashaun 'Kush' McAnuff: "To me Bopee is one of the godfathers of reggae music. He still toured with Dennis Brown back in the day and so many artists after that, so we can only be grateful he's willing to take out the time to play and tour with us. We love him like a bredda and a father!"

On 'Skyfiya" there were quite a number of references to the sun, was that the main inspiration for the album?
Rashaun 'Kush' McAnuff: "You know, we have a saying in Jamaica that goes: "Early to bed, early to rise, make a man healthy, wealthy and wise!", so when the sunlight would come over the mountain, the first thing it would see is The Uprising Roots Band there to greet it. The sun is the light of all ages which shines from the east, highlighting His Imperial Majesty Emperor Haile Selassie I, Jah Rastafari!"

Back in 2011 your headquarters and studio on Fairburn Road burnt to the ground. Have you guys meanwhile recovered from that setback?
Rashaun 'Kush' McAnuff: "We're slowly getting back on our feet. All the money we earn from touring is reinvested into rebuilding our headquarters and studio. After the fire we spent some time in tents and for the recording of 'Black To I Roots' we had to head to Tuff Gong instead, but I think we once again succeeded in producing a very strong album. Compared to our debut effort 'Skyfiya', we've grown as musicians and vocalists. As I said, we're slowly regaining our ground."