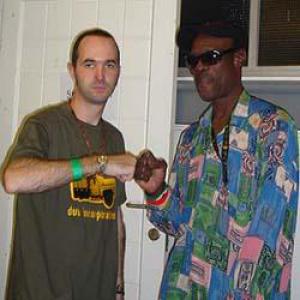 Vin Gordon: "My name is Vin Gordon also known as Don Drummond Junior. I was born in West Kingston and grew up in Alpha Boys School. I learned how to play the trombone and apparently sounded just like Don Drummond (trombonist with The Skatalites, red.). I started playing with The Skatalites at a street dance in Wellington Street. That must have been around 1964."

At Alpha, could you choose which instrument you wanted to play or were you instructed to play a certain instrument?
Vin Gordon: "Well actually at Alpha I played the blow bass and only after I had left school I picked up the trombone. I was playing the blow bass, but the popular bands didn't use that (the blow bass is only used in military or marching bands, red.) so I had to learn another instrument. As I just mentioned, I started playing with The Skatalites. Now, Roland Alphonso really liked me and he took me to Studio 1 and between 1966 and 1968 I played on legendary tunes like 'Satta Massa Gana', 'Real Rock' and so on."

How do you remember Coxsone?
Vin Gordon: "Coxsone was a good man... to me at least. People say he was a bad man, but he gave me a lot of encouragement. He didn't give me money, but he did encourage me. He bought me a trombone to give you an example. Without Coxsone, nobody would know Vin Gordon. (laughs) In the eighties I went to live in England for about eight years during which time I played together with Aswad. The instrumental on 'Warrior Charge' was really my arrangement. Then with Bob Marley I played together on 'Exodus'. It was cool you know, because I think once you play on something like that, people will always remember you. I've been playing for over 40 years now."

Apparently less and less young people in Jamaica are willing to go through the whole process of learning how to play an instrument.
Vin Gordon: "A lot of young people try it but leave it again after a while. Maybe they lack the patience. It takes at least 25 years to learn how to play an instrument in a decent way. You have to practise every single day if you are serious. I was fortunate I got the chance to learn it at Alpha Boys School."

Do you pass on your skills? Do you teach others how to play the trombone?
Vin Gordon: "Yes, I do a little teaching. One or two youths come to check me from time to time. My teacher was Lenny Hibbert (Leonard Aloysius Hibbert was a Jamaican musician who was bandmaster at the Alpha Cottage School and also a vibraphone virtuoso, red.)."

As you just mentioned, you've been playing for over 40 years now, so you must have seen a lot of musical styles come and go. What type of music do you prefer playing yourself?
Vin Gordon: "You know something... the trombone is such a funny instrument. You have to know how to play it. I think I like playing ska best. Ska gives you a lot of freedom. I used to tour with The Wailers Band, but it was much more monotonous than what I'm doing with The Skatalites now."

Ska is more versatile then?
Vin Gordon: "Yeah and jazz as well; it allows you to create your own sound."

When you've been playing as many years as you have, what keeps pushing you?
Vin Gordon: "When I was young, about 17 or 18 years old, I fell in love with this instrument and I've lived with that love, that passion ever since. You just live your music!"

Nice note to end on! I want to thank you for taking the time out to do this.
Vin Gordon: "Yeah man! Irie! Everybody bless up! Vin Gordon, one love!"