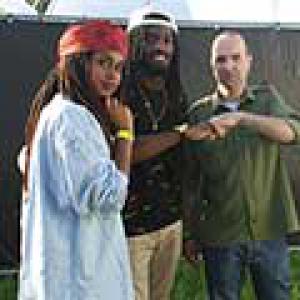 Quincy, Olivia, how exactly did The Dubbeez get started? Where did you all know each other from?
Quincy Fleur (vocals): "Before we started calling ourselves The Dubbeez, we were already performing together as Dub Factory. If my memory serves me right, that must have been somewhere around 2012. It all started when Olivia and her brother (Earl, drums, red.) felt like they wanted to start their own band. They went in search of musicians and vocalists to join them and the rest is history! The last one to join the band was singer Joanne. When we started out we were still experimenting a bit to find a sound of our own, but in 2013 we entered the Battle of the Bands. Winning that contest swung everything into higher gear."

Were you guys set on becoming a reggae band from the very start?
Quincy Fleur: "Absolutely, because most of us grew up listening to reggae…"
Olivia Davina (bass): "…especially Quincy, my brother and myself that is. Quincy is also my cousin, so with The Dubbeez we've got a bit of a family thing going. I play bass in the band and it were those great basslines you always hear in reggae music that first drew me to that instrument. For me there was no discussion; it had to be a reggae band! The only question that remained was how exactly we were going to sound, and that was also why, after a while, we felt we had to change the Dub Factory name into The Dubbeez. A name like Dub Factory, apart from being far from exclusive, kind of obligates you to play a lot of dub! (laughs)"

Quincy just mentioned you guys grew up listening to reggae, but given your Surinamese background, didn't genres like kaseko, winti or kawina play any role in your upbringing?
Olivia Davina: "No, I didn't grow up listening to that kind of music at all, so I have to admit I don't know all that much about it. But you can ask me all you want about reggae; that music is in my blood!"
Quincy Fleur: "My story is slightly different. As I often stayed over at Earl and Olivia's, I was exposed to reggae from an early age as well, but at home my parents mostly played kaseko and kaskawi. Like Olivia I quickly got a bad case of reggaemylitis though, and never looked back. Personally I mostly listen to raggamuffin; something I think is reflected in my live performances."

Am I right in assuming that for the majority of the lyrics of your songs so far you've drawn on your own experiences?
Quincy Fleur: "If with that question you're referring to the tracks on our debut EP, then yes, as with those songs we tried to give listeners the chance to get to know us a bit better."
Olivia Davina: "We tried to use well-known themes like alcohol abuse and put it in a different context; 'Hangover' tackles a subject you might rather expect in dancehall, but since we're definitely don't mind a good drink, why not be honest about it? With 'All I Can Do Was Cry', a song by Etta James, the EP also contains a cover version; the original is a soul tune, but we loved it and gave the song a ska-makeover."

Olivia, I probably won't have to tell you there's something sensual about a woman playing bass. How did you end up playing that instrument?
Olivia Davina: "Well, my father was a bass player as well. Together with my mom, he used to be in a reggae band. The bass is still the first thing I listen to when I hear a song. You can give me the title of just about any song out there and I'll hum you the bassline! (laughs) I still remember seeing my father perform at De Kade in Zaandam - I believe it was some sort of tribute to Bob Marley - and when the band started playing 'Zion Train', the bassline just blew me away. It was at that exact moment that I knew this was what I wanted to do as well."

Do you guys have any plans to record in Jamaica?
Quincy Fleur: "We travelled to Jamaica back in 2014. The plan was to stay for about a month and record our debut EP at one of the studio's over there. Unfortunately things didn't quite work out as planned, but we did meet a lot of local artists and producers and gained a lot of experience."
Olivia Davina: "At this moment we don't have any concrete plans to return to Jamaica. We've learned we might just as well record in Holland (none the less, in February of 2017, The Dubbeez boarded a plane bound for Jamaica, where at Anchor Studio they worked on their debut album, assisted by producers Stephen Stewart and Samuel Clayton Jr., red.)."

Do you feel it's still important to be able to present a physical product rather than just focusing on a digital release?
Olivia Davina: "These days it mainly makes for a great calling card. We're a budding band and being able to hand festival organizers or promotors a physical EP or album, shows them you mean business and also gives them an idea of our music. If you want to be taken seriously in the music business, it just helps, that's all."

I'm sitting face to face with two dreads, so I can't but wonder… Does the Rastafarian philosophy play any kind of role in your lives and the music you turn out?
Quincy: "I don't consider myself to be a Rastafarian, but I do respect the livity and can recognize myself in certain aspects of it. That being said, the same is true for other cultures and religions. As long as it's about love, I'm ok with it! (laughs)"