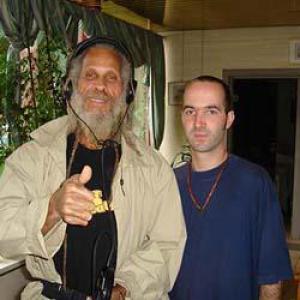 These days The Congos' line-up consists of four members. Even your most loyal fans seem confused as to who's who sometimes, so could you maybe introduce the members shortly?
Cedric Myton: "Well, we recruited Kenroy Fyffe (father of Lady G, red.) as an extra background singer. He's a new recruit so to speak. Apart from him it's still Watty Burnett and Roydell Johnson (aka. Ashanti Roy, red.). We're also touring with Little David, who was our original guitarist. He was already there when I came to Europe for one of the first times in the late seventies. Over the course of time everyone went his own way, but now we have come back together in unity to spread the message. In this time and age we have to be serious about that kind of thing, because there is work to be done. Maybe if we had stayed together all this time we would have progressed further, but I give thanks still for the 'Heart Of The Congos' album that helped open certain doors and kicked down barriers."

How do you remember the time you spent working with that crazy genius?
Cedric Myton: "(laughs) Yeah, he really is a crazy little genius. He's a master in what he does and he goes about it very scientifically. Whenever people talk about The Congos, Lee Perry is always mentioned, so I have to say he made a crucial contribution to that first album. Big him up! Scratch Perry number one still!"

In those times you guys were also very sought after as a backing vocalists. What are some of the great moments or collaborations you remember?
Cedric Myton: "We had some great times in the studios back then, working with groups like The Meditations and The Heptones, but the other way around a lot of those people also did background vocals on 'Heart Of The Congos'. Gregory Isaacs was there, The Meditations and Barry (Llewelyn, red.) and Earl (Morgan, red.) from The Heptones. It was a mystical gathering!"

Musical style and taste has much changed in Jamaica over the past decades. You're still much loved and appreciated over here in Europe, but how is it in your home country? Do you still perform there?
Cedric Myton: "Yes! We performed at the Rebel Salute festival this year and we got a good response from the people. Some of the Jamaican people are not quite ready for it though! Jamaicans are too rebellious by nature you know (laughs), so it's kind of up to us to change the people with our message. The radio stations also play a big part in this. They only play what they want to play and our kind of music, the old school thing let's say, is often overlooked."

The 'Fisherman Style' album must have felt good though. That was almost an ode to The Congos by a host of new and talented artists.
Cedric Myton: "(laughs) Yeah! It was my idea to do that. I had the idea, told Ashanti and then we took it to Blood & Fire. It's selling well and it's a part of that positive phase The Congos seem to be in now."

Cedric, I want to thank you for taking the time out to do this at this late hour. It was a great honour and I hope to see you guys again soon.
Cedric Myton: "Yeah, I appreciate it too! It's all in the mix, because we're touring Europe again in September. The album will be out then and we will be promoting the new songs!"

Don't forget about this little country called Belgium then!
Cedric Myton: "(enthusiastically) I love Belgium you know. It's one of my favourite places. The people really enjoy themselves here. I wasn't at my best tonight, but I tried and the people still cheered me on! I love that! One love!"