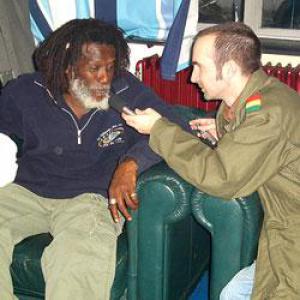 Blessings Roy. We must be blessed here in Belgium to have you back already so soon after the Reggae Geel festival this summer.
Ashanti Roy: "Yeah man. After many years The Congos are on the road again! I know the people were waiting for our good message, so we finally decided to unite our minds and give it to them. Spiritual vibes!"

You also put out a new record, 'Swinging Bridge'. After so many years, how does that feel?
Ashanti Roy: "Well, the album came out in France, on the Médiacom label, but everything is just the same, nothing really changed. Our vibes and spiritual inspirations have stayed the same, so we can still make our music sound as if it were something from the seventies."

From all the members of The Congos, you had the biggest link or background with Lee Perry. You guys went to school together?
Ashanti Roy: "Yeah, Perry and me, we were born in the same village, in Hanover. We went to school together for some time and then he moved to town to get into music. After I followed and we linked up again."

Did you already work for him before you met the other members of The Congos?
Ashanti Roy: "Yeah, I did one song for him but I don't quite remember the title ('Standing On The Hill', red.), it's been so long now. Perry is a good friend and a good man. In part he made The Congos what they are today, so I give thanks."

When that order first appeared in Jamaica, way back in the forties or...
Ashanti Roy: "The thirties yeah..."

The spiritual homeland for Rastafarians is Ethiopia...
Ashanti Roy: "(interrupts) It is Zion, not even Ethiopia! Ethiopia is just Ethiopia. We look for Mount Zion heights!"

Your own nickname, Ashanti, points back to Ghana. Why is that?
Ashanti Roy: "Well, because we know the slaves were taken away from Ghana. A lot of members of the Ashanti tribe were brought to Jamaica along with members of the Bobo tribe (originally living in what is now Burkina Faso and Mali, red.) and the Ibo tribe (originally living in what is now Nigeria, red.) and so many others. I took that name because I knew that was where my roots lay."

Can I just give you a couple of names and you can tell me what they mean to you?
Ashanti Roy: "Yeah man!"

Ok, let's start with: The Congos?
Ashanti Roy: "The Congos came about when we were working in the studio on that tune 'Congoman' (sings): "Congo Ashanti, Bongo Ashanti..." That's how we came up with the name.

I have to add Africa then.
Ashanti Roy: "Things and time change you know. Africa is alright. Africa is the land of the sun! Yeah!"

The lyrics of a lot of songs by The Congos are very biblical in reference, very spiritual also. You tour all over the world now, performing for various audiences. Do you think the younger generation still gets these references? Do they still read their Bible?
Ashanti Roy: "Yeah! They are getting back into it. They hear our message and try to adapt it to their lives. Things like keeping cool, not using guns and just dealing with love and unity. The consciousness is growing. The youths are listening and I appreciate them getting into it. I give thanks."

Is there anything you still want to part with, want to say to end the interview?
Ashanti Roy: "Listen to the music of The Congos, to our lyrics. Enjoy it and it will make you feel better. It will help you find the light! Rastafari!"