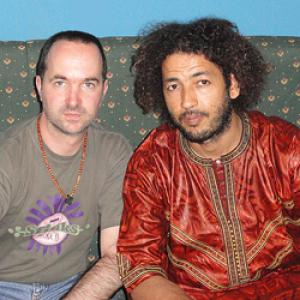 Sanou, Terakaft and Tinariwen are linked both musically and socially (Kedhou ag Ossad, bandleader with Terakaft and guitarist Diara, played on Tinariwen's 1992 debut album uit and on 'The Radio Tisdas Sessions' from 2001. Intayaden, together with Abraybone and Alhassan a founding member of Tinariwen, is Diara's older brother and Sanou's cousin. Sanou is also a childhood friend of Eyadou ag Leche, red.). Are there differences between the two bands we should be aware of?
Sanou ag Ahmed (guitar, bass, vocals): "No, there aren't any big differences because we all started out playing music together. It's only afterwards two separate bands developed. Both our music and that of Tinariwen is based on the rhythm of the tinde (traditional Tuareg drum, red.). When we started touring influences from genres like blues, rock and reggae slowly started filtering though."

Is it your impression Tuareg music is still evolving?
Sanou ag Ahmed: "Very much so, yes. Even though rhythmically it hasn't changed much, Tuareg music has seen great changes in a very short time span."

The title of your most recent album, 'Kel Tamasheq' ("we who speak Tamasheq", red.) is a reference to the Tamasheq language. Are that language and the related alphabet (tifinagh, red.) still very much alive in Tuareg society?
Sanou ag Ahmed: "It's one of the things that unites the different Tuareg communities scattered over various nations. There are very few schools in Tuareg territory and things like books and pens are considered luxury items in our parts, so Tuareg children still often learn to read and write in the sand or on big boulders."

As musicians you guys are on the road a lot of the time. What do you miss most during these trips?
Sanou ag Ahmed: "When we're on the road I often get a feeling called "assouf" in Tamasheq; a longing for the tranquility, the beauty of the desert and, above all else, the sense of absolute freedom you can experience there. That sense of liberty a Tuareg can only find in the desert."

In 2012 the north of Mali was invaded and occupied by Islamic rebels. What's the situation like at present?
Sanou ag Ahmed: "After the French arrived (At the request of the Malinese government France sent troops to the area to assist the Malinese army in pushing back the rebels. Operation Serval eventually led to the recapture of three cities that were occupied by the rebels: Gao, Timbuktu and Kidal, red.) things stabilized again. When the Islamic forces invaded Mali many Tuareg fled the country, as they found themselves caught between the advancing Islamic forces, descending from Libya after the ousting of Khadafy, and the Malian army. In the meantime most of them have returned to their homes though."

In the West people will know Tuareg culture mostly from bands like yourselves and Tinariwen, but what's the life of an average Tuareg like?
Sanou ag Ahmed: "Most Tuareg still live a rather harsh nomadic existence; in practical terms that means they walk their animals, often sheep or camels, from well to well. For a Tuareg the constant search for grass and water is simply a life or death matter!"

You're musicians, but do you guys also consider yourselves freedom fighters?
Sanou ag Ahmed: "Above all else we're musicians and we don't mind leaving warfare to others. We've exchanged our weapons for guitars because we wanted peace for our people, and these days our instruments are our guns and the lyrics of our songs the bullets we fire!"