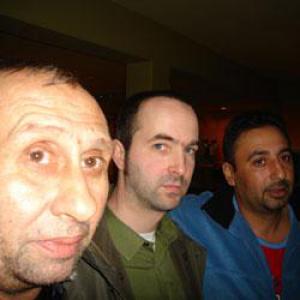 Given a choice, Roma musicians tend to opt to let their instruments rather than their voices do the talking and the added language barrier doesn't make conversing with them any easier. With the assistance of Stéphane Karo from Divano Production in Brussels, the man who discovered Taraf de Haïdouks and now also acts as their manager, we managed to talk to a couple of members of the band nonetheless. Travel with us to the mysterious world of Taraf de Haïdouks, the world's most popular lăutari or gipsy musicians from Clejani in Romania.

Stéphane, if I understood correctly, Taraf's history more or less started when, during a visit of Romania somewhere in the early nineties, you stumbled on the village of Clejani.
Stéphane Karo: "Right, I was travelling in Romania - not my first time over there by the way - and I really wanted to meet some real gipsy musicians. At one stage I arrived in a little village called Clejani where nearly everyone played an instrument. When I saw and heard those people play, the international potential of it all struck me immediately. It was still the age of the Ceaucescu regime, so travelling freely through the country wasn't obvious. If the revolution hadn't happened I might not even have returned there. Although it wasn't really my thing - I was still a musician myself in those days - I managed to organise them a small tour and that's when everything started."

Almost all the members of the band come from that village. Can you tell us a little more about the place?
Ion 'Ionica' Tanase (cymbalom): "Clejani is located about forty kilometres from the Romanian capital Bucharest. It's a very small village with only about four thousand inhabitants, most of whom are musicians of some sorts."
Marin 'Marius' Manole (accordion): "And Taraf de Haïdouks is really composed of the best musicians in the village."

Taraf has been enjoying international popularity for some years now. Has that popularity changed life in the village at all?
Marius: "No, not really. The quality of life improved slightly after the fall of the Ceaucescu regime, but things haven't really changed a great deal."

Stéphane, the countries of the former Eastern bloc are really teaming with gipsy bands. What made Taraf stand out?
Stéphane Karo: "My grandfather ran one of the first Hungarian restaurants in Brussels, with a little gipsy ensemble playing there every night. That way gipsy music already entered my life at a very young age. When I heard Taraf play for the first time, their music really reminded me of the vibe I had known as a young boy. Today, with more than twenty years of experience with this type of music on my record, I also noted that the Eastern European countries are swarming with gipsy bands of different background and quality. The style has gained enormously in popularity recently - one might even call it a hype - with deejays who play gipsy music in clubs all night long. I'm not a big fan of these gipsy dance-nights, because you won't see many real Roma there."

You're talking about deejays, like Shantel or Gaetano Fabri, who've brought the genre to a whole new young and trendy audience. Where do you think the attraction of that music music lies for those youngsters?
Stéphane Karo: "What Shantel does is make remixes; he puts traditional gipsy music in a new jacket so to speak and he does that by adding elements that are already popular in youth culture. Gipsy is a fashion statement at the moment, the hype of the hour. When the Berlin wall fell and the borders with Eastern Europe were opened, this music became readily available and easy accessible. It really doesn't mean all that much; everything comes and goes as time passes. Gipsy music might be in fashion now, but the gipsies themselves are still faced with discrimination and abuse on a regular basis. A recent example is the case of the Romanian boy who killed a woman in Italy. This solitary crime spurred a nationwide hunt for gipsies in that country. That was racism pure and simple and in today's Europe I find that disgraceful."

For your tours you guys have travelled the world several times now. Has that in any way changed or influenced your music?
Marius: "Yes, absolutely. Not only regarding the recent classical music project we did for the new album, but other than that you will now also find Bulgarian, Turkish and even Jazz influences in our music."
Stéphane Karo: "Production-wise we've tried to keep the music attractive and fresh. Taraf's music has modernised a little, but the base is still well-rooted in tradition. What also played a role is that we've lost three of our veteran musicians. The core of the group disappeared in very little time (Nicolae 'Culai' Neacşu, violinist and vocalist, died in 2002, Ionel Manole, accordionist, in 2003 and cymbalist Dumitru 'Cacurică' Baicu followed his friends in 2007, red.). That's why we chose to try something completely new for the new album by adapting classical music; as if to mark a new beginning so to speak. I'm really happy with the final result, but the journey has been much more difficult than anticipated. Thanks to this album you can see youngsters dancing to tunes that are maybe a century or two old. We wanted to find a way to preserve our authenticity while being different and original at the same time and I think we've succeeded with this album."

You left a good number of years between your last album, 'Band Of Gypsies', and the new release 'Maskarada'. Do the members of Taraf have a natural dislike of being in the studio?
Ionica: "No, it's not that. The rehearsal period for 'Maskarada' just took its time (apparently the members of Taraf de Haïdouks do not read music, so all classical pieces had to be learned by ear, red.). All in all we rehearsed the music for about a year and a half, going back and forth between Brussels and Romania. We had no previous knowledge of classical music whatsoever, so it took us a while to adapt."

The classical music catalogue is enormous. How did you go about choosing the pieces you wanted to use?
Ionica: "Well, after Stéphane came to us with the idea, we decided to look for composers who were influenced by folklore. Stéphane then brought us a bag full of tapes and cd's and after listening to those recordings, we made our final selection."

Ionica, you play the cymbalum, a typical gipsy instrument.
Ionica: "Yes, the cymbalum was introduced to Romania by gypsies about 150 years ago. I started to play the small cymbalum when I was just seven years old and then later moved on to the larger concertcymbalom. You can play the instrument in two ways: or you follow Hungarian chord settings or you play it Romanian style."

One of the most popular members of Taraf was Neacşu, who sadly passed away a few years back. How do you remember him?
Ionica: "It's now four years since he left us. The first few months after his death, whenever we were on scene, we would keep looking to the right, the place where he used to stand. Seeing that empty spot, made us very sad. Today, our grief has past, but we still think of him every night. He was not only a great singer and violinist, but also taught most of the violinists that are in the band today to play their instrument."

Roughly translated, the name 'Taraf de Haïdouks', means "Band of Rascals". What's the story behind it?
Marius: "Stéphane came up with that idea and we all liked it. Before we took that name, we didn't really have a band name as such. Whenever we were invited to play at a wedding or a party, we just used the name of the musician who had arranged the gig."

Do you still perform in Romania regularly?
Marius: "No, not that often anymore; we still play at a wedding here or there, but that's about all our busy tour schedule allows."