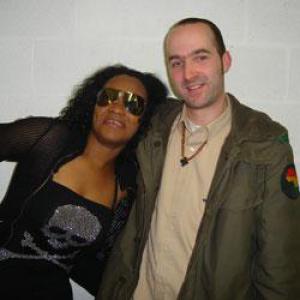 Blessings Tanya.
Tanya Stephens: "Thank you very much, I can always use blessings. (laughs)"

The last time I talked to you was about two years ago, at the Reggae Sundance festival in Holland. Your 'Gangsta Blues' album was still going strong then, so there was no talk yet of a successor. You're now touring to promote your new album 'Rebelution'. How and where did that project take shape?
Tanya Stephens: "It's always difficult to pinpoint an exact time when a project starts. It's all about ideas that start to develop or topics I want to discuss. Putting the actual record together took about six months."

You called it 'Rebelution', now when I saw that I immediately wondered what the difference between a rebelution and a revolution was.
Tanya Stephens: "When you think of revolution the first thing that comes to mind really is violence even though it doesn't necessarily follow. I just had to add "rebel" because I've always been a rebel and the other part of the word didn't really spring from thinking of revolution, but rather of evolution. I'm an evolutionary. I believe in change, especially if it's for the better. I think we, as a human race, have started that process a long time ago, but it's time to speed it up a little. We've been stuck in the same frame of mind for quite a while now. Our governmental systems aren't working for anybody not even for the ones who are implementing them. I want to be a part of the movement that changes things for the better. That's why I named this album this way. However, it's not something I started. I'm just adding my bit."

The photo on the album cover of you wearing a red beret kind of makes the viewer think of iconic revolutionaries like Che Guevara or more recent the president of Venezuela.
Tanya Stephens: "(enthusiastically) You mean Chavez? I just love the guy!"

That's something we got in common then. So is there a political side to Tanya Stephens?
Tanya Stephens: "The thing is I don't even particularly love these guys for the actual wars that they fought, but for the bare fact that they were willing to fight. They saw something they didn't agree with and just took steps towards changing it. For me they are romantic figures. Also I wasn't around to know every detail of what they did. It's all about change and fighting for change. That doesn't necessarily have to be done with a gun or by physically hurting someone; it just means standing up, putting your foot down and saying: "We're tired of this! We want changes!""

On this album you also didn't really go easy on your own people, if I may say so. I'm thinking of tracks like 'Come A Long Way' and 'Do You Still Care'. What brought these tracks on?
Tanya Stephens: "First of all I don't think I have to go easy on anybody, not even on myself. When I make a mistake, I asses it from a logical point of view and I implement the necessary changes. I'm the same with everybody else. Maybe it seems like I'm being harsh sometimes, but I'm not, I'm just being honest and as logical and objective as I can be. There are many problems that need to be fixed and there's no group of people that is always right about everything. If I feel I have to come down harshly on my own people, I will do so, because we need to be taken care of harshly in order for the things that aren't working to change."

In 'Come A Long Way' you ask: "Tell me now Malcolm, do we hurt your pride? Can you hear me now Rosa, was it worth the ride?" Do you feel black culture has really reached a point of bankruptcy?
Tanya Stephens: "I don't know if I would go as far as to use the word "bankruptcy", but I think many of us have been distracted by superficial things. I don't see myself as being an authority on any subject and I don't think I have the right to dictate to people how the should live, but what I've noticed is that the things we say we want to achieve, we are actually moving away from them. If we really want to get away from all the things that have clouded our past, then we are definitely heading in the wrong direction."

How big was the reaction to 'Do You Still Care' (in this song, Stephens cunningly exposes the stupidity of the homophobic attitude in Jamaica by comparing it with racism, red.) in Jamaica?
Tanya Stephens: "To be honest, I only got positive reactions in Jamaica. I was warned by quite a few people, who were afraid for me, telling me I would have to leave the island. People have come forward to express their sentiments and a lot of them were happy to hear a different point of view because Jamaica has been portrayed in a negative light for such a long time now that many people are very happy to see someone come forward to state that homophobia is not the only opinion in Jamaica."

The album is on the streets now, the tour is in full effect, but what does the future hold for Tanya Stephens? What are you still aiming for?
Tanya Stephens: "Sometimes I don't even aim! (laughs) I feel like I'm very blessed and very very lucky. I come from a very small community in rural Jamaica. I'm from the country and from very poor and humble beginnings and the fact that I'm here now, at the top of the reggae industry, to me is a huge success for a little girl with little perspectives when she was growing up. I want to taste and experience everything I can while I can, because I realise this won't last forever. I'm no idiot; I know this is a passing thing. Someone bigger, better and nicer than me will definitely come along at one point, so while I'm still here I'm doing as much as I can. If I can be a part of a greater thing, I think I have an obligation to say something that can serve a purpose and enrich as many lives as I can whilst enriching my own. I'm very very happy and I'm going to keep doing things that make me happy."