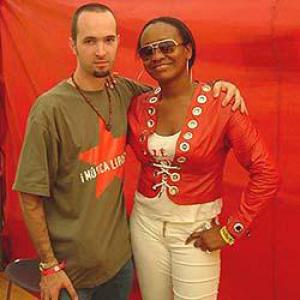 Tanya Stephens' 'Gangsta Blues' album catapulted her straight to the number one spot of most popular female dancehall artist, but her success didn't happen overnight and her story is one of ups and downs and many a disillusion in her struggle to get her vision on the music across. I met her at the Reggae Sundance festival in Eindhoven and had a conversation with an intelligent, sensitive and witty lady.

Tanya, one can't really talk to you and not mention "women in reggae". You were one of the best selling reggae artists of this year.
Tanya Stephens: "I don't really know. I know the 'Gangsta Blues' album did well, but the exact numbers I don't know."

Do you see yourself as a role model opening new doors for other female reggae artists?
Tanya Stephens: "I guess anybody that enjoys a certain amount of success automatically will become a role model to someone, but I'm afraid of it. I'm only human and I make mistakes and it would be sad for other people to follow in my footsteps and make the same mistakes. I'm just learning myself."

Before this 'Gangsta Blues' album there was a big break in Tanya Stephens' career. What happened and what made you decide to return with this album?
Tanya Stephens: "Well, it was not really a break from my musical career but more a break from Jamaica and the dancehall scene. I was still working and I never intended it to be a complete break with the Jamaican music scene, it just turned out that way. I was working in Sweden and was contracted to Warner Music there. Unfortunately we had different visions on what my music should be. I thought we were on the same page, but it turned out they wanted a pop artist and I'm too rebellious for that. So, I went back home. It was a natural thing; when you finish your work somewhere you return home."

Some claim that the Tanya that returned and did the 'Gangsta Blues' album, was a different Tanya. Do you agree?
Tanya Stephens: "I think I agree with that to an extent. I wouldn't say I'm entirely different, but I'm more mature now. I've grown up, experienced more stuff and experience does teach wisdom. You can't help going through stuff without learning something, unless you are truly stupid. There are more subtle changes in me too, for example in the way I approach my productions. Intrinsically I'm the same person tough; I have the same values, I just voice them a little more."

What sets you apart in my view, is the fact that you seem to be a lot more skilled lyrically then most of your other female colleagues. You seem to have a natural poetic flair for writing. Did you never consider publishing your lyrics in printed form, as a collection of poems?
Tanya Stephens: "(laughs) Actually, I have thought of it, because I do write actual poems too. That is really what I started out doing before I was even singing, but I just haven't had the time to do it and I don't like to do things half-heartedly, like just slapping them together just so I could say: "Look, now I did a book too!". It has to be something I concentrate on and at the moment music really takes up all of my energy. But I think I'm definitely going to do that somewhere in the future."

The title of your latest album is 'Gangsta Blues', but after having listened to it for many times now, I must say I don't find it particularly "gangsta". What about that title?
Tanya Stephens: "(laughs) I consider it my form of blues music. Blues music is basically people whining about their problems. I added the "gangsta" part because I wasn't really whining; I was pointing out what the problems were; sometimes getting mad, sometimes suggesting ways to solve them. Hardcore blues."

I would like to read you a little something now. It's an excerpt from a column by Mumia Abu Jamal, a well known Afro-American journalist who's on death row. Just this month he wrote a piece on the whole "gangsta" culture. Just tell me if you agree or not: "Now, the power of media projects the most mindless image possible of such people. They are mind-numbingly materialistic, sexist, and revel in the imagery of violence against their communities. And, as our loving fascination for things expands, our caring about people decreases. Things matter. Bling matters."
Tanya Stephens: "(laughs) Well, there certainly is truth to that, but I don't really place very much emphasis on the word "gangsta". Words aren't just restricted to their dictionary meaning. There are words that you can use affectionately when you are among friends, but which might be perceived as being inappropriate by others. When someone calls himself a thug in the world of gangsta rap, it doesn't necessarily mean he goes out to rob people or steal things. Sometimes it just means that this person is not putting up with what the system is imposing on him."

Statistics show that the 1000 mark, of people that were violently killed in Jamaica this year, has already been crossed. Things seem to be out of control. How do you see that evolve?
Tanya Stephens: "It has been out of control for a while now. I don't know if there is an easy solution at hand. It's the same as in dozens of other places in the world, we have more crime than we would like. Even if just one person dies violently, that's one person too much for me. Our focus shouldn't be trying to get the death rate down; it has to be getting to improve the comfort level of the country. If you can raise that, you can take away some of the discomfort the people are feeling, the reason why they're so angry and feel they must kill. As long as we just keep focusing on treating the wounds on our skin, instead of focusing on the disease that causes them, we won't get rid of it."