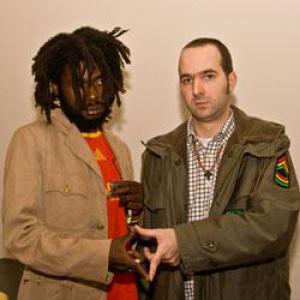 Takana Zion's debut album, 'Zion Prophet', immediately struck the right cord and his nickname 'African Sizzla' only raised our expectations. Just before he went on stage at the Antwerp Zuiderpershuis, we had a chat with the man from Guinea.

Takana, what's the story behind your stage name? Does it have a meaning?
Takana Zion: "Yes it does. In Susu, my native language from Guinea-Conakry, Takana means "destroy the town". It's like an order from Jah and the word refers to changing a wrong mentality or a bad attitude and replacing it with education."

Is it a name you chose yourself or that was given to you?
Takana Zion: "I got it from my friends. Before they used to call me Mooz Bee, but there was already another rapper by that name. When my popularity started to grow, people told me I should find my own name. At that time some Senegalese rappers called Yat-Fu had a song with the words "maka takana". My friends started to call me Mooz Bee Takana. In Wolof Takana means "light up the fire" and in Bambara, the language from Mali, it means "go and come". When I discovered Rastafari, Moose Bee disappeared and I added Zion."

You just mentioned you started out in hip hop as a rapper, but now you're performing conscious rootsreggae. How did you discover Rastafari?
Takana Zion: "Selassie I! Ever since I was a young youth I was very fond of Jamaican music. In the beginning I was more oriented towards ragga artists like Shabba Ranks and Buju Banton. Slowly I also got into the music of Bob Marley and I often translated the lyrics of his songs from English to French to see what he was talking about. That motivated me to learn English as well, because I really wanted to grasp what the Rasta men were talking about. I discovered their message was very deep and interesting. After Bob I also discovered the music of Peter Tosh, which is a little rougher and tougher content-wise. That's how I discovered Rastafari."

You're originally from Guinea, but you ended up in Mali. How did that happen?
Takana Zion: "(laughs) Well, the socio-political and economical situation in my country is just very bad. Life is very hard. I wasn't even born in a poor family though. My father is a member of parliament. We are a big family and I'm the last one of twelve children. As I said, we weren't a poor family, but I was always attracted to the life and the people in the ghetto. Hafia (Dixinn, red.) is the most dangerous area in Conakry. My parents always told me not to differentiate between poor and rich people, but to show love for everyone. I hung around with the ghetto youths a lot and sometimes skipped school to go to the beach and practise my vocal skills. The first time I heard Sizzla I was very pleasantly surprised. He influenced me a lot and in my music I try to blend his style with the traditional sounds from Africa. Even if Jamaican music is very different from the traditional music we play in Africa, I'm convinced that what I call "the black emotion" in the music, the feel if you want, is the same everywhere."

You're promoted as being the 'African Sizzla'. Is that a title you agree with?
Takana Zion: "Yes, I'm proud of that, because Sizzla is a big man in today's reggae scene. It's the same as being called the African Bob Marley. Sizzla is the Bob Marley of our time."

As an African Rastafarian, do you think there's a difference between the Rastafarians living in the Diaspora and the ones already living in Africa?
Takana Zion: "No, there's no difference. Some people try to bring confusion in the people's minds, but the only thing you have to know as a Rastafarian is that Haile Selassie I is the Almighty. I discovered Rastafari all by myself. I was born in a Muslim family and prayed to Allah, even though I had no notion of whom or what Allah was. At a certain point in my life, I started questioning my identity as an African and our history. I discovered the black man was the first to walk this earth. Everything started in Africa and there really is only one race of people. You are only a white man today because of the migrations that took place thousands of years ago. Being a descendant from the first race, I realised no one could come and tell me about God. As a black man I had to define myself. That's how I discovered the message of Rastafari and I started to learn about the life of His Imperial Majesty Haile Selassie I who's also the father of African Unity (The Organisation of African Unity or Organisation de l'Unité Africaine was established on 25 May 1963. It was disbanded on 9 July 2002 by its last chairperson, South African President Thabo Mbeki and replaced by the African Union.
The OAU had two primary aims: Promote the unity and solidarity of the African states and act as a collective voice for the African continent. The OAU was also dedicated to the eradication of all forms of colonialism, as, when it was established, there was still a number of states that had not yet won their independence or were minority-ruled, red.). Our message is one of unity. The whole of humanity should take heed of the words of His Majesty and strive for the betterment of the world."

How are Rastafarians regarded in countries like Guinea and Mali, which are still predominantly Muslim?
Takana Zion: "As I said, I'm from a Muslim family myself and when I told my family I no longer wanted to pray to Allah and that Rastafari was my God now, my mother started to shout at me. My stepmother even wanted to burn my bible. Luckily my mother was too afraid to do that. People have a hard time understanding that we consider a living man to be God! (laughs) Nonetheless everyone knows Jah created man in his own likeness. There are many lights in the sky but the sun is the brightest, likewise on earth there are many men, but Haile Selassie is the Alpha and Omega."

Returning to your music, ‘Zion Prophet' is your first album release, but it's not really the first album you recorded.
Takana Zion: "(sighs) No, I already recorded two albums for Tiken Jah Fakoly."

Will they ever see the light?
Takana Zion: "Well, they're not lost. I'll probably rerecord them at one stage. Right now I have to look forward though. Those records contain messages that were current when I recorded them, but aren't really what I'm about now."

For 'Zion Prophet' you collaborated with Manjul. How did you guys first meet?
Takana Zion: "I met Manjul for the first time on Lassa hill during a Nyahbinghi session to celebrate Bob Marley's birthday. I had already heard about him from Tiken Jah. Manjul told me to stand firm and not to forsake my musical mission, the reason why I came to Mali. That's where everything started."