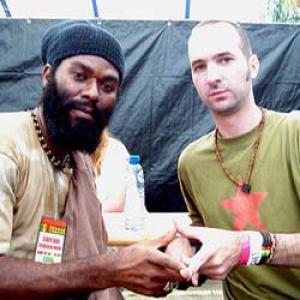 Blessings Taffari. Welcome here in Holland. I'm a Belgian journalist and if I'm informed correctly there's slight connection between Taffari and Belgium.
Taffari: "Yeah! I think you're referring to Crucial P (Peter Piessens, red.). I give thanks for Crucial P, because he helped to spread my name and he really contributed a lot of good things. I give thanks to Reggae Vibes too for their contribution in my upliftment in the music business."

How did you guys hook up originally?
Taffari: "I met Crucial P in Jamaica; I think it was in 1999. I used to hang around at Sylton Gordon's 321 Strong recording studio and that's where we met and started reasoning. I did some things for him, because I also own a label called Al.Ta.Fa.An records in collaboration with Anthony Senior and from thereon we stayed in touch through e-mail an by telephone."

You started out under the name Singing Bird but later on changed your stage name to Taffari. What happened there?
Taffari: "When I used the name Singing Bird, I used to sing mostly love songs and cover versions. I took a break from the music business, but by the end of the nineties hooked up with Sylton from 321 Strong records again. At that time Rastafari started to manifest himself in me, so I decided to change the name. I felt the name Singing Bird didn't suit my image anymore, so I needed a name that was right. Furthermore there were already three other singers around with the name Singing Bird, so that also motivated me to change it. People always told me: "Hey man, you look like Ras Tafari (Haile Selassie, red.)!" and it is true, I look a little like the Emperor, so I took the name Taffari."

You just mentioned your involvement in the Al.Ta.Fa.An label. Who else is involved in that project and what are the plans for the near future? I already saw that you guys launched a website for example (www.altafaan.com, red.).
Taffari: "Well firstly it was Anthony Senior and myself. Anthony used to serve as a soldier in the army and I brought him into the music business. Since that time we've become like brothers. Now when I was doing these recordings for Sylton, things really weren't moving the way I wanted them to and since I always wanted to create my own label anyway we decided to do so. At first we called it Togetherness records, but after a while Anthony noticed that there was already another label by that name. By then it was already a foursome: Anthony Senior, Taffari, Fabian Francis and Al Graham. We took the first two letters of each first name and put them together. The last two members dropped out after a while because they never really wanted to invest their time and money in the label. Right now Anthony Senior is in Jamaica, doing most of the work. We're ready to take it to a next level now. We've just released an album with Chezidek ('Mash Dem Down', red.) and a one riddim compilation on the Tsahai riddim."