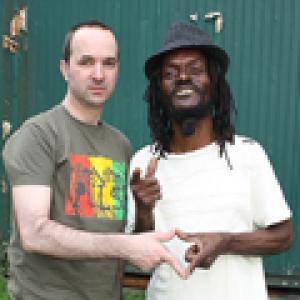 Sylford, the very first producer you managed to convince to let you voice a tune was Joe Gibbs.
Sylford Walker: "Well, I did record a tune for Clive Chin earlier, but that was never released. Joe Gibbs was the man who really launched my career. I wrote that song ('Burn Babylon') while I was in jail as I got arrested for smoking a spliff. I based the vibe of the song on Burning Spear, who was one of my great idols. After I got out of jail, it still took me almost a year to find a producer who wanted to record me. Unfortunately 'Burn Babylon' didn't sell well, so after a while I decided to record another tune and try again. 'Golden Pen' was a song I adapted from a hymn I sang in church. At that time I was living in the same street as Glen Brown and he eventually invited me to come down to King Tubby's studio where I voiced the tracks that later became the 'Lamb's Bread' album. I never got any money for that album though until it was rereleased years later by Blood & Fire in the UK ('Lamb's Bread International', 2000, red.)! They paid me a thousand pounds, which I used to buy a small house in the country where I still live today. I moved to a place called Yallahs in St Thomas. I'm a five time grandfather now and I'm getting on a bit in life, so I have to start worrying about my old day. On top of all that I was badly injured in a car accident a few years back and it took me quite a while to revalidate."

Did any of your children choose the path of music?
Sylford Walker: "No and it's kind of sad because there's a few who have a really nice voice. One of my grandsons is showing some inclinations though, so who knows he might pursue it one day. With all the do-it-yourself computer stuff it's also not as hard as it's used to be; virtually anyone can record a tune these days. Still, if you're looking for longevity, the answer is still in old school studio recordings with a band behind you if you ask me."

Between the time you recorded the 'Lamb's Bread' set and the release of the album, nearly ten years passed. Why did it take Glen Brown so long to put the album out there?
Sylford Walker: "No idea man! Who knows what some of these producers, or reducers as I prefer to call them, are thinking about. That being said, when I recorded them, I couldn't have imagined that these songs would still be around today."

Apparently Glen isn't doing so well these days (On July 15th 2013, the Jamaica Observer published an article stating Glen Brown was suffering from renal failure, diabetes, loss of vision, dementia, and a heart condition and was admitted to a nursing home in New York, red.).
Sylford Walker: "Yeah, I've been told that as well. From what I've been told he's in the poor house now. We've kind of lost touch when he moved to the US."

You just told me Blood & Fire came to find you in the 1990s. What had you been doing to survive until then?
Sylford Walker: "I got by brewing and selling my own roots mixture. I still brew a batch for my own use every so often, but these days my focus is back on my musical career."

On the photos used for the cover of the 'Lamb's Bread' album you hadn't dreaded up yet. At which stage did Rastafari come into your life?
Sylford Walker: "I got an awakening when I spent that year in jail for smoking a spliff. From when I was still a kid I was always told smoking ganja was a bad thing, but when I finally tried it I discovered for myself there was no truth in that. When I was thrown in jail for smoking herb, I noticed firsthand how Babylon treated the Rastaman. To I&I Rastafari is not just about growing locks, it's about what is in your heart. I give thanks to the Most High for all he has done for me. Rastafari!"