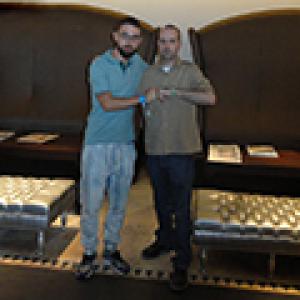 Sr. Wilson, as an introduction, could you tell us how exactly you got involved in reggae music?
Sr. Wilson: "I've been doing reggae for about ten years now, but I've only started to take it more seriously in the last four to five years, collaborating with various sound systems. Before that time I was still into rock and nu metal. By listing to nu-metal I also discovered hip-hop. At the time I was still living in Valencia which had a quite an extensive hip-hop scene at the time. By listening to hip-hop I eventually also discovered ragga and dancehall and that's how I slowly started gravitating towards reggae. That being said my first introduction to reggae music really came through my parents who played Bob Marley, Peter Tosh and some other more commercial reggae artists. After working with a local sound crew called Jump'n'Jawah Sound System in Valencia for a while, about eight years ago I moved to Barcelona where I joined Badalonian Sound."

What exactly prompted the move to Barcelona?
Sr. Wilson: "Because of my parent's jobs I moved around a lot; I've even lived in Colombia for a while. When my parents moved to Barcelona, I just followed and enrolled myself in a sound engineering course."

How would you describe your style, which has a certain vintage quality about it?
Sr. Wilson: "Well, for that I have to thank the people who introduced me to reggae music (a story Sr. Wilson nicely captured in 'My Teachers', closing track on his latest album 'Paso Firme', red.). Most people who discover reggae and dancehall will do so by listening to mainstream artists like Sean Paul or Shaggy. Through joining Badalonian Sound I really got the chance to discover the whole range of the music starting all the way at Studio One and Treasure Isle and slowly working my way back. I've always been attracted to that old school flavor. These days I guess I incorporate both influences from the nineteen seventies and eighties into my style. I love new roots and modern dancehall as well, but that vintage thing is just something that's in me."

Many European reggae artists of your generation would like nothing more than to get the chance to record in Jamaica. Is that also one of your aspirations?
Sr. Wilson: "I first visited Jamaica about four years ago, but that was more of a holiday than a working trip. Back then I was still discovering the whole reggae culture. I think every amateur of reggae should at least visit Jamaica once. I would definitely like to return to hook up with some of the producers over there and record is some of the iconic studios. It's also interesting to visit the island from a linguistic point of view, to pick up some more patois and improve your own verbal skills. To me Jamaica and the UK are still the epicenters of reggae music or at least the kind of reggae music I really appreciate, so it only stands to reason that I like to visit these places."

For your second album, 'Paso Firme', you collaborated with Reggaeland Records producer Genis Trani. How did that link come about?
Sr. Wilson: "In truth the reggae scene in Barcelona isn't all that big, so everybody knows one another. We already wanted to work together for the longest time, but the financial side of things prevented that until now. Genis really knows how to create that Jamaican new roots flavor I really like and he's just as proficient in creating a nineteen seventies or eighties style riddim. With this album I wanted to accentuate the different flavors that are in me and Genis was the perfect man for the job. I already recorded several tunes over Reggaeland riddims in the past, so the link was already there. I also focused more on singing in Spanish for this album, because a lot of my Spanish speaking fans were asking why I'm singing in patois all the time."

Has the philosophy of Rastafari played any role in your evolvement as an artist and a person?
Sr. Wilson: "Well, personally I don't consider Rastafarianism to be a religion, but rather a way of living or "livity" as they call it themselves. To me Rastafarianism means people power and first and foremost it's about one love, respecting one another and sharing your knowledge and capabilities. It's also about equality, regardless of the color of your skin or your nationality."

In conclusion, can you tell us the provenance of your stage name?
Sr. Wilson: "Well, when I was still in high school, I began growing a beard and my friends started comparing me with the character Tom Hanks portrayed in 'Cast Away' (Robert Zemeckis, 2000). In that movie he gets stranded on a deserted island, with a volleyball he calls Wilson as his only companion. My friends first started calling me "naufrago" ("castaway", red.), but after a while switched to Wilson. When I started getting involved in hip-hop I added "señor" or "sir" in English, to make it sound just that little bit more elegant. In all honesty I really kept the name as a tribute to my friends."