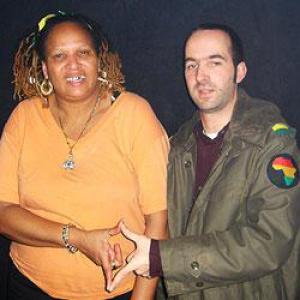 Sister Nancy, you're always referred to as being the first female deejay in Jamaica...
Sister Nancy: "That's correct. I was the first one, the one who started it all."

Did you have any role models to look up to then, being the first woman to take up the trade so to speak?
Sister Nancy: "Yes I did, my brother Brigadier Jerry. He was my motivator ever since I started at the age of fifteen. That's thirty years ago now. I saw him do it and, going to school one day, I told myself: "Hey, that's something I would like to do too!""

When you started out, were you an immediate hit in Jamaica?
Sister Nancy: "No, but nobody really is. You have to allow yourself to grow and learn how to please the Jamaican audience. It took a long time for me, because my voice was really fragile when I started out. You can still hear that one the ‘One, Two' album. Today my voice has matured a lot. At first I wasn't really accepted, but after about two years I got into it."

Of course we can't leave out talking about one specific tune. You've had many hits, but none of the calibre of 'Bam Bam'. When you did the tune, did you see that coming in any way?
Sister Nancy: "No! I never wrote 'Bam Bam', I just had the idea to do 'Bam Bam'. I wrote the rest of the tunes for the 'One, Two' album, but I didn't have enough tracks to complete the album. I only had nine tunes, so I needed a tenth. I heard Yellowman do a version of 'Bam Bam' and thought to myself: "Well, I might just as well give that a try too!" It's been haunting me for twenty-five years now!"

What do you think is the secret of that song?
Sister Nancy: "I think it's just a damn classic hit! You can't say anything about it. It's just ‘Bam Bam'! Anywhere in the world that I go, that's what they want to hear."

I heard more than enough Rastafari references in your act tonight. When did Rastafari find you?
Sister Nancy: "Rastafari is an inborn concept, but you have to look for it to find it. For me it was around the age of 18 and I've upheld it to this day."

Does that also mean that you stay true to conscious lyrics? You wouldn't write or sing a slackness tune for example?
Sister Nancy: "No I would never ever talk slack! Culture must stay on top always! I truly believe in that. It's the best thing for me and for the kids as well. At least this way they can learn something. But nothing good can come out of slackness. It's exactly that what's mashing up the business right now. I don't like it at all."

In conclusion, do you have a message for your Belgian fans?
Sister Nancy: "Keep staying with me and I'll be there just as long as you want me. The more you live is the more you learn and good things come to those who wait! Keep the faith and do good things.  For the kids: stay in school! And for the grown-ups: just be good to yourselves and each other. Rastafari live! Selassie I!"