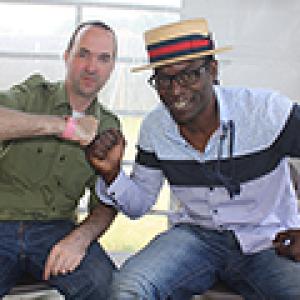 Shinehead, you were born in the UK, but somehow you ended up in the US. What exactly is the story there?
Shinehead: "Well, you know have some people have the travelling gene? I guess my parents were a bit like that. Before we moved to the US, we still lived in Jamaica for a while, but basically I grew up in New York."

I think I can safely say that growing up in that cosmopolitan city steered your career in a certain direction, you might not have thought of would you have stayed in the UK.
Shinehead: "Good point, but the formative years I spent in Jamaica also played an important role. I remember going to a dance with some of my cousins and some neighborhood friends from back in Saint Thomas where we were living at the time. It was around Christmas time back in 1969 and I can still remember the first tune I heard approaching from the distance, it was '54-46 That's My Number' by Toots & The Maytals. I was just a little kid of seven years old at the time, so after a while I started to get tired and looked for a place where I could lay down for a while. I saw this big black square thing and crawled on top, but after some time this box started grumbling and shaking and I realized I had made a mistake and was trying to fall asleep on top of one of the bass boxes of the sound system! I still believe to this day, that is when I caught the reggae fever. When I was a bit older I travelled to Kingston where my uncle who owned his own sound system and had a huge record collection, which didn't necessarily consist of reggae music but rather of American rhythm & blues and soul bands like The Temptations, The Jackson Five. Those two things are definitely at the root of the artist I eventually beca me. Now we moved to New York in 1976 and anybody who knows anything about music history will tell you that was exactly the time when you would also start hearing the first hip-hop crews emerge (an era beautifully payed tribute to by Baz Luhrmann in his 2016 'The Get Down' TV-series, red.). The first artist I discovered in that brand new genre was a guy called Cool Herc, who was then still doing b-boying (breakdancing, red.) as hip-hop was still in its infancy and the term hadn't been invented yet. Soon after I also discovered Grandmaster Flash and Afrika Bambaataa and started hanging out in places like Renaissance, Sparkle, Disco Fever and Audubon."

So when you started doing your own thing, did you purposely set out to fuse hip-hop and reggae?
Shinehead: "It was a natural thing that sprouted from my genuine love for both genres. I loved and lived hip-hop and the same was true for reggae. And in the end it worked as well, so why not?"

The first tune you ever recorded was a cover version of Michael Jackson's 'Billy Jean'. Why Michael?
Shinehead: "Well it wasn't just Michael, as I already mentioned for me it started with that record collection of my uncle and one of the albums in there was one by The Jackson Five. Seeing these little black youths one the cover of the album was like an eye-opener to me; it made me think: "Well, if they can do it, maybe there's a chance for me as well!". When I first heard the riddim of 'Billy Jean', it just captivated me."

Your biggest tune to date is of course 'Jamaican In New York', a tune about your own situation, but also that of a whole generation of Jamaican migrants living in the United States.
Shinehead: "Yes, Jamericans as we affectionately call them! It was my former manager who proposed the original Sting song to me and told me: "Why don't you try to do a version of this?". I had no idea the tune would ever become as big as it eventually did, but I already knew the original as I was a fan of Sting's music, especially the stuff he did when he was still a member of The Police."

In 1999 you released the 'Praises' album. If I describe that album as your return to Jamaica, would you agree?
Shinehead: "Yes, I agree; that album took me back to the island both musically and physically."

After 'Praises' things went kind of quiet. What have you been up to in the past years?
Shinehead: "I took a bit of a break from music, to focus on family life. Among other things I got married. I really needed that time to grow as a husband and a father. I'd rather do that then get a burnout or get frustrated, you know."

I have to ask… How did you come by the Shinehead name?
Shinehead: "That started out as a simple joke… I used to wear my hair in kind of a wavy beehive shape, so my friends started calling me Shinehead. At first I didn't like the name at all and even got angry when they called me like that, but it stuck so I decided to stick with it as well."

And now Shinehead is part of musical history!
Shinehead: "I am? I guess so yes, thanks for the compliment!"