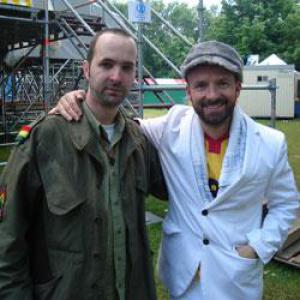 Disko disko Partizani! Amateurs of gypsy music and Balkan beats, will not be unfamiliar with the battle cry of Stefan Hantel aka. Shantel. This young German went in search of his Eastern-European roots and returned with the magic word ‘Bucovina' and a musical stroke of genius: at his Bucovina Club Nights he would start mixing century old gypsy music with modern dance beats. Nowadays Shantel is backed by a full live band, the Bucovina Club Orkestra, and after a steaming set at Festival Mundial we asked him to divulge some of the secrets behind his success story.

Shantel, you rose to fame with the Bucovina Club Nights you started to organize in Frankfurt. What or where is this illusive Bucovina?
Shantel: "Bucovina is a region that stretches out on both sides of the Ukrainian-Romanian border. My mother's side of the family is from there, from the town of Chernivtsi. Bucovina has always been a symbol of a very creative mixed society. Before the Second World War, Bucovina was famous for being a crossroads of cultures, different languages and religions. Somehow they all managed to live together peacefully. This creative melting pot got destroyed by the nationalism and racist ideology that reigned throughout the early part of the 20th century. I found it to be a great shame that these places in continental Europe, with often rich historical backgrounds attached to them, were now forgotten. Having roots there myself, I wanted to try to revive the myth and spirit of Bucovina. I didn't want to create a folkloristic image of the place though; instead I used certain elements and influences to create a sort of virtual Bucovina. When we play at a festival where people have little or no connection with Eastern Europe or the Balkans for example, it often happens that the music we do creates an interest in these people, making them want to discover the music and culture further."

When you go out in search of new tunes, what exactly do you look for? What makes a good gypsy tune?
Shantel: "I have to say I'm not a big fan of the term "gypsy music". Gypsy music does not exist for me; it's a cliché, a stereotype I'd rather avoid using. There are great musicians that do this type of music that are gypsy, but there are many who are not and play just as well. It's all about creating great music. Before I started with the Bucovina Club sound system, I had already discovered many records in my grandmother's collection; tunes that really touched my soul in such a way, that I wanted to find a way I could make this wonderful music known to a broad audience and that's how my deejay format was born."

When and why did you decide to expand the Bucovina experience to a live band instead of just a deejay set?
Shantel: "To me it was a logical evolution of the process Bucovina was going through. The more time I spent in the studio, the more I started playing with various melodies and arrangements. I know a lot of people might think all I do is add some beats and effects to the original music, but to me it's always been a serious music project and that also means being able to perform your music live. I also saw it as an adventure; I took a chance by putting together the live band, but luckily it's been a success. The first time I tried something similar was when the whole Bucovina thing had just started and I played together with the musicians of Boban Markovic, but at that time I still felt it lacked a certain organic feel I was looking for. The band I play with now is more of a unit; there's no strict separation between electronics and acoustic instruments."

Where did you find the musicians you're playing with now?
Shantel: "Some of them I knew already, because they played in different projects I was also involved with, like the Sandy Lopicic Orkestar for example. Most of the musicians in that band are from the former Yugoslavia and somehow they all ended up studying jazz in Austria. I met them at various festivals, but they were reluctant to play the authentic Balkan music, because to them that was just old folklore. Eventually I managed to persuade them to give it a go anyway, because they liked the fact I wanted to free this music from the stereotypes that surrounded it and perform it as a rock or pop band."

You've also starting to do video clips to accompany your music. Is that something that you consider to be a natural extension of the music?
Shantel: "Well, with 'Disko Partizani' the whole experience started to feel like a full-time job for the first time. When I first started with my own record label, I just loved this type of music nobody seemed to care about, so I decided to put the music out there myself. Creating that record label, created the foundation for a structure that is still growing and doing video clips is just a way of communicating a song on a different level. It offers a great opportunity to show your work to people who otherwise might not have seen or heard you. I wasn't really aiming at MTV with those clips, to me it was more of an underground thing I wanted to put on YouTube. YouTube is a very powerful platform; it allows people from all around the planet to see which character is hiding behind the music and that's very important because in the end everything we do is about communication. To give you just one example: in Turkey the 'Disko Partizani' clip has a cult status; it has been watched millions of times and there are various home versions out there as well. Without any marketing behind it and virtually no money involved this song became number one in Turkey! Personally I find them fun to shoot and they're done with a very low budget; the 'Disko Boy' video was shot in my own living room! (laughs) I studied graphic design, so the visual aspect of things has always been very important to me."

What were the reactions you got from within the gypsy community, when you first started out?
Shantel: "As always in life, there were positive reactions and there were critics. That was only to be expected. Over the years though I've been pleasantly surprised to see an album like 'Disko Partizani' go to the top of the charts as well  in countries like Turkey and Greece. This music is very energetic and it's creating a dynamic that is being felt in the East as well as in the West."

You're often quoted as saying you don't want to deal with nationalities, but with Eastern European music being so diverse, isn't there a risk that all of that will disappear into one unidentifiable mix?
Shantel: "No, I believe it's just the opposite. Some people come up to me saying: "This is not original, you're destroying the authenticity of the culture!", but when you go and research the music culture of Eastern Europe, you will find a lot of influences and you will see them pop op in various countries. This is in part a legacy of the big Ottoman empire, which stretched out over most of that area, but there are also influences of Greek music, Jewish Klezmer and even Viennese waltzes to be found in that music. So gypsy music is already hybrid music to begin with. That's why I say this music is not about nationalities. I don't just want to represent one certain country, but a whole spirit and that's the spirit of Bucovina."

Do you consider yourself a frame of reference for people in search of a deeper understanding of this music?
Shantel: "That depends. I don't necessarily want to educate people; music should primarily be about enjoying oneself and about spreading positive vibes... and also about stopping time in a way and creating a synergy between people from all kinds of different backgrounds and nationalities. I truly believe the success this music is starting to have now is in its own way opening the minds of people to a whole other kind of music than the one they're used to."