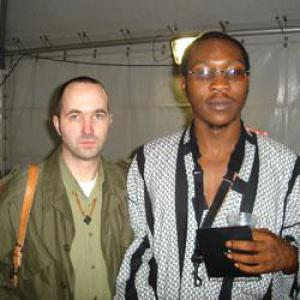 Dressed in the same tight-fitting suits his father wore back in the seventies and backed by the Egypt 80 band, Seun Kuti is the spitting image of Fela! Of course that can be a blessing as well as a curse, but Fela's youngest son carries his inheritance well. We met up with him after a steaming concert at Festival Mundial in Tilburg.

Seun, let me start off with the most obvious of questions. What can you tell us about the music you play?
Seun Kuti: "I play afrobeat and if you were to ask me: "What is afrobeat?" I would tell you afrobeat is more than a genre of music, it's a movement that was created for the emancipation of the black race. Musically speaking it's a mixture of old African rhythms with influences from funk and jazz."

More than any other type of African music, afrobeat is a revolutionary music, a social music too. Is that something typically Nigerian?
Seun Kuti: "No, I don't think it's typically Nigerian, it's something that is felt throughout the African continent. Ivory Coast has Tiken Jah Fakoly and Senegal has Youssou N'Dour, who, both in their own way, are spreading their revolutionary message as well. That being said, afrobeat is the only genre that was created with that revolutionary spirit in mind. There's one song on my album called 'Fire Dance', which is more about dancing than about the message, but honestly with everything that's going on in Africa, I can't see myself singing about love and happiness."

One can hardly read an article about afrobeat without seeing the name of James Brown pop up left or right. How influential has he been in the development of the afrobeat sound?
Seun Kuti: "I think I would have to say it has to be about 50/50 between him and my father. They both influenced each other. When you read a biography about James Brown my father will probably be mentioned and vice versa."

Being the son of that legendary cult figure in afrobeat, Fela Anikulapo Kuti, how do you remember your father on a personal level?
Seun Kuti: "My dad wasn't a father in the strictest sense of the word. He didn't believe in ordering his kids around, but was convinced we could make our own decisions. I guess I remember him as a sort of best friend really."

I see you holding a spliff, something I believe your father was also very partial towards.
Seun Kuti: "Well, we Kutis are fond of everything that's natural! (laughs) I'm in Holland, so I can even say spliff in an interview; the world should catch up to this place!"

Your father was also, in his own unique way, politically active. At one stage he even founded his own private republic (Kalakuta Republic was the name musician and political activist Fela Kuti gave to the communal compound that housed his family, band members, and recording studio. Located at 14 Agege Motor Road, Idi-Oro, Mushin, Lagos, Nigeria it had a free health clinic, and recording facility. Fela declared it independent from the Nigerian government after he returned from the United States in 1970, red.). Where do you stand on these philosophies?
Seun Kuti: "I believe in the fundamental equality of all men, but even in the animal kingdom, there are certain hierarchies. I still believe we need leaders. The problem in Africa is we don't have leaders, we only have rulers, the difference being that a leader cares for his people and a ruler scares his people!"

We can now also finally enjoy your debut album 'Many Things', an important step in your career?
Seun Kuti: "On a commercial level every artist wants to see his music spread across the world, so yes I have to admit releasing the album was a milestone."

One of the songs on the album, 'Mosquito Song', talks about the problems Africa is having in the fight against malaria. I know you also joined Youssou N'Dour a while ago when he launched his big malaria appeal (The fist-ever Roll Back Malaria Concert took place at the Iba Mar Diop Stadium in Dakar, Senegal on 12-13 March 2005 to support the Roll Back Malaria partnership. The concert aimed to increase public awareness of the disease and understanding of prevention strategies, leading to more protection and better treatment for malaria. During two days, this event featured African and International artists in order to use the music as a powerful tool for communicating vital information about malaria, red.). Do you think it's a problem we might be underestimating here in the west? All we seem to talk about where Africa is concerned is AIDS.
Seun Kuti: "Exactly! Everybody's talking about AIDS because it's an easy way to get money from the west, but malaria is killing much more people and the disease does it in a fraction of the time as well! Every thirty minutes Africa loses 3000 (!) children to malaria, so I see it as a much more urgent problem, especially when you know it can be cured by a 3 dollar drug!"

To conclude, could you summarize in a few short words, who this guy called Seun Kuti is?
Seun Kuti: "In just a couple of words? A very different guy! (laughs)"