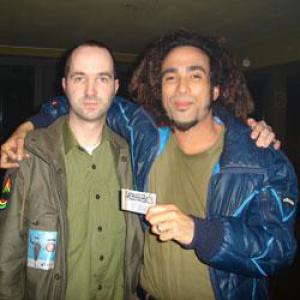 Sebastian Sturm is one of Germany's newest faces on the roots reggae scene. We caught up with him at the AB in Brussels where he was playing with Groundation.

Sebastian, the little I know about Sebastian Sturm is that he's an upcoming German roots reggae artist with Indonesian roots. What else can you tell us about yourself?
Sebastian Sturm: "I'm from Aix-la-Chapelle close to the border with Belgium and the Netherlands. Musically speaking I started performing with the Jin Jin band two years ago and released my debut album, 'This Change Is Nice' the same year. Thus far we've mainly toured in Germany, but this year we want to try and conquer the rest of Europe."

Apparently you didn't even start out in reggae music, but rather in the punk scene.
Sebastian Sturm: "Yes, when I was about fifteen years old, I started to play the guitar and listened to bands like NOFX and Pennywise. I played in a few punk bands - I won't even mention the names because it never went too far - but then I started listening to the music of Bob Marley. At first that mainly changed my singing style; before I was always screaming but now I really started to sing. I then decided to take it a step further and formed my first reggae band, Jogit Beat, in 2000. We lasted about four years. The Jin Jin band had been around in Germany for years and as it happened they were just looking for a new singer when Jogit Beat disbanded."

Even the Jin Jin band is not that well-known here in Belgium, so could you tell us a bit more about them as well?
Sebastian Sturm: "They're one of the oldest roots reggae bands in Germany. All the members in the band are about ten years older than me, so when they first asked me to become their lead vocalist, I was a little hesitant. We did a small try-out session anyway, playing only Bob Marley tunes, and I noticed immediately that these guys were as fond of the old-school roots reggae stuff as I was, so I decided to give it a shot and here we are."

You've got that classic dreadlocked reggae look and you sing roots reggae, but listening to the album I didn't find any references to Rastafari.
Sebastian Sturm: "Well, when I started out playing reggae, my knowledge of the music and its history and culture were very limited. In the mean time I've learned more about it, but I still don't see myself as a Rastafarian teacher or preacher. I also want to be as authentic as possible and try to keep my music universal. I'm just a little German guy from Aix-la-Chapelle, so what can I say about Rastafari? I also think it's very hard if not to say impossible to live a truly Rastafarian lifestyle in Europe. For me it's important to be tolerant and not to spread evil messages; it's all about love and having fun. That's also the reason why I couldn't find myself in the punk scene anymore; there was too much anger and frustration going around in that scene. Reggae was a way for me to express different feelings."

The only cover version on the album, 'Social Living', is a Burning Spear song. Why exactly did you want to cover just that song?
Sebastian Sturm: "The reggae music I really love is the minimalistic kind Burning Spear excels at. On 'Social Living', with just a few lines, he manages to fill the entire song. You don't need more than that. The modern dancehall with singjays rapping to the riddims is not my thing. Another reason is that the members of the Jin Jin band already knew how to play this particular song, so we didn't have to study the arrangements anymore and could record it straight away."

In 'Tell Them The Truth', you kind of fulminate against the educational system in Germany. Did you draw on your own school experiences for the song?
Sebastian Sturm: "To be honest, I visited quite a number of schools and changed often, but I never finished anything. (laughs) A lot of times when I was in class I was wondering about the purpose or the practicality of what they were teaching me. A lot of what you learn there has no use in later life and that was very frustrating for me. I really felt I was wasting my time. If you are a clever person, school is no problem; you just finish your exams at the end of the year and go on to the next one until you get your degree, but if you're just an average student, that system becomes a lot harder to deal with. There are many youths that just can't handle that pressure and drop out. I was lucky that I still had my music."

To conclude, could you summarize in a few words who Sebastian Sturm is and what he stands for?
Sebastian Sturm: "My music is about life and being from Germany and not Jamaica, my version of roots reggae is slightly different."