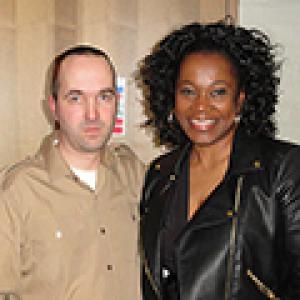 Sandra, your career started quite peculiarly, with you scoring a number one hit with 'I Adore You', but at the same time being cooped up in some kind of institution.
Sandra Cross: "(laughs) Yeah, I was fourteen years old at the time and my parents had sent me to an institute for wayward children, truants and what have you. I was only there for a couple of weeks though. All I was interested in was writings songs and making music and I guess I started to worry my parents at one point. I just used my time at that institute to write more songs. (laughs) I always sang along in church, but everyone sang in church, so that wasn't really a big deal for me. When I noticed my voice was also appreciated in the world outside of the church, things changed, though. I started hanging out with a sound system in my neighborhood, but being so young, the only way I could go to the dances they were playing at - we still called it blues dances at the time - was sneaking out of the window without my parents noticing. To me it was all one big adventure."

Do you think you being the only girl in a family of boys, made your parents treat you a bit stricter than they did your brothers?
Sandra Cross: "That might have been the case, yes, but I was a tomboy and did most things my brothers were doing. Apart from that there was also a religious part to it, as my parents were strong churchgoers like many West-Indians of their generation."

You went on to become one of the queens of lovers rock, scoring a big part of your hits working with Mad Professor. How instrumental has his input been in the whole lovers rock genre?
Sandra Cross: "When I met Mad Professor he was still a freshman in the business, but from the get-go he was his unique self, a producer who loved to experiment with all ranges of reggae music. He's exactly what his name says he is, really: a mad professor! (laughs) It was as if he treated music as if it were chemistry, whereas the other producers I had worked with had a much more straightforward way of working."

One of your biggest hits you recorded with Mad Professor, 'Country Living', was a Mighty Diamonds original. Who came up with the idea to do a version of that song?
Sandra Cross: "It was Mad Professor who introduced me to that track, but to be honest at the time I didn't really understand why he wanted me to do a version of a roots track. Basically, I went in, voiced the track and then totally forgot about it again. About two weeks later the song was being played everywhere."

I think we can honestly say it's one of those songs where the cover version has surpassed the original in success. Have the members of Mighty Diamonds ever shared how they felt about your version?
Sandra Cross: "I would love to meet them but somehow our paths haven't crossed yet. I'm a big fan of Mighty Diamonds, they were one of the bands that really inspired me when I was younger and for the longest time on of their albums used to be on my bedside table. Maybe it was no accident I came to do a version of one of their songs years later."

At one point you decided to take a break from doing music and retreated to Barbados for a while. It was there that you got a visit from Florida-based producer Lloyd Campbell (Joe Fraser Records, red.).
Sandra Cross: "When he came to see me, he immediately cut to the chase and told me he wanted to record an album with me. He kind of caught me at a moment when I was quite fragile as a lot of things were happening in my life, but it turned out to be the perfect time as I was bursting with emotions I could turn into song lyrics. The tracks were recorded between Barbados and the UK and the album did very well in the United States.

From a financial point of view, it might have been easier for you to do other genres of music. Have you never contemplated doing soul or r&b?
Sandra Cross: "I've considered doing that yes, just as I imagine many of my colleagues did, but then again, is that what Beres Hammond did? We have to change with the times, but I don't think an artist should necessarily switch to a whole other genre of music. Maxi Priest has always continued singing reggae and he eventually made it into the pop charts. There's a lot of luck involved and in all honesty, that's not really fair, because we work very hard! I'm not giving up though, because I love what I do!"