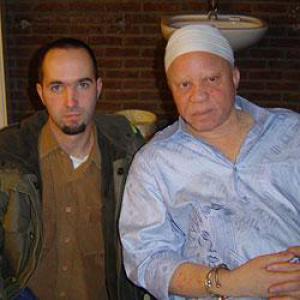 Salif, dance is very important in African culture. How do you feel about performing in front of a seated audience like here tonight?
Salif Keita: "It makes me want to try even harder to get the people dancing. Wherever I go, I have to get the people to dance because African music is made for dancing. Dancing comes natural to us. Whatever the occasion, Africans will dance. Our music also wants people to reflect on certain issues, it's music with a message, but it's still music to dance to."

Your latest album, 'M'Bemba', was in part recorded in your new studio in Mali. Was that a dream come true?
Salif Keita: "Absolutely! I spend a lot of time abroad, but I felt the time was right to do something in and for Mali now. I'm very happy I've built that studio, because it's not only there for my benefit, but for all the young Malian musicians looking to forward their careers."

You're one of the most well-known Malian artists, but these days you've got serious competition from people like Habib Koite or Oumou Sangare. Like them, you perform all over the planet. In your opinion, what makes Malian music so easy to identify with?
Salif Keita: "Like all other African music styles, Malian music is a very natural and very pure kind of music, and, because of all the different ethnicities and cultures living together, it's also nearly inexhaustible. Malian culture is very rich and stems from a century-old civilization. People can easily relate to natural things because they themselves are part of nature."

Translated to English, the title of the album, 'M'Bemba', means "forefather". One of your forefathers was one of the greatest figures in Malian history. I'm of course referring to the legendary Sundiata Keita who founded the Mandingo Empire. What does being a Keita still mean in today's Mali?
Salif Keita: "Mali has now become a democracy, so the name Keita is now mostly a reflection of our past history and culture."

The Keita were part of the caste of the noblemen; a caste that came with certain limitations: becoming a musician was not really a viable option for a Keita. For westerners the Malian caste system, which is similar to the Indian one, might seem a little strange. Can you explain in short how this system worked?
Salif Keita: "It was a kind of traditional democracy developed by Sundiata Keita to put an end to the various wars that were going on. To establish a balanced and peaceful society, he allocated each ethnicity a specialized task; one tribe was assigned music, another arts and crafts and another still were assigned military duties, and so on. By doing this he eradicated all discrimination and created harmony between all the different tribes in the Mandingo Empire and this already in the 13th century!"

Remarkably almost all of Mali's neighboring countries have had a war-torn history.
Salif Keita: "Ever since the 13th century, Mali has been a nation of peace and with the help of Allah it will hopefully remain that way."

When you did the 'Moffou' album, you also released a version with remixes of the same songs done by various artists. What inspired you to do that?
Salif Keita: "Well, making music these days means people are going to use and sample it anyway, so why not be part of that? Doing these remixes makes my music accessible to a whole new public and that's what every artist wants, no? I was really happy with that album."

This summer Bob Geldof organized his big Live 8 event. A lot of people supported the event because it focused on Africa, but critics claimed an event focusing on Africa should have featured more African artists.
Salif Keita: "(cynically) Right, but Africans are animals incapable of talking, so white people have to take their place, isn't it? It was yet another example of a big event in aid of Africa without including Africans!"

A great obstacle you've had to conquer in your life was the fact that you were born albino, a white black man so to speak. What does being born in Africa with that condition mean?
Salif Keita: "It depends a lot on local cultures and traditions, but in general we're exposed to a lot of violence and discrimination, all making life very difficult. Having this condition in Africa is not easy."

That's probably the reason why you decided to establish your own charitable organization called S.O.S. Albino. What exactly does it do?
Salif Keita: "With this organization we try to integrate albinos in society and there's also the fact that albinos are highly susceptible to skin cancer. The organization focuses on teaching albinos to reduce risk factors, thus guaranteeing them a longer and more normal life."