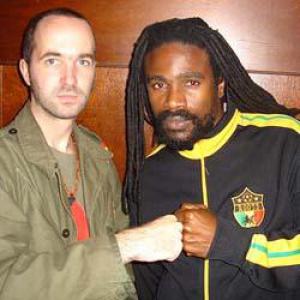 Ryan, you were just explaining how you are very versatile in the field of music.
Ryan: "(laughs) Yeah man. My whole existence is music. I was born in it, I grew up in it and now I'm living of it. I work with more established artists like Glen Washington, Michael Rose and the re-united Black Uhuru and I also work with spoken word artist Mutabaruka. It's especially great to work with Mutabaruka, because he represents a different element in music, where people can listen to the words and be inspired or maybe even get a little uncomfortable. When I say uncomfortable, I mean you might sometimes hear a point of view that might offend you or cause you to think or even re-examine your values."

Is it something you are involved in on a practical level as well? Do you write poetry yourself?
Ryan: "Well, my music really derives from poems, so I suppose I can be considered a poet in some way.  The words are always first and then a melody comes to me and they are transformed into a song."

Can we expect you to release an album soon?
Ryan: "My fans can always check the Special Delivery website (www.specialdeliverymusic.com, red.) for my singles that were released on that label. My latest one is called 'Arise' and it's featured on a compilation album called 'This Ya Time'. As I said it's on Special Delivery, which is a label based in France that is doing a lot of great work. They're instrumental in providing a voice to lesser-known artists."

You are based in Canada but you have become very close with the guys from Basement Sound here in Belgium. How did you hook up exactly?
Ryan: "I met Organiza (born Sven Reliszko, red.) at a rehearsal in Toronto. I was preparing for a show I was doing with Morgan Heritage and from there everything started. This music travels you know. Reggae music is a music that came from struggle and that struggle is universal, it's not bound to one area. So it comes as no surprise at all to me to hook up with people from all over the world. People who can feel the music can feel the message."

You've performed in this country a couple of times now. How did you experience your Belgian fans?
Ryan: "They have been great. I've received a lot of e-mails and pictures. We played at Petrol with Culture, and I was really overwhelmed with the response I got just from that one concert. Especially from the female fans! (laughs) Belgium will always be a special place for me. I've enjoyed my time here, but I wish I could understand a bit more of the language. However I don't let it be a barrier to relate with the people."

What did it feel like to have played on the same stage, on the same night as Joseph Culture Hill's last ever performance?
Ryan: "For me and for the world it is a great loss, but at the same time we're left with such a great legacy of music. If we, as rising stars in the reggae music industry, continue to do our work, the memory of Culture and his legacy will continue to live on. I really didn't see any physical evidence that he was ill that night and I also couldn't tell from his performance, because he really gave his all at Petrol. I feel enormously blessed that I was able to play on the same stage as such a legend. I'll make it a point to include at least one of his songs in my repertoire each concert I do from now on."

Respect!
Ryan: "Yeah man, he was a big legend you know. At least he started to get some of his accolades before he died, so at least he realised that the people loved him."

What astonishes me is that a lot of these elder Jamaican artists seem to keep playing until they literally drop dead. The same thing happened with Justin Hinds last year.
Ryan: "Well, it's not necessarily a negative thing. They are enjoying their lives. Suppose you have grown up with a philosophy or an idea and by spreading that idea to other people you can make a living and feed your family. What better job than that is there? That is enjoyment! The audience empowers the artist and vice versa, so I'm sure that if you were to ask any of these guys how they would like to die, they would answer: "Doing the thing I love most!" and that is playing reggae music and spreading the word of Rastafari. Speaking for myself, I can say there's no greater feeling than when I'm on stage sharing my ideas and feelings with an audience. There's no greater high than that! I remember listening to an interview once, I forget which artist it was, but at one stage he said: "I have the best no-job in the world!""