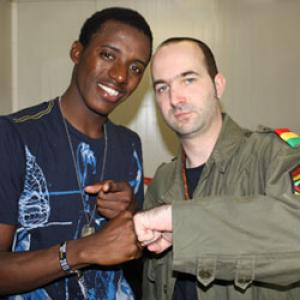 Romain, you first burst on the scene when you won the Digicel Rising Stars Talent Contest in 2007, but what had you been up to musically speaking before that time?
Romain Virgo: "In high school I was the lead vocalist of the school choir. There's a school choir talent contest in Jamaica very similar to Digicel Rising Stars, that's shown on national television in which we gained second place. Before that, as so many Jamaicans, I used to sing in church."

Talent contest aren't new in Jamaica, they've been around for decades. In your view what does Digicel Rising Stars offer that the other talent shows didn't?
Romain Virgo: "Well, for starters it goes out on national television, so it has a very wide audience. It's one of the programs on Jamaican television people really look out for from week to week, so for prospective artists it's a very easy way to reach a very large audience; in one performance the whole of the island knows who you are."

For your debut album you teamed up with producer Donovan Germain of Penthouse Records. Was this collaboration part of the prize package you won or how did that happen?
Romain Virgo: "I kind of have to give thanks to Tony Rebel for that, because he was the one who initially told Donovan about me. Donovan Germain is not the type of producer, who would be sucked in by the hype of the week, but he recognized my talent and I want to thank him for giving me the chance to voice on some of his classic riddims."

I don't think your voice really asks for it, but on your album there's one track ('Love Doctor', red.) for which you chose to use auto-tune anyway. What's your personal opinion about that gimmick?
Romain Virgo: "It's not something I would like to use regularly, because I prefer people to hear my natural voice, but there's no way around the fact that it's an in thing at the moment, so we have to cater to that part of the audience as well. As I said though, I try to keep it to a minimum. It's the same thing with computerized riddims; I much more prefer live riddims that really make you feel the bass."

Being an upcoming young artist, do you feel you're an exception there or do you think the Jamaican music scene as a whole is returning to these more traditional values?
Romain Virgo: "Musically speaking Jamaica is loosing what it's most famous for in a fast way; a lot of the riddims coming out these days are more r&b then reggae inclined. At the same times there's a few young upcoming artists, people like Protoje or Christopher Martin that can make a difference. We have to try to return to the days when musicians were still helping each other out instead of trying to be the big man all the time. One thing is for sure though, reggae music will never die!"

At the time when you entered the Digicel Rising Stars talent contest you were still at school. What were you studying exactly and did you finish?
Romain Virgo: "I'm still attending school at Edna Manley College actually and to be honest balancing school and a music career can be rough at times; it's certainly not easy. I miss out on classes all the time, but at this moment my musical career is really demanding my attention. I can always return to school, but if I don't pay attention to my music career that side of things could be over in a flash. I'm studying music at college, so it's not that I'm throwing away a career or something. I firmly believe that if you want to reach the top, you'll have to put in a lot of work and that's exactly what I intend to do."

On your album there's a track called ‘No Money', but winning the Digicel Rising Stars competition did land you with a substantial sum of prize winnings. What did you spend the money on?
Romain Virgo: "The bulk of that money was used to pay for my school tuitions. I always dreamed of being able to go to Edna Manley College and winning Digicel Rising Stars helped me achieve that goal. School is very important and I would advise anyone to get a degree and more importantly maybe to get an education. The only thing you have to do is believe in yourself, work hard and leave the rest to God. In everything I do, I put God first."