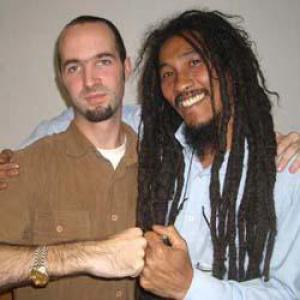 As is the case for so many Jamaican artists, Rohan Lee's career has been one with lots of ups and downs; a career that through time has become undeniably linked with Belgium.

Rohan, you arrived back in Europe just days after one of the worst natural disasters of the last years hit the Caribbean. How did you and you family get through the beatings of hurricane Ivan?
Rohan Lee: "Well, I live in a concrete house with secured windows so I didn't have to worry so much. But I was worried for my mother and other family members. It only gets a bit scary at night when the electricity is out. Then we all usually sit together around the table a bit to face the worst. But in the end it wasn't that bad cause the eye of the storm shifted and only hit the southwest coast of the island."

You're back after an absence of three years, what are your plans for the near future?
Rohan Lee: "I just live each day as it comes. Sure I want to put certain things into place and I know I've got a lot of people that know me over here, a lot of fans. What the business side is concerned, because that is also connected to everything, I would like to record a new album."

Did you write a lot of new songs?
Rohan Lee: "Yeah, there's a lot of new material ready. Every day different new things happen and with that, inspiration comes naturally."

When you returned to Jamaica last time, you returned in lots of strife & tribulation. Has that changed your attitude towards Europe or the way you face things over here?
Rohan Lee: "No, I haven't changed; I've stayed the same, with love in my heart. I love people and I love my friends. Things like what happened break my heart, but I don't want to be angry. Sometimes things come at a price and you lose a friend."

Recently an article was published in The Gleaner stating that a number of big companies that sponsor musical events in Jamaica were considering pulling out if the incitement to violence stayed so apparent in dancehall music. As a conscious artist what are your comments on this issue?
Rohan Lee: "I think it's a form of hypocrisy, because the people who decide which music will be played are still the fans. It's the public that makes the artist. If the public don't support you, you mean nothing as an artist. And you have different kinds of music. There are artists and there are artists. You have music for entertainment and conscious music. Some artists will do almost anything to get the attention of the crowd. I remember an edition of the Sting festival where a host of dancehall stars were appearing, but which also had Bunny Wailer on stage. When he came on, the people didn't even want to hear him and booed him off the stage. All they wanted to see were some clashing dancehall stars. So you see it's always the people who decide. You know the dancehall scene is fleeting with gun talk; it's a rude boy thing where men want or have to prove themselves. Dancehall is a rough thing, so you can't really come up and start singing soft things. It's very rare that you see a dancehall artist turn himself around to start singing conscious music."

How did you get involved with Rastafari and what does it represent in your life?
Rohan Lee: "Well first of all you are born Rastafari. Everybody is Rastafari. But some discover it early, some discover it late and some never discover it at all.  H.I.M. came to me in a vision, like in a trance. I don't follow other people or listen to what they tell me I should do. It came as a revelation to me that this was the way I was supposed to be. Rastafari means having the highest regards for moral, natural law and people; finding a discipline within oneself and becoming aware of your environment both morally and spiritually. And it's having a very special relationship with H.I.M."

As a rastaman, is it your plan to visit Ethiopia one day?
Rohan Lee: "I want to live in Ethiopia because it is the country of His Imperial Majesty. His presence is everywhere over there. I want to go and live there in unity and love with the local people and give my contribution teaching my crafts and learning theirs. I would like to invest in Ethiopia, but not like a lot of merchants who go there just to take advantage of the country. Ethiopia still needs so much; things like decent roads and waterworks. As does Jamaica for that matter, cause over there too there are still a lot of people with hungry bellies."

In conclusion, what message do you want to leave the readers of this interview with?
Rohan Lee: "After being away for three years it's very nice to see that new things are happening. Big up to you for doing this interview and still endorsing me as an artist and the highest regard for the people reading it."