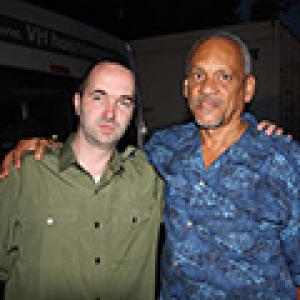 Robbie, you're one of a few iconic keyboard/piano players in Jamaican musical history. Your mother also having been a pianist, would you say you were predestined for this career?
Robbie Lyn: "That probably played a role, yes, although I have to say that I was more influenced by my friends and peers in the neighborhood where I grew up. In that time almost everybody you met was talking about starting a career in music, be it as a singer or a musician. I was just fortunate enough to have a mother who was a professional piano player, so I had a piano at home to practice on."

Professionally speaking, where did it all start for you?
Robbie Lyn: "I used to be a member of a band that went through some name changes but eventually became known as The In Crowd (The In Crowd were a popular Jamaican reggae show band of the late 1970s. Led by Fil Callender, who did vocals and played lead guitar; the band also included Errol Walker on lead vocals, Clevie Browne on drums and vocals, Tony Lewis on bass guitar and vocals, Freddie Butler on keyboards and Wigmore Francis on guitar, the band also featured a horn section of Egbert Evans and Barry Bailey, red.)."

How did you get from being a musician playing in band that was performing the club circuit in Jamaica to becoming as session musician at Studio 1?
Robbie Lyn: "One of the guys I grew up with was Phil Calendar (see The In Crowd, red.) and apart from being a founding member of The In Crowd, he also worked as a session musician at Studio 1 as did Erick Frater the guitarist in the band. At a certain moment, we were asked to do a promotional two month tour for a cigarette brand called Swing Kings (also involving Ken Boothe, red.) and almost all the musicians in that band - Phil Calendar, Erick Frater, Leroy Sibbles and Deadly Headly - were seasoned Studio 1 musicians. Jackie Mittoo, who was the main man at Studio 1, had left Jamaica and migrated to Canada, so there was kind of a vacancy for a keyboard player and I guess I fitted that slot perfectly having already played with most of the other musicians."

Filling the void that Jackie Mittoo left mustn't have been an easy thing to do. How did you look at the task before you at the time?
Robbie Lyn: "Well, in reality it took two of us to fill his shoes. (laughs) Richard Ace played the organ and he had a style that was pretty similar to that of Jackie Mittoo and I just had to do the piano parts. I always idolized Jackie Mittoo and in the beginning I still tried to copy his style because I thought that was what Studio 1 was expecting me to do, but eventually you have to evolve as a musician so I developed my own sound."

At which point in your career did you get your nickname 'Tights'?
Robbie Lyn: "I think the first person that called me that way was Geoffrey Chung. Dermot Hussey, a radio journalist picked up on it and liked the name and he's more or less been the only one who kept calling me 'Tights' over the years, as it has never been a nickname that really stuck as so often happens in Jamaica."

You spent an important part of your career working with Peter Tosh. How exactly did you become a member of his band (Word, Sound And Power, red.)?
Robbie Lyn: "Peter Tosh's manager at the time was a guy called Herbie Miller who lived quite close to where I was living. After 'Legalize It' and 'Equal Rights', the first two records he did for Colombia Records, Peter became more serious about forming his own band, so Herbie just came over one day and asked how I felt about joining. I had just quit playing with The In-Crowd at that time, so for me his invitation came at exactly the right moment."

Peter had the reputation of having a somewhat difficult character. Is that a reputation he deserved?
Robbie Lyn: "Peter had a bit of a dual personality; one moment he could be a quiet soft spoken individual, but the next he could make the whole room look or listen at him. Personally speaking, I've never had problems with Peter; band leaders can sometimes be quite demanding, but never did I see Peter trying to act superior or dominant towards us. In that aspect he was quite easy to work with really."

It was also in that same period that you developed what has become a very longstanding relationship with Sly & Robbie. How important has that duo been in your career?
Robbie Lyn: "Very important! A lot of the studio work I did, I got thanks to Sly & Robbie. They were called upon - and still are - by artists from all over the world who want to work with them and because we became quite close when we were in Peter's band, they still call on me most of the time. We're not just musical acquaintances either; I would call them good friends.

I shouldn't forget to mention the work you did for Donovan Germain's Penthouse Records. How did that relationship come about?
Robbie Lyn: "I had already done some work with Donovan before he had his Penthouse studio, mostly at Dynamic Studio. I used to work for Gussie Clarke and he also kind of introduced Donovan Germain into the music business, so when Donovan took things to the next level and needed musicians to work with, he called upon the people he already knew from when he was still with Gussie Clarke. I can't take all the credit for the Penthouse sound though, because when I was working there you also had Steely & Clevie and the Firehouse Band doing their thing there. I still work with Donovan quite regularly."

It took until 2007 for you to release your very first solo album ('Making Notes', Island Treasure Music, red.). Why did it take that long?
Robbie Lyn: "I was never really sure if I wanted to do a solo album and the way the recording business has been struggling the past few years wasn't that inspiring either. People kept asking me about it though, so finally I decided to go ahead and do it. I collaborated with Glen Browne and his input on the album shouldn't be underestimated."