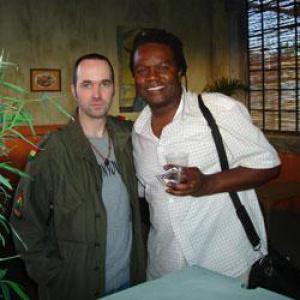 Ricardo, how does a Congolese with Angolan roots end up living in Los Angeles?
Ricardo Lemvo: "(laughs) I went to Los Angeles in 1972 to continue my studies and I'm still there. In 1990 I started Macina Loca, a band playing what is generally called Afro-Cuban music, a mix of Cuban, Congolese and Angolan rhythms."

Los Angeles has a large Latino community predominantly of Mexican descent, the so-called Chicanos; did their music also influence you in any way?
Ricardo Lemvo: "Not really, no, my musical roots are to be found both in the Congo and in Cuba. If you would ask me to drop some names, I would name people like Benny More, Orquesta Aragon, Chappottin (Conjunto Chappottin is a Cuban son band from Havana that has been around for over 50 years and is at present being lead by trumpeter, composer and arranger Chappottin Coto and percussionist Miguel Cuni Jr. The band was started by Arsenio Rodriguez, a man with great fame in Cuba, red.), Abelardo Barrosso (1905 - 1972, Cuban composer whose career enjoyed a boom during the fifties. He started out as a driver for Sexteto Habanero, a group he would later join as a musician himself, but the height of his success were the years he spent with Orquesta Sencacion, red.) and in Africa Sam Mangwana, Bonga, Grand Kalle et L'African Jazz (Joseph Kabasele Tsamala, 1930 - 1983, is still considered to be the father of modern Congolese music. He's well-known for the work he did with the African rumba band L'African Jazz; a band that, with people like Manu Dibango, Dr. Nico, Tabu Ley Rochereau and Pepe Kalle, counted some of the most legendary African musicians as its members, red.), Franco et TPOK Jazz and Tabu Ley Rochereau."

You just mentioned Sam Mangwana there. He's someone who helped to give your career the boost it needed no?
Ricardo Lemvo: "As they say in Spanish: "Sam Mangwana es mi padrino!", he's my godfather, my friend and a true brother! I really appreciate what he has done for me and I'm eternally in his debt."

Los Angeles equals Hollywood and you already ventured into the world of film playing a small part in the movie "Dance With Me" (Randa Haines, 1998, red.).
Ricardo Lemvo: "Yeah, alongside Vanessa Williams; an experience I wouldn't mind repeating."

You were born in Kinshasa in the Congo, what remains of your Angolan roots?
Ricardo Lemvo: "Part of my family still live in Angola, others in the Congo and some even here in Belgium, but above all else Africa has a spiritual significance for me; the continent is my main source of inspiration."

Do you still return there often?
Ricardo Lemvo: "Absolutely! I often travel to Angola, but once every so often I also try to visit the Congo."

In your biography on the Macina Loca website it reads: "Lemvo loves Californian wine, yoga, Thai food, Starbucks coffee and the music of Charles Aznavour." That last name was somewhat surprising.
Ricardo Lemvo: "To me Charles Aznavour is the greatest singer of the twentieth century. Every time I hear his music, he manages to transport me to far-off places."

In conclusion, is it true you don't really like the word "salsa"?
Ricardo Lemvo: "Salsa is a sauce! (laughs) The music we do is in great part inspired by the Cuban son montuno. Salsa was invented in New York and is really nothing more than an American copy of Cuban music."