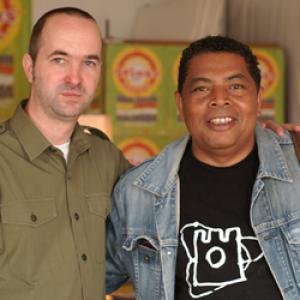 Régis, you're undoubtedly Madagascar's most well-known accordionist, but how exactly did you end up playing that instrument?
Régis Gizavo: "To be honest, it was almost by accident really. At one point my father bought a small diatonic accordion, but since we were a family of thirteen children, we all had to share the instrument. In the beginning it was nothing more than a toy to me and I guess my siblings looked upon it in a similar way. As a logical consequence the fragile instrument only survived for a year or two, but when one of my older brothers got his high school degree, my father bought him a chromatic accordion and I started to use that instrument to practice on as well. When I finished high school myself, I travelled to the capital Antananarivo where I recorded my very first songs in a recording studio. Somehow the Malagasy media must have gotten wind an accordion playing boy from Toliara had arrived in the capital and they decided to do a small feature on me. When that aired, all of a sudden the whole of Madagascar knew who I was! Two years later I entered the Prix Découvertes talent contest organized by Radio France Internationale and to my surprise I even won! This meant I had to travel to Paris for the award ceremony. In France I met a lot of locally based musicians and used the prize money to buy the very first accordion of my own. I returned to Madagascar, but not even a year later I was already invited to return to France to play at the Francofolies festival in La Rochelle. When I arrived back in Paris, one of the musicians I had met during my previous visit, a drummer called Francis Lassus, asked me if I'd consider staying in France to join him in a music project. Mentally speaking I wasn't quite ready to take that step at that moment, but I decided to take the plunge anyway. Together with musicians like Sally Nyolo, David Mirando, Richard Bona and Jean-Michel Pilc we put together a band called Bohé Combo, but unfortunately this collaboration never resulted in an album. Not much later I was contacted by the members of the Corsican band I Muvrini and I ended up playing with them for close to ten years.  In the mean time I had also already recorded my first solo album, 'Mikea', in 1995, followed by a second one in 2000 ('Samy Olombelo', Indigo/Harmonia Mundi). What I like to do most, though, is playing with a variety of artists from diverse backgrounds; I've worked with Cesaria Evora, Fernando Lameirinhas and even Stef Bos from The Netherlands!"

At the moment you're working with Lala Njava.
Régis Gizavo: "That collaboration is slightly different because Lala is also Malagasy and her music really reminds me of home. When we're playing together it's like being among family, even though we're not really related. Apart from that, it's also an excellent opportunity to promote Malagasy music."

What's behind the title of your new album 'Ilakake'?
Régis Gizavo: "Ilakake (Ilakaka, red.) is a place on the route nationale n°7, which runs between Antananarivo and Toliara. It used to be a small village of no more than twenty shacks, but when sapphire was discovered in Madagascar, almost overnight it grew to a city of several ten thousands of inhabitants, bringing with it a lot of crime and violence. With this album I'm pondering on where this industry will lead my country."

As a musician you now enjoy worldwide recognition. Have you never contemplated using your popularity to weigh on the political system in Madagascar?
Régis Gizavo: "A couple of years ago, together with a number of Malagasy colleagues (Dama, Erick Manana, Fenoamby and Justin Vali, red.) we put together the Madagascar All Stars. The idea behind this all-star band was to present ourselves as a united front. The band doesn't exactly have political ambitions, but we try to put forward a positive image of our country; something the Malagasy politicians don't seem to succeed in doing. I really hope Madagascar All Stars can make a small contribution to the advancement of our country. I don't believe that is something I would have been able to do by myself; union is strength!"

Is it easy to get your hands on an accordion in Madagascar?
Régis Gizavo: "It's above all else a very expensive instrument, so most Malagasy won't be able to afford buying one. Recently a French non-governmental organization (Bretelles Du Monde, red.) has started distributing second hand instruments and, more importantly, has also started to teach Malagasy youths to clean and repair their instruments. If we want to maintain the Malagasy music tradition this is something of the utmost importance! The cynical reality is that Malagasy woods are used on a worldwide scale in the fabrication of musical instruments, but at the same time the Malagasy are not only confronted with a deforested nation, but also can't even afford to buy these instruments!"