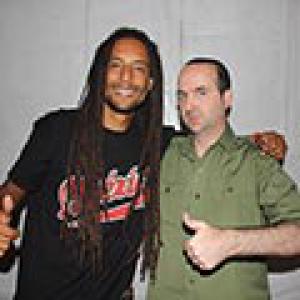 Raphael, you were born in Savona, Italy. What can you tell us about that place?
Raphael: "Savona is a small town near Genova in the Liguria region of Italy, a stretch of land perched between the sea and the mountains. It's a beautiful place, but the people there are a little reserved. When I grew up there, I think there were no more than two or three mixed families living in town. I've moved though, and these days I live in Genova, but I still love to return there every so often."

Growing up in a small town in Italy, how did you stumble on reggae music?
Raphael: "When I grew up there was already this band called Africa Unite, which is still around today and who have been a huge inspiration to me. Back then in Italy you could only find reggae in the bigger cities, but being small town youths this only made us more determined to go in search of our favorite music. That being said, we did have a cool club in Savona called Ju-Bamboo, where a lot of reggae was played, mostly on Fridays. I also still remember the days when you still had to connect to the internet with a phone modem. The whole thing was still quite expensive back then, so we used to write down everything we wanted to search before we connected, so we could find it as quickly as possible in the time we had. It was miles away from what the internet is today! (laughs) I was also lucky enough to have a father who had quite an extensive record collection."

Your father being of Nigerian descent, was there ever a change you might have opted for afrobeat instead of falling in love with reggae?
Raphael: "Well like him, I love Fela, but afrobeat is just not as popular in Italy as reggae is. In high school, most of my friends knew what reggae was, but I doubt many would have known about afrobeat."

At which stage did your love for music also start pushing you towards the stage?
Raphael: "For me it was back in 2002, when Ju-Bamboo, the club I already mentioned earlier, organized a summer event on the beach featuring bands like Pitura Freska and Sana Pianta, who were our local heroes from Savona. I had already told Andrea (Bottaro, red.), one of my best friends who's now the bass player in my band Eazy Skankers, we should start our own reggae band a number of times; at the time he was still into grunge, so he wasn't immediately convinced, but at this event we just looked at each other and said: "Let's go for it!".

At first you were just a member of Eazy Skankers, but at one point you also started pursuing a solo career. Is the band still very much alive or what's the story there?
Raphael: "It is! We released two albums ('To The Foundation', 2009, 'Changes', 2011, red.), but then I also started doing sound system shows on my own and eventually also did some shows with local bands abroad, like Asham Band here in Belgium for example. At the same time Easy Skankers were also starting to do gigs as a backing band for Jamaican artists coming over to Italy. They are still the main band I work with and the 'Mind VS Heart' album contains no less than three songs I recorded with them, so the link is still there."

With Eazy Skankers yu also travelled to Jamaica at one stage. Which impressions did that trip leave you with; what did you bring back with you?
Raphael: "I've got a lot of good memories about that trip back in 2008 and it also left me with the knowledge that I was on the right track. Up until that point I wasn't too comfortable with singing in English yet and felt a bit guilty about doing reggae music without ever having been to Jamaica. When I noticed the artists and technicians we met over there were digging our vibes, it was like a boost to my self-esteem."

You just mentioned 'Mind VS Heart' there, your debut solo album, which immediately launched your name on an international level.
Raphael: "Oh yes, absolutely and I definitely want to credit Irievibrations Records from Austria for that, because they made sure the album got the promotion and distribution it deserved. With the Mind VS Heart tour I got to play in over fifteen different countries, so I can't really complain. It was actually Tomic (Thomas Lechleitner, red.), one of the three brothers behind the label, who contacted me, told me he really liked my music and wanted to do something together. They proceeded to send me some riddims and I also did a show for them in Tirol; after that the whole album thing was kind of a logical consequence."

There's also this Belgian connection, as recently you've started collaborating with Asham Band. How did you guys link up exactly?
Raphael: "For that connection I really have to thank my Italian booker, Fulvio (Impellizzeri, red.), who was in touch with Mike (De Herdt, red.) from Music Got Soul, who's also the manager of Asham Band. Fulvio sent some of my music to Mike. He liked what he heard and I already played my first show for him last year in December at the Jamaica Jamaica event in Kavka where I did a showcase set opening for Chezidek. It was also then that I was introduced to the guys of Asham Band."

If there's one tune on 'Mind VS Heart' that stands out, it has to be 'Soundblaster', the style of which reminded me somewhat of Alborosie. Would you agree?
Raphael: "Yes, of course, it was Alborosie who kind of brought back that rub-a-dub style or that Sly & Robbie type Black Uhuru flavor if you want. The song actually talks about the fact that these days it's starting a sound system or a career as a reggae singer or deejay has become almost too easy, so it's good to remember the old days once every so often when passion and music still came first. Sadly enough, these days I often get the impression music is the least important thing in the music business!"

You can turn it any which way you want, but reggae and Rastafarianism are undeniably linked. What, if anything, does that whole livity represent to you?
Raphael: "I truly respect Rastafarian culture and can find myself in a lot of what they say, think and do. I've integrated large parts of the Rastafarian livity into my own life, but I draw the line at organized religion. I'm not the kind of person who likes to be told how to live and think. A lot of people also talk the talk, but don't walk the walk and Rastafarians are certainly no exception there. I prefer to say that love is my religion and together with oneness, I think that's also at the heart of what Rastafarianism is really about."