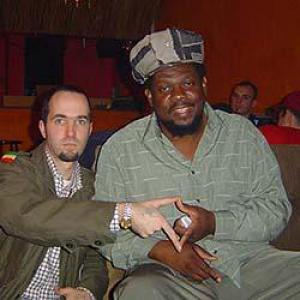 Seldom has a reggae legend passed through Belgium so unnoticed than deejay veteran and prime student from the school of U Roy, Ranking Joe at Dali's Bar in Brussels. In a tiny basement the man spent over three hours giving all he had, and that meant pure toasting in the best Jamaican deejay style! The absent were once again in the wrong. Just before his show we had a relaxed conversation (for which I want to thank Anthony Lesire from Dali's Bar and Luc from Education Records):

Ranking Joe, could you tell me if you remember what that first inspiration was that brought you to music? What made you grab the microphone?
Ranking Joe: "Well, that was an inborn inspiration from the Father Jah Rastafari down to my father. My father used to play in and operate a soundsystem, so I got my inspiration from him. He would have his soundsystem at home and instead of buying lunch, I would spend my money on records of people like U Roy, I Roy and Dillinger. I then listened to their style and tried to create my own. When there was a soundsystem playing in my area, I would beg them to give me the microphone and luckily the people seemed to appreciate me. In secondary school I used to do some concerts too with people like Winston McAnuff, U Brown and Earl Sixteen. We all went to the same school. Then I won a talent show at a club and when that happened I decided to take things a step further and so I went to Studio One to see Sir Clement 'Coxsone' Dodd. He recorded my first song in 1974 called 'Gun Court' because that was the time when Jamaica started to be flooded by guns. Johnny Clarke did 'None Shall Escape The Judgement' around the same time. There was a whole number of songs about guns."

You were called Little Joe first and then changed your name to Ranking Joe. Where did those names come from and who gave them to you?
Ranking Joe: "You give yourself a name, because as an artist you want a name that people remember. If I would have been a singer I would have kept my original name Joseph Jackson, but most deejays gave themselves a name that came from a movie; names like Dillinger or Clint Eastwood, something dramatic. I chose Little Joe because I liked to watch Bonanza on television. But then, my popularity grew, so people would come up to me and say: "Why are you still calling yourself Little Joe?" and then Prince Tony started to call me Ranking Joe because you also had Ranking Trevor and Ranking Barnabas at Channel One. Luckily my fans liked the name so it stuck."

As a deejay you always have to sing over tunes of other artists. Did you have any favourites and didn't you ever feel like singing yourself?
Ranking Joe: "There are a lot of tunes! I never started out as a singer, so about singing I don't really know but I actually did one album where I do a straight vocal. The album is called 'Dub It In A Dance' which was just re-released by Trojan Records. The deejay business has changed a bit from my time because nowadays the deejays tend to sing a bit too like Sizzla and Capleton do."

You're referring to the singjay-style?
Ranking Joe: "The singjays, yeah that's it! What we did was sing the chorus and then the crowd would get involved and after that you'd do the verse."

Your main example and teacher was U Roy. Who is he to you?
Ranking Joe: "He is the godfather, the creator, a great man! He made that many people could live from this trade (being a deejay, red.). He in his turn learned his style from Count Machuki and brought it to a different level. Give thanks for U Roy and for me getting the privilege to work beside him. He respects me and I respect him."

You're known to be a devout Rastafarian. How did Rastafari come to you?
Ranking Joe: "I lived in an area where there were a lot of Rastafarian elders around and I saw them doing a lot of conscious things. There were a lot of youths involved in crime and things and there was a lot of political warfare going on in those days, but because of my music I didn't get involved. The Rastafarians would tell the youths: "Youth man you have to do so and so and so..."; they are the only set of people that inspired me and that are able to tell of things even before they happened! At that time they were still considered as underprivileged or dirty people. Today I can clearly see that the world is about Rastafari because many try to imitate it now. Like how you see it with the dreadlocks; everyone is wearing them now. Now it is called fashion but back then they wouldn't even look at that. You see what I'm saying?"

Yeah man!
Ranking Joe: "I saw things come to pass that they were saying already back then, like living on organic foods for example and looking at vegetables for your nourishment."

It was like prophecy fulfilled for you?
Ranking Joe: "Yeah, just like that! That's how I got inspired by Rastafari and it's a guideline for me. I don't just try to live it, but I really try to abide by it because thought me what to do and what's not to be done. As a Rastafarian you have to remember yourself you're not a regular person. Rastafari shaped me and protected my career along the way. I'm not saying I'm perfect but I try!"

You're aspiring for the highest?
Ranking Joe: "Yeah, that's what I'm saying (laughs)"

Recently there have been a number of re-releases of your albums: 'Weakheart Fadeaway' on Greensleeves, 'Dub It In A Dance' on Trojan and the 'Zion High' album on Blood & Fire. There seems to be a renewed interest in Ranking Joe.
Ranking Joe: "Yes! I lasted because I've been working very hard in the circuit. I'm all over the place; I just came back from New Zealand and Australia and here in Europe I'm doing gigs in Germany, France and Italy. I'm working alongside Education Records now with a brother called Luc. Just keeping very very busy developed a demand for those re-releases and there's more to come on the Ranking Joe label. I'm on a mission now, campaigning on the road to meet and greet the fans."

To end the interview I would like to give you some names and you can just reply by telling us what they mean to you. Let's start with your homeland: Jamaica?
Ranking Joe: "I love Jamaica because that is where everything originated music-wise.  In the near future I'm going to be there more often again. After being on the road for so long I want to cool off a bit and do some recordings."

Another base for you: New York?
Ranking Joe: "Yeah, indeed, that's another base for me. I migrated from Jamaica, settled there and played on some sound systems like African Love and Downbeat and helped to shape and build the scene over there. It is also where my label, Ranking Joe music, is based."

In conclusion, the man Ranking Joe, as a musician and as a person, what does he represent?
Ranking Joe: "I represent Rastafari! I'm one of Jah's soldiers. I'm on a mission. As a leader in my own way I try to inspire and educate the people about Rastafari and love, because we need more love in the world today. And if I have to be remembered, I want to be remembered as one of the great deejays and as a man who preached the word of Rastafari in his own way. Blessed, Rastafari! Jah live!"