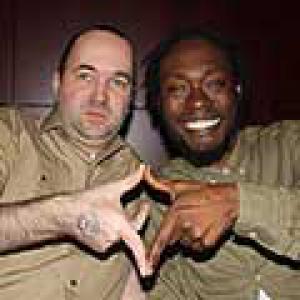 Randy, you spent your childhood and most of you adolescence in Jamaica, but moved to the UK in your late teens. Would you say you experienced a so-called culture shock?
Randy Valentine: "Well, I wouldn't describe it as a shocking experience, as I'm always open to experiencing new things. I've never gotten used to the cold though and I still miss Jamaica from time to time. About two years ago, I returned to Jamaica for the first time in about a decade, so that was definitely an overdue homecoming."

Back when you were still living in Jamaica, your dad was active as a selector for a local sound system scene as a selector, something you also had a stab at, but at which point did you start contemplating doing something with your voice?
Randy Valentine: "I've been singing for as long as I can remember, even before I became a selector; wherever, whenever, I'd always be singing. Selecting was the thing I saw my dad do, so that's how I got introduced into that world. Every weekend he'd set up the sound system somewhere. When I came to the UK, I got a job working at King's College Hospital in London and a bredrin of mine called Blemish Blackstone, who's my manager now, came up to me one day saying he always heard me sing everywhere and he wanted to take me to his studio to see if we could take it to another level."

What exactly did you do at the hospital, if I may be so bold?
Randy Valentine: "My career, if I can call it that, at Kings College was somewhat like a movie script… I started out washing pots in the kitchen, moved on to the hot plate, subsequently became a supervisor in the kitchen - basically the guy watching the other guy flipping the burgers (laughs) - and finally they moved me to their finance department. It was a time when I just needed a nine to five job to make a living; definitely nothing spiritual though, and the more time past, the more I started feeling I should be doing something more valuable with my time. I also wanted to grow as a person, and I didn't feel continue to work there would allow me to do that, so one day I just quit."

You guys then proceeded to build a recording studio in of all places a crypt of a church!
Randy Valentine: "(laughs) My first recordings I did at Mad Professor's Ariwa studio, but to be honest I'd already been there for years before I realized it was Mad Professor's studio! I got to know him as Neil, so I didn't have a clue until he finally told me and showed me who he was and what he did. Coming from Jamaica I wasn't too familiar with the UK reggae scene and I'm still learning. The studio in the crypt you are referring to Saint John's Church in Stratford (London, red.). We've been there for around five years now."

Have you been performing as Randy Valentine from the very beginning?
Randy Valentine: "I started out as Sincerely Randy, but I felt it didn't work. I only learned the meaning of the word "randy" (overly excited in a sexual manner or horny, red.) when I moved to the UK. (laughs) One day my teacher asked my name and when I replied it was Randy, she asked if was intentionally trying to be rude, so I replied: "No, sincerely, I'm Randy". That's how that whole thing got started. But as I just said it didn't work, so after a while I switched to Randy Valentine."

I'm also guessing it's not the worst name to have for a singer living in the country that's the cradle of lovers rock?
Randy Valentine: "Yeah, there's that as well of course. It goes hand in hand with some of the music I do."

At one point you also hooked up with the Hemp Higher crew from Switzerland. How did that connection come about?
Randy Valentine: "My own crew is JOAT or Jack Of All Trades. Big up my brothers Jonathan 'Jae5' Mensah, Nathan, Traz and Channy. The Hemp Higher thing now… One day Blemish introduced me to a UK dancehall artist called Mr. Midas. He wanted me to do the harmonies for a riddim he got from a guy called Riga in Switzerland. When Riga heard the harmonies I'd done, he absolutely wanted to meet up with me and that's how the ball got rolling."

For 'Bring Back The Love', your first mixtape, you strictly focused on Studio One riddims. Is that also the music that inspired you on a personal level?
Randy Valentine: "Definitely, but if I'm really honest I have to say that one of my favorite artists of all time is Lucky Dube. Apart from that there's Peter Tosh, but also people like Sam Cooke, Tracy Chapman… I just love the honesty and upfrontness of their music. And on the lovers side I definitely have to mention Beres Hammond and the late Dennis Brown. I've always felt that reggae music won't allow you to lie or try to be something you're not. If you still try to do that, you're music just won't sell."

You also seem to be the kind of artist that tries his best not to be pigeonholed. I'm now referring to your most recent 'Radio Music' mixtape, for which you opted to use hip-hop riddims.
Randy Valentine: "Because that's also part of the music I grew up listening to. To me there was a lot of truth in the hip-hop that was created in the nineteen nineties and from the comments I'm getting from people who've listened to the mixtape it's like a throwback experience for most of them as well. In all honesty I also wanted to try and introduce reggae to youngsters who at the moment are perhaps only listening to hip-hop, presenting it to them in a format they might find easier to digest."

How are you progressing on producing a debut album?
Randy Valentine: "Personally, I'm not in any rush… Now that most of the labels have gone, the set of rules that came with it have also disappeared, so there's no real necessity anymore to produce albums. I think today's music lovers will be with you as long as you remain creative and turn out new music in one form or the other, be it as a single, an EP, a mixtape or an album. To me producing an album feels a bit like a calculated business move. Not that that's not important as well, but for me it's all about the music and as an artist I feel I have still some growing to do before I'm ready to take that step. There's a lot more to see and learn."

Growing up in Jamaica, did you have a Christian upbringing, were you raised Rastafarian…
Randy Valentine: "Growing up around music in Jamaica, there will always be some Rastafarian influence, and growing up in Jamaica in general, there's no escaping the church. Just in my neighborhood you had about ten different churches! Both Christians and Rastafarians quote from the Bible, so they're not that different in some ways and the essence of both ideologies is love. My mother never used to go to church and she used to tell me: "God is inna your heart! I don't need no preacher or pastor to remind me he's there.", but my grandmother was a regular and she even made me a special yellow suit to wear to Sunday service. I've always carried my mother's words to heart to and also don't feel I need to go to a certain building to get closer to God. In this world there are too many people pretending they know the truth or know what is right and what is not!"