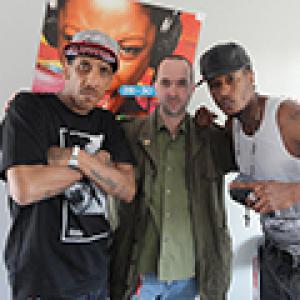 Big Red, Daddy Mory, even though Raggasonic has only released three albums in a timespan of about twenty years and the fact you guys put things on hold for a while, it's still by far the most popular band in French reggae. Is there such a thing as a Raggasonic success formula?
Daddy Mory: "Nothing we did was ever premeditated; things just started happening and we enjoyed the ride! Even our talent developed kind of organically; we never took any singing classes or what have you; our roots are in sound system."
Big Red: "We prefer that people see us as one of their own and not some kind of superstar. We don't consider ourselves to be any better than anyone else. In our lyrics we deal with the same things a lot of people in society are experiencing on a daily basis; the only difference is that we have the luxury to ventilate on stage. Luckily so I would say, because I honestly don't see us doing much else! (laughs) I guess you could say we're sort of activists, passively resisting through our music."

In all honesty, the flow between the two of you is hard to copy.
Daddy Mory: "That chemistry is part of the magic that is Raggasonic and even we don't know how to explain it."
Big Red: "That being said, we more or less grew up with the same musical background and we were both inspired by the same reggae classics."
Daddy Mory: "When we started there were plenty of artists out there doing more or less what we were doing, but between the two of us, there definitely was and still is that little something that makes the difference."

Content-wise there's definitely a militant, rebellious side to your music.
Big Red: "That's part of reggae music… We weren't into lovers, so the only thing left was talking about reality."
Daddy Mory: "Our music is rudeboy music, but being a rudeboy doesn't necessarily mean talking badness! Of course there's a lot of music out there that's rooted in dancehall culture, but Jamaica is now enjoying a whole new wave of conscious music with a lot of fresh talent trying to catch a break, but also dancehall artists like Busy Signal who are steering their career in a new direction. In Jamaica, reggae and dancehall are like living entities that keep changing and evolving."
Big Red: "We try to be respected by our elders and not to put just any garbage in the heads of the youths!"

How does a new Raggasonic song come about? Is that a collaborative effort or is it each one to his own?
Daddy Mory: "It's a bit of everything really. We start out deciding in what direction we want to take the song in question. After that, we each do our thing. Then we listen to each other's contributions and correct one another where necessary. After all this time, we've become a well-oiled machine and doing things this way really works for us."

During all these years you guys remained faithful to Frenchie, sometimes referred to as "Raggasonic's third member". Why him and not a dozen other reggae producers out there?
Daddy Mory: "For starters he's French, which for us makes it a lot easier than to work with someone whom we'd have to explain or translate things to all the time."
Big Red: "He also proved his worth from the very beginning. As a link with Jamaica for example; at the time we knew who we wanted to work with over there, but we had no idea how to get in contact with these artists and that's where Frenchie's connections came in very handy. Frenchie has also opted to do conscious music and like us he's a bit of an activist. When we were just starting out, he also thought us some basic essentials; at that time we were just two youths freestyling away, doing verse after verse without even thinking of putting in a chorus. He calmed us down a bit and showed us how to build a song. He really taught us a lot!"

For 'Raggasonic 2' you guys travelled to Jamaica. What did that trip leave you with?
Daddy Mory: "It was great to be able to see firsthand how these local artists approached this music we loved so much. We might have a passion for reggae music, but for a lot of people over there it's not even a choice; for them it's one of a few ways they can hope to escape poverty. Trying to find their way in the music business, often being confronted with a lot of setbacks and disillusion, they still manage to show an unbelievable amount of patience."
Big Red: "We weren't new to the ghetto as such, because where we grew up it wasn't much better sometimes, but in Kingston the ghetto and the world of music are intertwined, resulting in a pure and harsh reality that is definitely out of our comfort zone, but which also makes things very exciting. It was an incredible experience!"
Daddy Mory: "We just needed to see with our own eyes where this music that made us go crazy as far back as we could remember came from."

Would you agree if I say your latest album, 'Raggasonic 3', is a logical continuation of the previous one, even though they're almost fifteen years apart?
Big Red: "That was exactly what we set out to do. Before going off into new horizons, we wanted to rekindle our relationship with our hardcore fans from back in the day who'd continued to support us over the years. That being said, no matter the music we will always sound like Raggasonic. For this album we decided to stick to our well-known rub-a-dub formula with a few more experimental tracks thrown in for good measure."
Daddy Mory: "When we found ourselves in the studio again after so many years, it was as if we'd parted ways the previous day, so the fact the album sounds like a continuation of the previous one is in a way only logical. Music is our lifeblood!"